• Busting the Myth That Active Funds Do Better in Difficult Markets: Investors should focus on the long-term signals, pick their spots, and keep a close eye on costs, based on analysis from Morningstar’s midyear Active/Passive Barometer. (Morningstar)
• The Rise of Work-From-Home Towns: People have fled cities during pandemics throughout history, and generally returned afterward, so their current seeming unattractiveness probably isn’t a reliable guide to the future. (Bloomberg)
• The tyranny of chairs: why we need better design: Sitting for hours and hours weakens your back and core muscles, pinches the nerves of your rear end and constrains the flow of blood your body needs for peak energy and attention. Most of us are largely unsuited to extended periods in these structures. (The Guardian)
• Target Is Having a Pretty Good Pandemic: General merchandise retailers have done especially well under COVID: Early in the crisis, customers stocked up on necessities, including groceries. People kept buying more groceries than usual, because they have been eating out less. Millions of Americans shifted to work from home, and needed supplies like office chairs and computers. (New York Magazine)
• Blank Check IPOs, the Status Symbol of 2020, Have Raised $32 Billion This Year: The boom in SPACs—special purpose acquisition companies—reflects investors’ search for better returns in a low-rate world. (Businessweek)
• Bridgewater Is Having a Bad Year. David McCormick Has a Plan. Can the war veteran and former Treasury official reboot the world’s largest hedge fund?(Institutional Investor)
• Contracts, hacks, and Google: What to consider before you get a home security system Consumers have more choices than ever to protect their homes, but those choices come with trade-offs. (Vox)
• The Conscience of Silicon Valley Tech oracle Jaron Lanier warned us all about the evils of social media. Too few of us listened. Now, in the most chaotic of moments, his fears—and his bighearted solutions—are more urgent than ever. (GQ)
• Congress left town and let jobless benefits lapse. Unemployed Americans say they won’t forget it. Millions of desperate Americans, many of whom have never relied on emergency government assistance before, are flabbergasted and furious, believing they have been cut loose by a Washington political structure that doesn’t care about their predicament during the pandemic. 28 million people saw unemployment benefits drop on Aug. 1 from >$900/wk to ~$300. (Washington Post)
• The Dirtiest Hot 100 No. 1s of All Time Before “WAP” If “WAP” is the filthiest, dirtiest, most sexually explicit song to ever top the Billboard Hot 100, someone has to be second-dirtiest. And if there’s one thing we’ve learned from “WAP,” it’s that you people love that kind of stuff. (Slate)

Did Trump Create Or Inherit A Strong U.S. Economy? 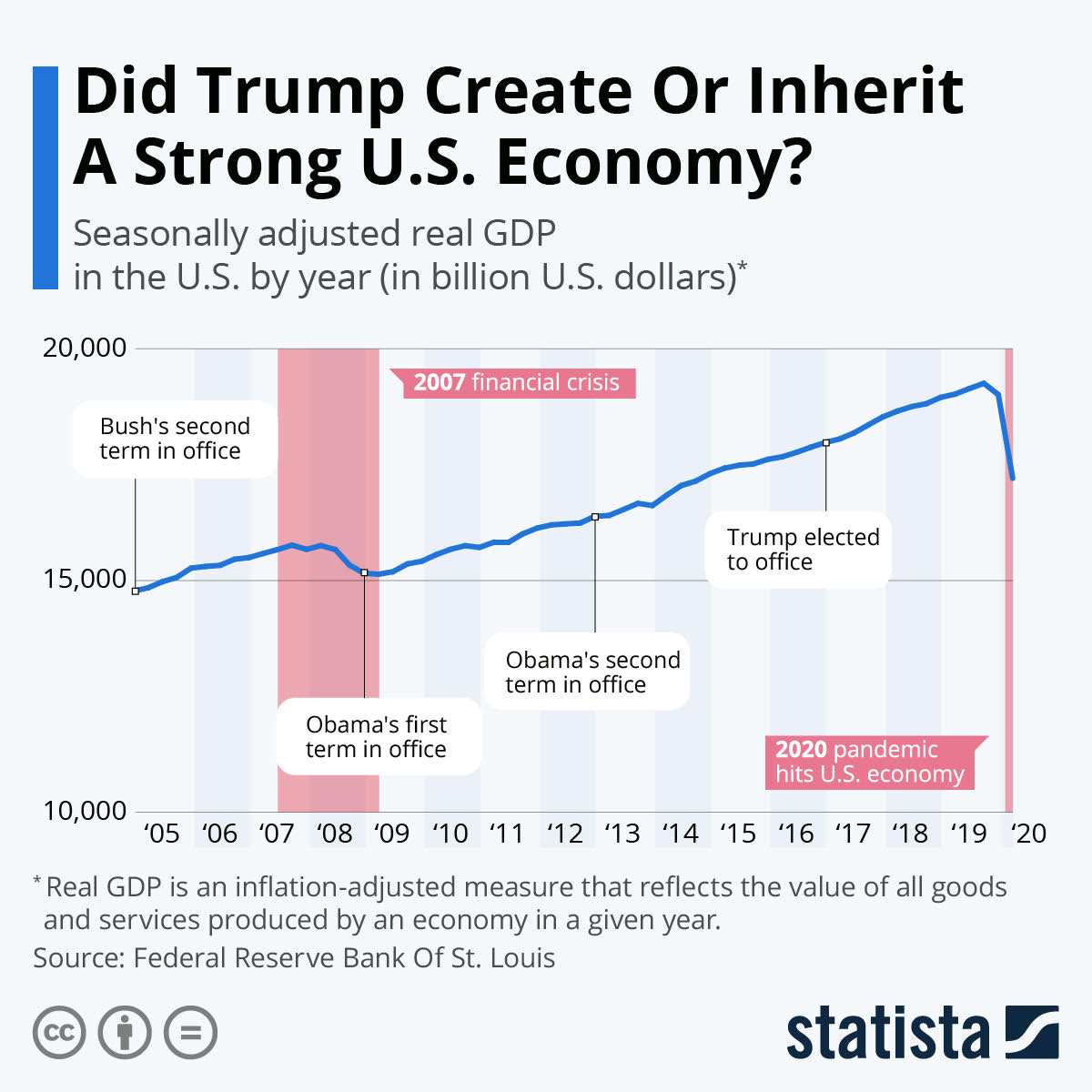