My back to work morning WFH reads:

• Bull Case / Bear Case: You could make a compelling bull and bear care for every asset class or market right now. What you believe about these cases depends on how you’re positioned or what you believe about investing. (Wealth of Common Sense)
• From bitcoin to QAnon: bits to qbits: Here’s why it’s also wrong to dismiss QAnon as simply the ravings of mad people: there is something sophisticated, sinister and familiar in its modus operandi. If you examine QAnon closely it follows a playbook. The one established by bitcoin. (FT Alphaville)
• Financial Firms Fail to Own Up to Advisers’ Past Misdeeds: New streamlined SEC disclosure meant to aid investors often leaves them in the dark. (Wall Street Journal)
• Insider Trading Is Rife With No Regulators in Sight: From ADT to Fitbit, intense trading precedes official disclosure of corporate transactions. (Bloomberg)
• The Crowding-Out Myth: The argument that public investment invariably “crowds out” private capital is wrong both theoretically and empirically. States have always played a leading role in allocating capital, either through direct investments, or by deliberately encouraging certain types of private investment. (Project Syndicate)
• Cities and States Are Facing a $1 Trillion Budget Mess. There Will Be More Trouble Ahead. “It’s worse because the revenue shortfall is uncertain and horrific. There’s an enormous loss of revenue going on, and we don’t know how long it will last.” (Barron’s)
• How Fraud and a Broken Publishing System Fueled the Vaccine-Autism Myth: What has caused the breakdown of our scientific ideals and systems? Four main culprits—fraud, bias, negligence, and hype. (Behavioral Scientist)
• White supremacists and militias have infiltrated police across US: A former FBI agent has documented links between serving officers and racist militant activities in more than a dozen states (The Guardian)
• Trump’s Presidency in Seven Metrics: On Inauguration Day in 2017, we chose benchmarks for his administration’s progress. The results are in. (Bloomberg)
• How Will the NFL Season Be Affected by the Coronavirus Pandemic? Regular season set to start Sept. 10; billions of dollars are at stake for league, TV networks. (Wall Street Journal)

GDP is the X axis, the stock market is the Y. 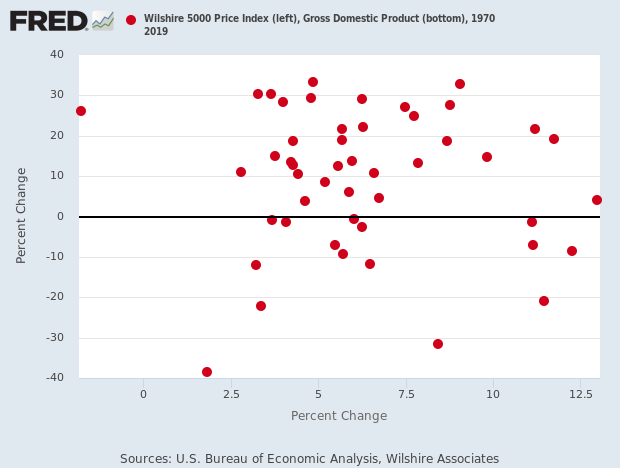 The post 10 Monday AM Reads appeared first on The Big Picture.