S&P 500 back and fill coming amid bullish stats | MrTopStep.com
Skip to content

You can shout, you can scream, you can stomp your feet, but you know what? The S&P is going back up and it’s called “S&P back and fill.” 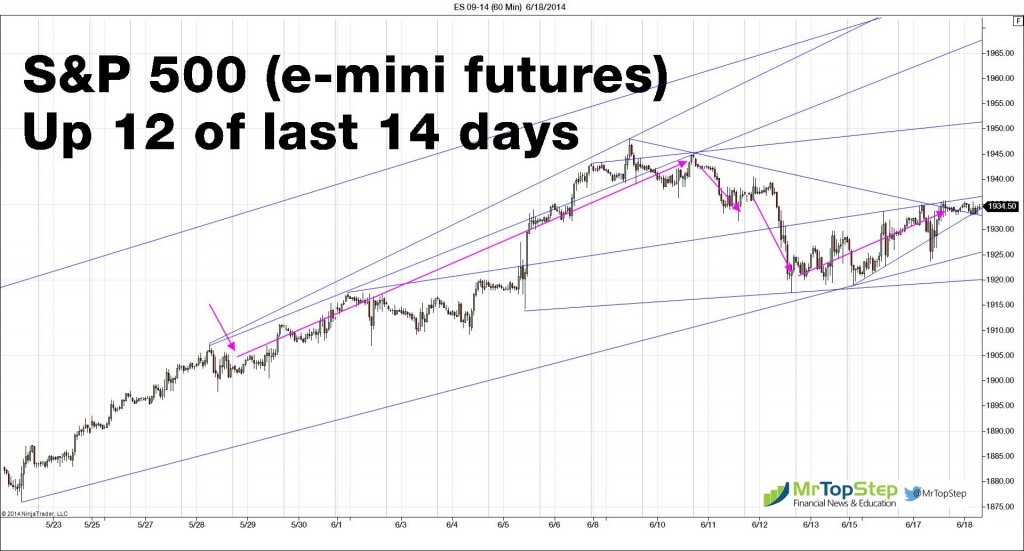 We are going to stick to the basics: The overall price action remains unchanged. Over the last 3 years the S&P has had an uncanny ability to make good of bad news. The S&P (CME:SPU14) also has a tendency to react to the headline(s) and within a few days regurgitate it and move on.

I am not saying that the coast is clear in Iraq, but the original headlines that helped push the E-mini (CME:ESU14) lower are now old news. Besides that, I am not sure that there was not an overreaction in crude prices over the ISIS headlines.

Can they inflict more damage? Sure—especially since they captured a lot of American weaponry abandoned by Iraqi soldiers fleeing Mosul—but world powers will work together. In the end, ISIS numbers about 10,000 at most and doesn’t even have the support of all Sunni factions.

The negatives are clear to see: a very overextended stock market, no 10% correction in almost 3 years, all sorts of geopolitical problems both financially and militarily—and still, the markets refuse to go down.

While I am sure there are more dots to connect, I really believe the zero interest rates are behind the neverending rally. Sure the Fed’s bond buying programs have helped, but while that is being pulled the S&P has skyrocketed.

Plain and simple, there is no place to put your money but stocks. While the end of June is in sight the volumes will continue to drop, the VIX will go back down, and the S&P will take advantage of the “thin to win” environment.

As more people cut back and go on vacation, stocks will start to drift higher again. And the market will continue to digest the bad news as it has done for the last 3 years. This isn’t about charts, this is not about moving averages or put/call levels, it’s about one thing and one thing only: There’s nowhere to go but stocks.

I can’t say I have been immune, but I hate myself when I do it: I sell a rally and get it in the face. I knew when they were down that my call was to buy the weakness; I even saw and pointed out the the buy imbalances on the low of the day. I see the premiums move and what do I do? I miss the long and sell the rally.

I know that good traders can play both sides of the ES, meaning they can sell the rally and buy it when it goes down, but the odds favor buying the declines. No one knows when the upside party will end, S&P 1950, 1980, 2010? How high is high when the S&P is up almost 190% from its October 2009 lows?

Most would say the S&P is overdone—sell it. But the correct mentality should be simply this: “The trend is 100% your friend” and the S&P proves that almost every day.

Just look at the up and down days over the last 3 weeks. Take out the Iraq stock selloff and the S&P has not had a 2-day decline since April 9th and 10th. If you’d been on a news vacation from the 6th through the 12th, you’d think nothing happened.

Conclusion: Sometimes it’s best to go with your feel, your gut instincts. Price action can take some time to appear as a chart pattern, and even longer to appear in a lagging indicator.

Yet what appears first as just a “feeling” is what turns the markets. You’ll see it happening right before your eyes. You’ll feel it in your body. But if you’re too caught up in theory or your preconception of what the market “should” be doing (in response to today’s FOMC statement, for example) you won’t be able to act on what the market actually is doing.

Remembering basic patterns and going with the trend instead of fighting will make your work a lot easier. Sometimes it really is as simple as “buy low, sell high, don’t lose money.”

Our View: Bullish or bearish, I think it’s all about the expiration stats, which turn very positive on Thursday and Friday’s June Quadruple Witching.

As I have been saying for the last few weeks, there are just too many bullish events going on in the middle and end of June. Our call is that we see a sideways to lower trade.

The June-September rollover is ending and today is the second day of the FOMC and decision. I don’t think the Fed will say anything other than what it has been saying: continue to taper and look for signs of inflation.

As always, please make sure to use protective stops when trading futures…