Apple’s stock fell more than 5 percent Wednesday after the cheaper iPhone introduced Tuesday raised concerns the company was not being aggressive enough in its fight against Google’s  Android operating system.

Apple’s shares were down about 5.6 percent at $466.51 in midmorning trading Wednesday, a day after it unveiled the 5S, a high-end iPhone with a fingerprint scanner as well as a cheaper 5C model targeted at emerging markets.

“… We worry that Apple’s inability/unwillingness to come out with a low-priced offering for emerging markets nearly ensures that the company will continue to be an overall share loser in the smartphone market until it choses to address the low end,” Sanford C. Bernstein analysts said in a note.

Still, Bernstein maintained its “outperform” rating on Apple’s stock, saying it expected the new iPhones to have little impact on gross margins.

Nomura Equity Research analyst Stuart Jeffrey, who raised his price target for Apple shares to $480 from $420, said Apple may have ensured stable margins for the next couple of quarters by pricing the 5C at $99 with a contract and $549 without.

This was not enough for BofA Merrill Lynch, Credit Suisse or UBS, all of which downgraded Apple’s stock to neutral.

“Rather than offer attractive pricing for consumers, and move the iPhone 5c into a new and growing price segment, Apple retained a premium pricing strategy in targeting the $400-800 smartphone segment,” Credit Suisse analyst Kulbinder Garcha said in a note.

“This segment is not forecast to see meaningful growth long term. This decision, at the margin, is good for profitability but not growth.”

Garcha said that Apple’s share of the smartphone market, where it faces intense competition from Samsung Electronics Co Ltd, would likely fall to 15.5 percent this year and 13.1 next year from 18.1 percent last year.

Arcuri said gross margins for the 5C appeared to be as high as the mid 50 percent area.

Apple’s third-quarter profit fell 22 percent as gross margins slid below 37 percent from more than 42 percent in the year-earlier quarter.

“While the 5C is a first step away from the high-end, we do not think it is a big one,” JP Morgan’s Mark Moskowitz said.

Analysts at UBS Securities said that even if Apple secures a partnership deal with China Mobile in the near term, it will have a hard time competing against comparable Android devices priced 40 to 50 percent lower than the iPhone 5C.

UBS, which cut its rating on Apple’s stock to “neutral” from “buy, cited a survey of 35,000 Chinese consumers conducted by ChinaDaily.com that indicated only 2.6 percent of respondents would consider buying the cheaper iPhone at the $549 level.

Raymond James and Associates maintained its “strong buy” recommendation on the stock and raised its share price target to $675 from $600, based on expected demand for the lower-end iPhone coupled, the NTT DoCoMo relationship, and the preservation of gross margins.

Canaccord Genuity kept its “buy” rating on the stock and raised the target price to $550 from $530, citing Apple’s aggressive launch plans in more than 100 countries by year-end.

Canaccord also raised its 2014 estimate for iPhone sales to 180 million phones from 177 million.

“… We propose that Apple is a ‘storage’ company, not only levered to data creation but instrumental in driving data creation in ways its competitors are not,” he said. 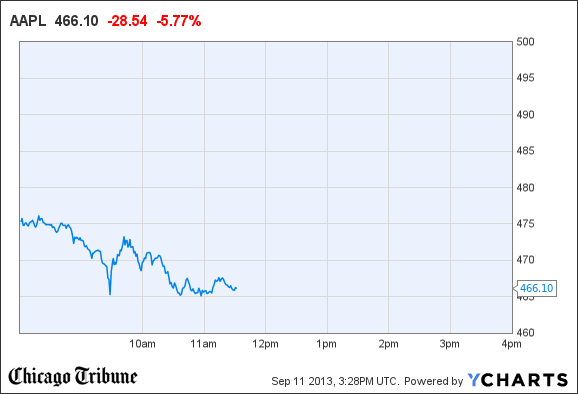 (As Seen in the Chicago Tribune)