The employment report for August will be released on Friday, September 4th at 8:30 AM. The consensus is for 1.40 million jobs added in August, and for the unemployment rate to decrease to 9.8%.

There will be two distortions in the August employment report that are worth discussing.

The August employment report will show an increase of 237,800 in temporary Census hiring under Federal employment. Since these are temporary jobs, and only happen every ten years with the decennial Census, it makes sense to adjust the headline monthly Current Employment Statistics (CES) by Census hiring to determine the underlying employment trend.

The correct adjustment method is to take the headline number and subtract the change in the number of Census 2020 temporary and intermittent workers. For more, see: How to Report the Monthly Employment Number excluding Temporary Census Hiring 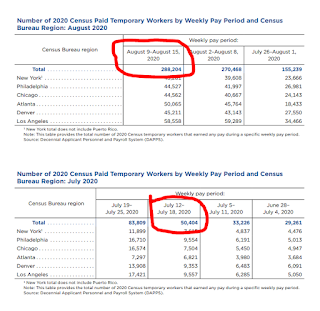 The temporary employment for the July and August reference weeks are circled in red.

This will boost August employment by 237,800 jobs.

Another distortion in the August employment report will be from education employment. There is a seasonal pattern to state and local education employment with a large number of educators usually hired in late Summer or early Fall – at the beginning of the school year – and then let go in June and July. Due to the pandemic, many of these educators were let go earlier than usual this year.

This led to a weird quirk in the seasonal adjustment for July. Although there were 960,000 state and local education jobs lost in July NSA (Not Seasonally Adjusted), this was reported as a gain of 245,000 jobs (SA). This was fewer jobs added (SA) than I expected, but it was difficult to tell how many year-round jobs had been lost.

Usually we’d expect about 415,000 seasonal jobs hired in August (and then most of the remaining seasonal employees hired in September). However, since many school districts delayed the opening of the school year, my guess is few of these seasonal jobs were filled in August.

Of course some of the year round jobs that were lost earlier in the year could be hired back.   However, since state and local governments are under financial pressure, it seems unlikely that many year round employees were hired back.

My family of four saved thousands by doing a home exchange in the French Alps instead of a traditional summer rental. Here’s what it was like.

Why Is Newell Brands (NWL) Down 8.5% Since Last Earnings Report?

Why Is Newell Brands (NWL) Down 8.5% Since Last Earnings Report?