by Contributor
in Uncategorized
0 0
0

President Donald Trump announced on Twitter that he and First Lady Melania Trump have tested positive for Covid-19. The test was carried out after close aide Hope Hicks had fallen ill with the virus. The disease has been especially risky for men, the elderly and those who are overweight. While it is not clear if Trump has any symptoms, and the majority of cases are mild, market watchers are warning that the new uncertainty over the health of the president may lead to a deeper selloff in risk assets. The diagnosis will radically alter the final weeks of campaigning for the election.

The September jobs report is expected to show a sharp deceleration in the pace of the recovery in the labor market. The consensus among economists surveyed by Bloomberg is for employers to have added 875,000 positions in the month, with the unemployment rate falling slightly to 8.2%. The report, which is published at 8:30 a.m. Eastern Time, is the last one before the election. It will not include the effects from the large round of corporate layoffs announced in recent days.

This NYC Startup Raises $51M to Disrupt the Retirement Industry

With over 110 million Americans over age 50, it’s no wonder this Princeton grad’s startup just raised another $28 million to help people conquer retirement.

Learn more about how its no-cost tool can help you plan to retire comfortably.

House Democrats passed their $2.2 trillion stimulus plan, which will not progress in the Senate, as talks continue between Speaker Nancy Pelosi and Treasury Secretary Steven Mnuchin. While those phone calls and meetings have not produced any breakthrough yet, there remains some small hope of progress as long as they continue. Data released yesterday clearly showed the impact of the ending of the March stimulus plan on incomes, while private economists are cutting their growth forecasts amid the continued failure to find a way forward.

Trump’s positive test for Covid-19 is dominating market sentiment this morning with investors moving to a risk-off mood. Overnight, the MSCI Asia Pacific Index slipped 0.3% while Japan’s Topix index closed 1% lower. In Europe, the Stoxx 600 Index had dropped 0.7% by 5:50 a.m. in a broad-based sell off. S&P 500 futures pointed to a lower open ahead of the jobs report, the 10-year Treasury yield was at 0.663% and gold rose while oil fell.

After the payrolls report at 8:30 a.m., it is a relatively quiet day on the economic data front. University of Michigan sentiment, August factory and durable goods orders data are at 10:00 a.m. The Baker Hughes rig count is unlikely to do much to move the oil market at 1:00 p.m. Philadelphia Fed President Patrick Harker and Fed President Neel Kashkari speak later. Health and Human Services Secretary Alex Azar’s testimony in Congress will probably be much more closely watched that might have been expected in light of today’s news.

President Donald Trump’s announcement that he and First Lady Melania Trump had tested positive for Covid-19 is likely to dominate markets for a while. Risk assets, as expected, took a tumble when the news emerged, and money flowed to havens like the dollar, Japanese yen and Treasuries. Betting markets snapped, showing an initial sharp divergence in odds for a Republican versus Democratic victory in the Nov. 3. election.

Suffice to say, Wall Street will churn out a lot of research notes in the coming days. There was already an assumption that volatility will climb around the election, and the latest drama strengthens such arguments. Investors have been seeking protection for market swings in the event the election result is disputed. The added twist now is that volatility could also be sparked by the course of the virus on Capitol Hill.

We’ll have to wait and see if we’re in the midst of a truly game-changing event. In the short term, uncertainty will spur demand for Treasuries since investors are likely to get even more nervous about risks around the election, says Viraj Patel, a strategist at Arkera Inc. But he added there’s a limit to how much yields can fall in a “fleeting” risk-off environment. 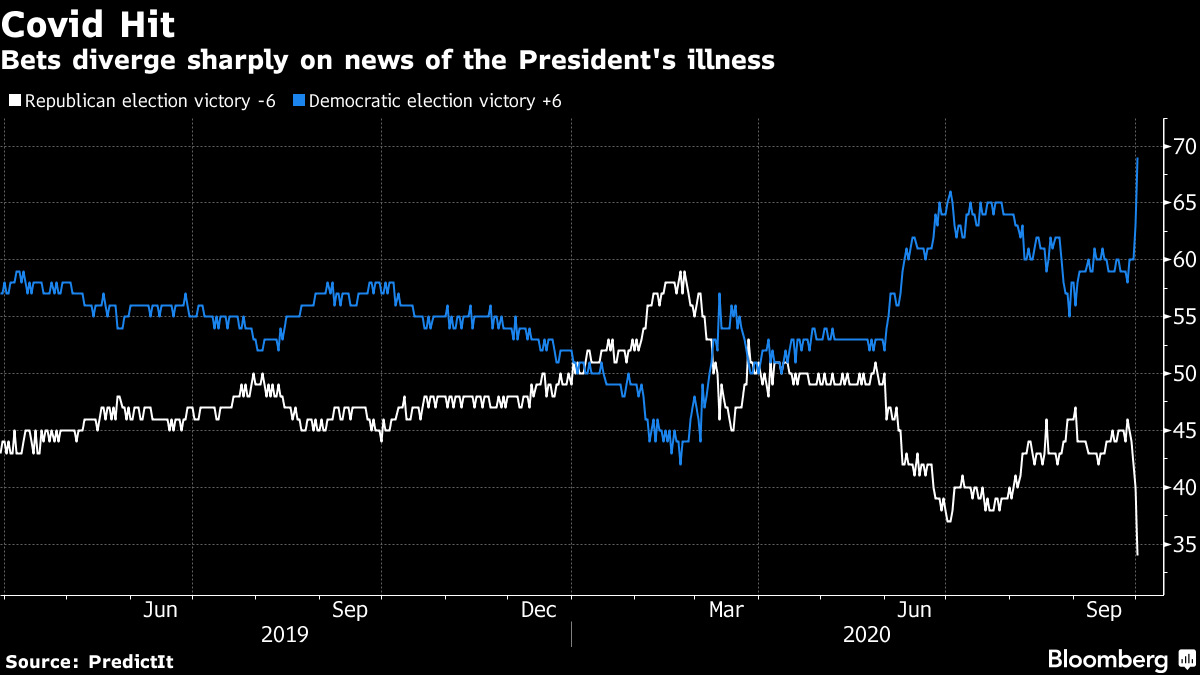 Rates experts talking earlier this week were already disagreeing about what happens to yields after the election. TD Securities reckoned the market was overestimating the prospects for a split Congress and policy gridlock, and that a Democratic sweep could drive long-end yields lower in a bull-flattening move on policy uncertainty.

By contrast, Goldman Sachs’ Praveen Korapaty sees a united House and Senate driving the 10-year benchmark as much as 40 basis points higher on the prospect of heavier government spending. That boost could close the output gap quicker than currently anticipated, and that in turn could beckon the first rate hike in mid-2023, sooner than the market or the Fed expects.