German Chancellor Angela Merkel's center-right bloc, shaken by discontent over Germany's slow vaccinations and a face-mask scandal, suffered its worst result ever in two regional elections. Voters in the southern state of Baden-Wuerttemberg, Germany's third-most populous, shifted towards Greens and Liberals, which could see Merkel's conservatives ejected from its ruling coalition there. With the country heading into elections this September and its chancellor preparing to hand off the reins after more than 15 years, this raises the possibility that its next leader may not be a conservative at all. Meanwhile, political attention turns to the Netherlands, which is set for three days of voting in its general election.

AstraZeneca is facing further pressure with Ireland on Sunday joining a series of countries moving to suspend the shot over concerns about possible side effects. The company, meanwhile, says there is no evidence of increased blood-clot risks. Supply worries and vaccine nationalism are rearing their heads too, with the U.S. saying it will hold on to its doses of the Astra vaccine and leaders of smaller European Union countries protesting "uneven" distribution of vaccines. In the U.S., the White House's chief medical adviser, Anthony Fauci, said a reluctance among parts of the population, particularly Republicans, to get a vaccine poses a new risk, though there are success stories in some corners of the country.

This week will bring a three-day rush of central bank decisions from the U.S. to Japan as policymakers confront the enthusiasm of investors betting on inflation returning. In the U.S., stimulus checks went out this weekend and could set the stage for a new retail-trading frenzy. Meanwhile, bearish warnings are appearing for U.S. tech stocks, but equities bulls are brushing off threats to the rally from higher bond yields. One of the main reflation trades in bond markets is set for a day of reckoning when the Federal Reserve presents its latest decision on Wednesday and traders will be scouring European Central Bank bond-buying data to gauge the bank's resolve in stemming long-term borrowing costs.

Bitcoin topped the $60,000 mark for the first time this weekend as investors brush aside concerns of speculative fervor, with every correction in the market seemingly providing another chance for believers to buy. Even more eye-watering are the gains can be seen in crypto-linked shares, like Bitcoin miners and trading firms, as retail investors on Reddit banned from posting on digital currencies use these stocks as a proxy for the token itself. Beyond Bitcoin, savvy investors in the area are closely watching the meteoric rise of Cardano and the mind-bending prices being paid for digital artworks as that scene explodes into life too.

Asian stocks fluctuated with U.S. equity-futures on Monday, with European futures are trending marginally higher. Oil prices are up as economic data from China added to signs of recovery from the pandemic. U.K. house-price data from property portal Rightmove shows prices rising at the quickest pace in five months amid a surge in inquiries from buyers, and the European earnings calendar is topped by a sales update from Swedish fashion retailer H&M.

Corporate treasurers beware, no matter how little or much you allocate to Bitcoin, once you express an interest your stock risks becoming joined at the hip with it. The correlation coefficient between Bitcoin and an equal-weighted basket of five stocks which have announced investments in the digital currency — Tesla, MicroStrategy, Square, Meitu and Aker — has shot up to an average of 0.72 this year from 0.26 in 2020. A maximum possible correlation of 1.0 would signify they are moving in lockstep together. Tesla’s $1.5 billion Bitcoin purchase sparked a heated discussion of its suitability for corporate portfolios with China’s Meitu one of the latest to follow suit, purchasing $40 million in cryptocurrencies. Bitcoin scaled $61,000 for the first time over the weekend on bets that some U.S. pandemic relief payments will end up chasing the digital token’s towering rally. But the cryptocurrency has also seen maximum drawdowns of over 80% on at least three big occasions over the last decade. Corporate Bitcoin pioneers should brace for a wild ride. 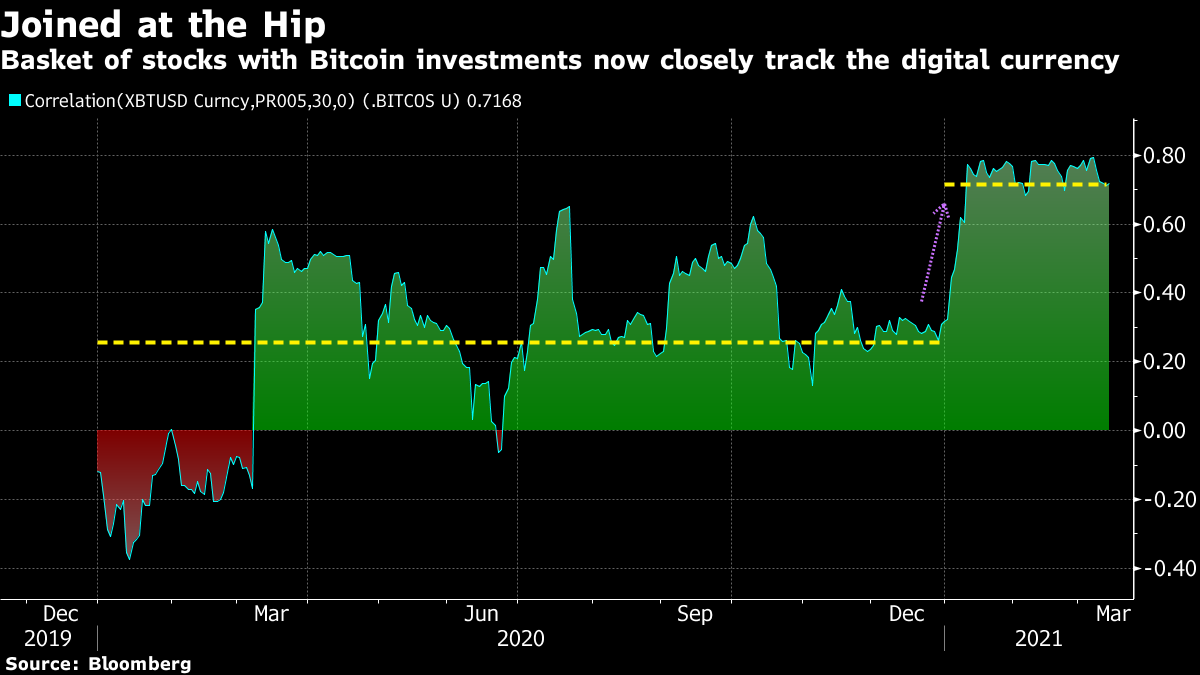