The debate over the safety of AstraZeneca's vaccine appears to be edging toward its end. The European Medicines Agency is set to deliver its verdict on Thursday but yesterday reiterated its view that the benefits of the shot outweigh the risks, while raising worries that trust in vaccines may be impacted by the suspensions some European countries put in place. France and Italy's leaders both signaled potential U-turns on the issue, hinting they are willing to allow the shot again based on the regulator's final view. France is also considering weekend lockdown restrictions in Paris to contain the virus.

The main event in a big week for central banks takes place after European markets close on Wednesday, with the latest decision from the Federal Reserve. Chair Jerome Powell will have to defend an ultra-easy monetary policy outlook amid rising inflation fears. Treasury market bears will be watching closely. Elsewhere, European Central Bank policy maker Peter Kazimir says the region's governments are rolling out stimulus too slowly. The policies of both the ECB and Fed will also loom large over the Bank of Japan later in the week, which will need to avoid any signs that it is taking its foot off the stimulus accelerator.

The latest Congressional hearing on retail investing and short-selling will take place on Wednesday, just in time for the biggest U.S. banks to start distributing stimulus checks to eligible Americans. The latter could set the stage of another retail-trading frenzy as those getting the payouts make a decision on whether to spend or save. It also comes as GameStop, the quintessential Reddit meme stock, sank for a second day, leaving it on pace for its worst two days in more than a month. And soon the whole saga may be coming to the big screen, with the founder of the WallStreetBets sub-Reddit signing with a Hollywood agency in a bid to capitalize on the fame the meme stock craze has brought.

Voters in the Netherlands head to the polls on Wednesday with Prime Minister Mark Rutte hoping to clinch a fourth consecutive term which would set him up to be the country's longest-serving premier. The biggest question for voters is less who will come out on top, and more what sort of coalition will be formed once the results are in. In Germany, following a disastrous set of regional election results over the weekend for Chancellor Angela Merkel's bloc, a new poll shows it also losing support on the national level, with the figure falling below 30%.

Asian stocks fell on Wednesday, with European and U.S. futures marginally lower too, as investors await the Fed. The International Energy Agency's monthly oil market report is due, as is inflation data for the euro-area and the latest decision from the Brazilian central bank. European earnings are relatively quiet, with Austrian utility Verbund and U.K. outsourcer Capita to update. Watch too for any reaction to Samsung's warning of a "serious imbalance" in the semiconductor market, the latest major player to flag a supply shortage in the global chip sector.

Could we have reached peak speculation? The launch of a thematic ETF can sometimes feel like the modern-day equivalent of the magazine cover indicator — the idea that once a trend hits the front pages of a prominent periodical it's likely to be over. This month alone we've seen the debut of the VanEck Vectors Social Sentiment ETF — targeted to track a basket of shares hyped online — and a filing to create a so-called fear-of-missing-out fund. The FOMO ETF, from the Collaborative Investment Series Trust, will target everything from stocks to SPACs, other ETFs, derivatives, volatility products — basically anything that reflects "current or emerging trends." A look at volumes in the key home for some of the recent speculative excess — the U.S. equity and options markets — does suggest some degree of exhaustion. Both the 20-day moving averages of bullish call option and total U.S. equity volumes look to have rolled over, albeit remain at historically high levels. Activity could of course pick up again with the arrival of President Joe Biden's stimulus checks, and there's still been no sign of a stock market "bloodletting" that could extinguish bullish sentiment. But when the history of this risk rally is written, I wonder will the FOMO fund filing feature as some sort of a watershed moment. 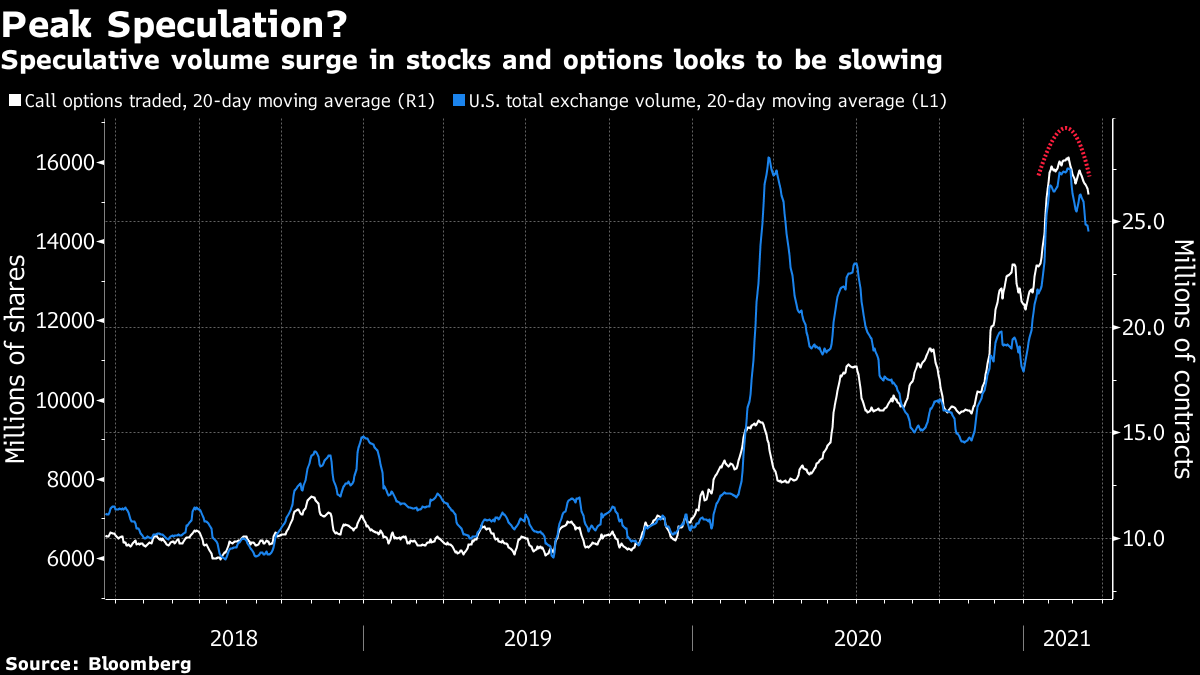 OP: All Eyes on the Fed

OP: All Eyes on the Fed