European countries, including Germany, France and Italy, are restarting using AstraZeneca's vaccine after the European Medicines Agency gave the shot its endorsement, with a caveat that it should come with a warning label to ensure the public is better informed. The EMA's support stands to give Europe's sputtering vaccination program a boost. The bloc also remains divided about the threat made to withhold vaccine exports to the U.K., even as it sits on around 20 million unused doses. The need for the program to speed up was brought into focus by France announcing a new lockdown in several regions, including the Paris area, which will last for four weeks.

This week has provided a few indications of what foreign policy is going to look like under President Joe Biden, particularly with China and Russia. Two days of talks between Chinese leaders and top U.S. officials started in Alaska on Thursday. Should those talks be fruitful, China will seek a meeting between Biden and Premier Xi Jinping next month. It hasn't started well, with the two sides immediately descending into bickering and recriminations. Relations with Russia, meanwhile, look equally rocky. Biden and Russian President Vladimir Putin traded barbs this week and the U.S. is considering new sanctions in order to block the Nord Stream 2 gas pipeline.

It's also been a busy week for central banking, rounded off on Friday by the Bank of Japan carving out more flexibility in its stimulus arsenal following a review of its policy framework. That follows the Federal Reserve hammering home a dovish message, a slightly more upbeat assessment of the U.K.'s economy from the Bank of England and a hawkish tone from Norges Bank in Norway. Emerging-market policymakers were bolder. Turkey's central bank hiked interest rates more than forecast, as did Brazil's. European Central Bank President Christine Lagarde, meanwhile, turned the focus to governments and pushing them to ensure they roll out fiscal stimulus promptly.

U.S. Democrats have proposed a financial transaction tax designed to curb risky trading behavior. There remains a chance that Americans currently receiving their stimulus checks will pump some of this money into stock markets, though with the economy opening back up, the decision about what to do with the money is more complicated than during the retail-trading frenzy back in January. New data suggests vacations will take priority over penny stocks. Still, this week has seen retail investors contribute to sending shares in German automaker Volkswagen soaring and to surges for a series of obscure names, including game makers and auction houses, linked to the NFT craze.

U.S. stocks sunk from a record on Thursday as U.S. Treasury yields hovered around the highest level for over a year. European futures are pointing firmly lower and Asian stocks weakened. Oil prices are headed for the worst weekly drop since October, selling off amid concerns crude prices had risen too quickly given mixed signals on near-term demand and a stronger dollar. The economic calendar in Europe is topped by German inflation. The earnings agenda is pretty light but it is quadruple witching day, when a number of derivatives expire and generally cause increased volatility in stock markets.

The market reaction to Fed Chair Jerome Powell's insistence that there is no need to react to rising Treasury yields and only “disorderly'' conditions would concern him has ominous portends of a car crash in slow motion. Thursday saw another bond selloff with 10-year Treasury yields hitting the highest since January 2020 as traders boosted bets the central bank will allow inflation to overshoot and let the U.S. economy run hot. The benchmark bond yield now has 2% in its sights, a level which could prompt a technical correction in the stock market of 10% or more, at least according to fund managers in this month’s Bank of America survey. But Powell's comments have given a green light for traders to test his resolve and see how far they can push yields beyond that. That increases the chances of a disorderly move not only in Treasuries but across asset classes. A bit like the parable of the frog and the scorpion, the Fed is carrying the bond market on its back as it swims to a safer shore where its support won't be needed. But the bond market is going to sting long before they both get there, because that is its nature. 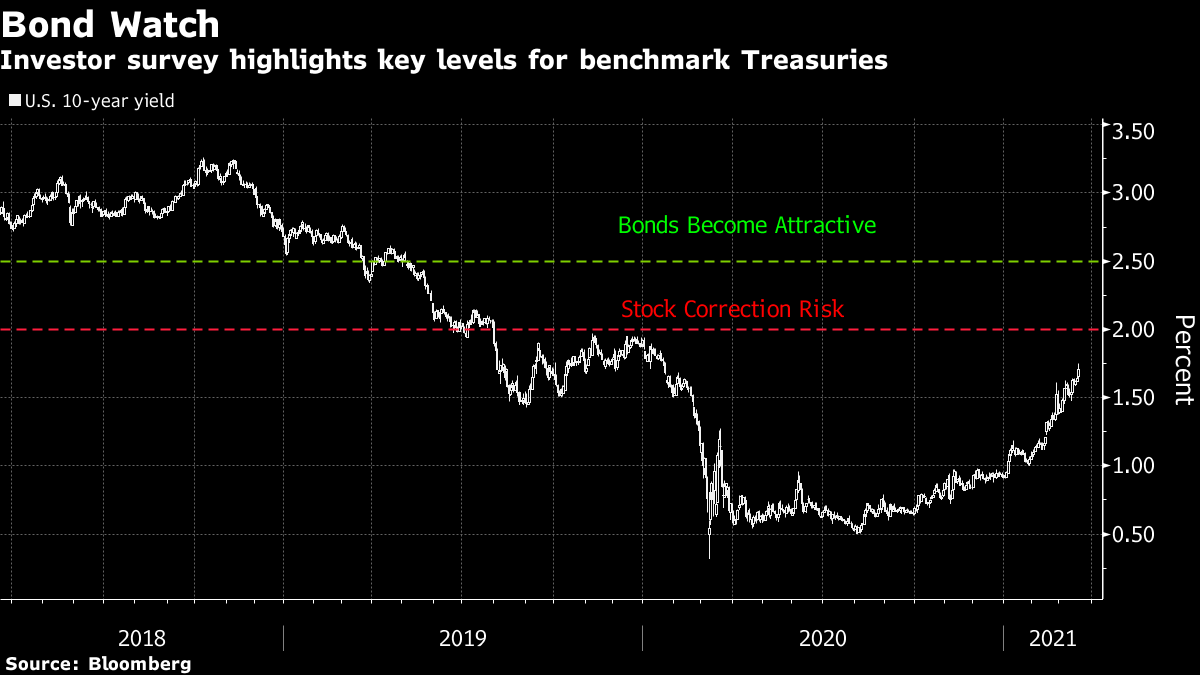