Drama returns to Turkish markets after President Recep Tayyip Erdogan ousted another central-bank governor a few days after a bigger-than-expected increase in interest rates, replacing him with an advocate of lower borrowing costs. The Lira tumbled as much as 15%, and bonds and stocks in Istanbul will likely be affected too. Keep an eye on shares of banks elsewhere that have exposure to Turkey, including Spain's BBVA and Italy's Unicredit. For Erdogan — who reckons higher rates cause inflation, rather than prevent it – it's his fourth firing of a central bank chief since taking office in 2014, highlighting how money managers can never get too comfortable with goings-on in Ankara.

Saudi Aramco will pay a mouthwatering $75 billion dividend, even after a 44% plunge in full-year profit last year as average crude production fell to the lowest level since 2011. Almost all of the massive payout — the largest of any listed company — will go to Saudi Arabia’s government. The state-owned firm says energy consumption is improving in some regions, including its main market of Asia, and predicts global consumption will be almost be back to pre-virus levels by the end of 2021. In other corporate news, Veolia has rejected rival Suez's call to drop its hostile bid for the French utility, while Credit Suisse could also be a focus after the bank's chief executive signaled he’d consider further separating the asset-management unit from the rest of the bank.

Vaccine tensions are simmering, with the European Union ready to start withholding Covid-19 shots from the U.K. as the bloc seeks to catch up on inoculations. The EU has contracts with Britain's AstraZeneca that aren’t being respected, according to an official, who warned that any vaccines and ingredients produced in European factories will be reserved for local deliveries. Meanwhile, foreign holiday hopes are fading further, with a U.K. minister describing getaways this summer as "highly unlikely." Elsewhere, Germany — which may also announce another four weeks of lockdown — could mandate quarantines for all people returning from a trip to another country, independently of infection rates at their travel destination, Bloomberg reports. Some investors are cautioning that the rebound in travel and leisure stocks may be overdone. Russia's Vladimir Putin, meanwhile, is enjoying a staycation.

EU foreign ministers may sign off on sanctions, albeit largely symbolic ones, against China today over human rights abuses related to Beijing’s alleged mistreatment of its minority Uyghur population. The measures would target four nationals and one entity, Bloomberg reports. Last week, China’s ambassador to the EU warned the bloc not to interfere in its national security affairs, saying sanctions could fuel a confrontation. Beijing has denied that any personal freedoms have been restricted and has touted the benefits to people living in the region.

The U.K. government faces the fallout from riots in the city of Bristol over opposition to a police and crime bill. Meanwhile, the Bank for International Settlements begins a three-day summit featuring top central bankers including the U.S. Federal Reserve's Jerome Powell and the European Central Bank's Christine Lagarde. Elsewhere, we'll get an earnings update from B&Q D.I.Y. retailer Kingfisher, and we're also awaiting any potential updates on the progress of takeout delivery firm Deliveroo's initial public offering.

Cash idling on the sidelines is the go-to argument for stock bulls calling for further gains, one they are sure to turn to now that rising yields have dented the widely-held belief that valuations don't matter. In fairness, a comparison of money market trends after the financial crisis and today suggests their sideline claim holds water. More than a decade ago, investors seeking safety pushed money market assets under management to a 2009 peak of $3.9 trillion, before $1.1 trillion found its way back into other securities over the following two years. With the pandemic, assets peaked at $4.8 trillion in May, but have come down by only about $400 billion since, suggesting plenty of cash ready for redeployment. Since money market assets peaked on May 20, the MSCI AC World Index has climbed 35%. Over the same time frame in 2009, the global stocks gauge rose 39% as cash levels retreated, before finishing the two-year period another 14% higher. Investors in money market funds have been plagued by razor-thin returns — the yield on 3-month Treasury bill yields has fallen to just one basis point and its threatening to turn negative. A pullback in T-bill issuance as the Treasury Department draws down its own cash reserves could accelerate this move and push investors to shift more funds into riskier assets. While Bank of America’s latest fund manager survey showed cash levels had edged higher to 4.0% from 3.8% — the first rise since July — investor sentiment was “unambiguously bullish,” according to strategists. 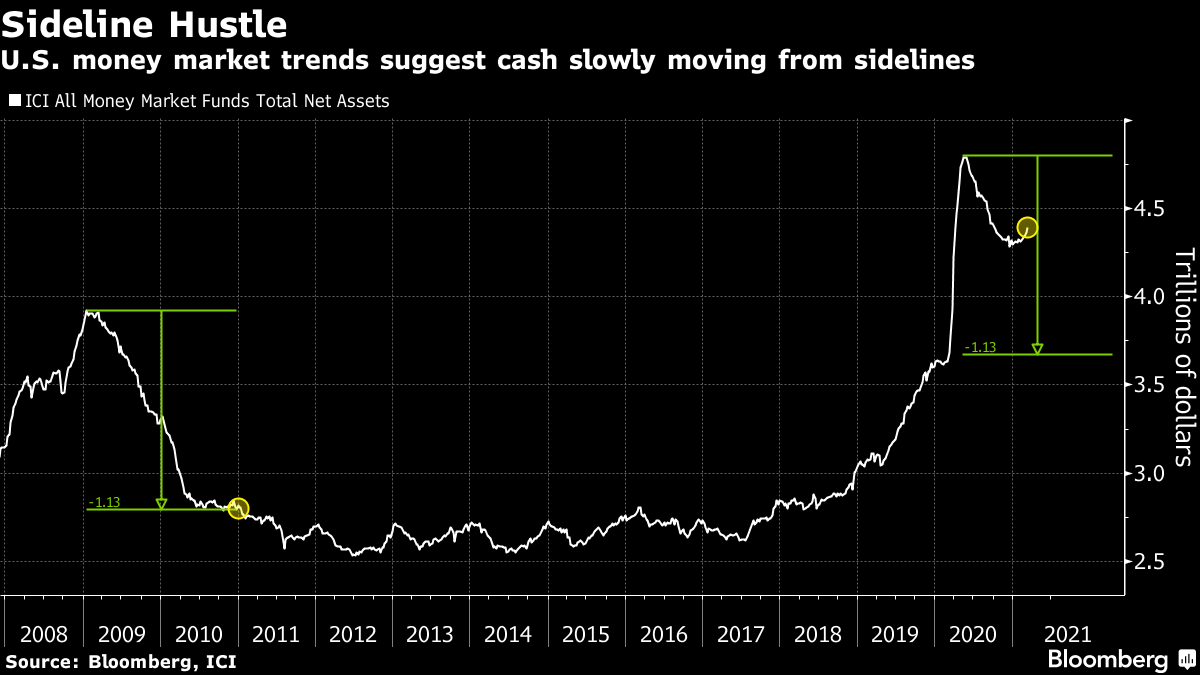 Market On Close Imbalance: $5B to Buy