Brent crude oil extended a decline to about 6% Tuesday amid fresh worries about social restrictions hitting demand in Europe, and also India, the largest consumer of U.S. crude in January. Prices are steady today after briefly trimming the decline as a 400-meter-long container ship became wedged lengthways across the Suez canal — the world’s busiest maritime trade route — causing a pileup of at least 100 vessels. Elsewhere, the 10-year U.S. Treasury yield slid for a second day after Federal Reserve Chair Jerome Powell played down the risks that economic growth would spur unwanted inflation. Government and corporate bonds around the world have been having their worst start to a year since at least 1999. Stock futures are currently lower.

GameStop slumped 15% in after-hours trading in New York on sales miss and as investors' hopes of guidance on a significant new strategy proved to be in vain. The company declined to take questions on a call with investors, though it has appointed new executives with tech experience as part of a push by an activist investor to make the brick-and-mortar chain an e-commerce power. The shares are still up about 860% year-to-date following the earlier surge fueled by Reddit users who targeted heavily-shorted stocks in an attempt to inflict losses on hedge funds, with the episode credited for inspiring a new cohort of retail traders.

AstraZeneca says it will release up-to-date results from the final stage trial of its vaccine, responding to criticism from a U.S. science agency. Meanwhile, the European Union is only prepared to let the U.K. take a small portion of Astra’s output from the Netherlands, and is set to announce tougher rules on vaccine exports. Elsewhere, rival drugmaker Pfizer has begun testing on humans a new pill to treat the coronavirus that could be used at the first sign of illness. This all comes as the World Health Organization warns of “truly worrying trends” in infections as societies are opened up without vaccines being rolled out evenly. British Prime Minister Boris Johnson says he aims to announce plans on the resumption of international flights by April 5.

President Emmanuel Macron expressed concern that Turkey will attempt to influence upcoming French elections. While he didn’t explain how Turkey might attempt to interfere – or whether he was referring to regional elections in June, the presidential ballot in 2022 — it was likely a reference to its hold over parts of the Turkish diaspora via schools, mosques and other organizations. Ties between Macron and Turkish President Recep Tayyip Erdogan have been tense over issues ranging from religion to energy exploration in the eastern Mediterranean. Elsewhere, neither Israeli Prime Minister Benjamin Netanyahu nor his opponents were able to chart a secure path to forming a coalition government after Tuesday's election. Failure to do so could tip the nation toward another vote.

It's day two of Powell and Treasury Secretary Janet Yellen in congress, and we'll also get purchasing managers index data in this region, in addition to U.K. inflation. Utility E.On is on a light earnings schedule. Elsewhere, Amazon has said it will trim its Deliveroo stake following the takeout delivery firm's initial public offering. BP had its debt rating lowered by Moody’s for the first time in five years. In the U.S., Intel unveiled an ambitious bid to regain its chip-manufacturing manufacturing lead, with shares of Asia peers Taiwan Semiconductor Manufacturing and Samsung Electronics slipping.

Calls last week that the 40-year bull market in Treasuries is finally over make for nice headlines but are probably a little premature. Yes a Bloomberg gauge tracking bonds maturing in 10 years or longer had fallen more than 20%, but the idea that this defines a bear market holds little weight beyond being a sometimes useful rule of thumb for journalists. In reality, it's more a case of “you'll know it when you see it'' and with benchmark yields at 1.60% and most auctions going smoothly, I think it's fair to say you haven't seen it yet. A quick look at the very long-term downtrend in 10-year yields shows that it is nowhere near under threat. In fact yields could climb close to 3% and the bull market in bonds could be still be argued intact. Momentum has turned solidly higher for yields, and further gains may be well on the cards, even if this itself has become a worryingly consensus call. But it's too early to throw Treasuries on the scrap heap and declare an end to a four-decade trend. 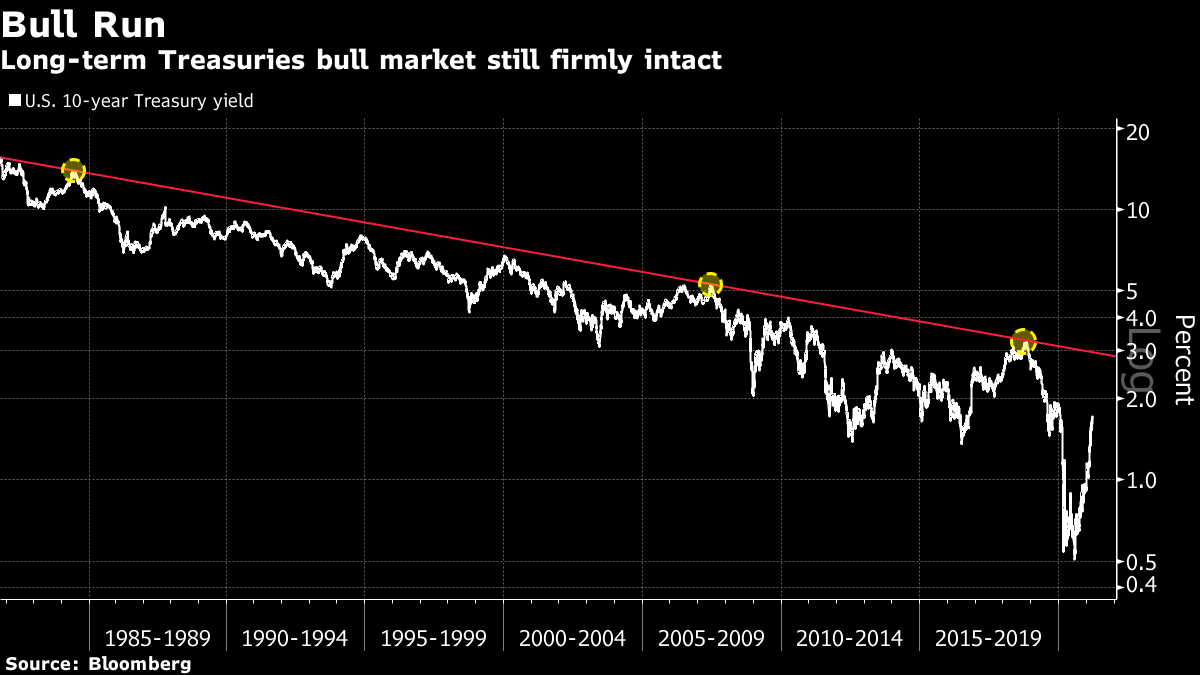 Market On Close Imbalance: $3.6B to Sell

OP: Tech Stocks Back in Style

OP: Tech Stocks Back in Style