The U.K. and European Union attempted to ease vaccine nationalism concerns by pledging in a joint statement to find a "win-win" situation on supply, just as questions were being asked about the discovery by police of 29 million AstraZeneca doses at a factory in Italy. Elsewhere, India has placed a temporary hold on all exports of the Astra vaccine due to an expected increase in domestic demand, the BBC reports. Meanwhile, Astra reported a slightly lower efficacy rate for the shot after the results of an American clinical trial were criticized. In restrictions news, the U.K. warned that it may need tougher border measures to prevent the arrival of virus variants, while Prime Minister Boris Johnson also suggested people may have to provide proof of vaccination to visit a pub. Meanwhile, Italy hopes to ease its lockdown after Easter, while German Chancellor Angela Merkel dropped plans for a five-day strict shutdown. "This mistake is solely and alone my mistake," the leader said in a rare apology.

The world's most exciting traffic jam continues as tug boats and diggers fail to dislodge a massive container ship stuck in the Suez Canal. The 200,000-ton Ever Given has been blocking what is arguably the world’s most important waterway since Tuesday morning. An elite salvage squad is due to arrive later, but the best chance for freeing the ship may not come until Sunday or Monday, when the tide will reach a peak, according to one expert. A rough calculation shows there’s about $9.6 billion of daily marine traffic halted, with the route handling about 10% of seaborne trade, spanning everything from finished goods to oil, gas and other commodities. On Wednesday, 185 vessels were waiting to cross the canal, according to shipping data compiled by Bloomberg. The episode has shone a light on one Dutch firm that makes a living out of such situations.

North Korea fired two ballistic missiles on Thursday in breach of United Nations resolutions, according to Japan. “These missile launches, the first in roughly a year, pose a threat to the peace and security of our country and the region,” Japan said. South Korea, meanwhile, added that they were likely short-range ballistic missiles that landed in waters between the Korean Peninsula and Japan. North Korea's Kim Jong Un is probably testing how U.S. President Joe Biden will react, part of a longstanding tactic of feeling out new U.S. presidents. Biden's predecessor Donald Trump mostly dismissed the significance of the launches, focusing instead on the benefits of his personal dealings with Kim. Here's all you need to know on North Korea-U.S. relations.

Bitcoin fell for a fifth day against the dollar, its longest losing run since December. Earlier predictions that U.S. government stimulus will be spent on cryptocurrencies are fading, and derivatives expiries are adding to volatility. Bitcoin is down about 15% from its record high, but remains 700% higher over the past year. In traditional assets, European stock futures are slipping after technology led decline in New York, with lockdown favorites like Zoom and Peloton slumping and stocks tied to the expected reopening of the U.S. economy faring better. Federal Reserve Chair Jerome Powell, meanwhile, said the central bank’s muted forecast for lower unemployment this year was actually disguising “highly desirable” labor market gains. Oil is down despite the Suez blockage amid a focus on mounting stockpiles, but Brent crude remains up more than 20% this year.

The fact that semiconductor stocks are struggling for traction amid an ever growing global shortage of computer chips is a good a signal as any that investors have begun to reevaluate how much positive news is priced in to risk assets. A combination of soaring demand for stay-at-home electronics, a sharp rebound in orders from car companies and weather-related disruptions has led to booming business for the highly concentrated chip industry. Yet the Philadelphia Semiconductor Index is down 9% since its mid-February high. I flagged the gauge as looking overextended in late January, and since then it has formed what could well become a bearish head-and-shoulders pattern, pointing the way to further downside. Often seen as a leading indicator for the broader market, the SOX is trading on 21 times forward earnings, broadly in line with the S&P 500, but well above its 10-year average of 15 times. It's still in an uptrend and has risen a whopping 120% from last March's low. But if investors have decided that enough is in the price for now, there are plenty of stocks and some sectors with even higher valuations, that don't have half the tailwinds the chip industry has. 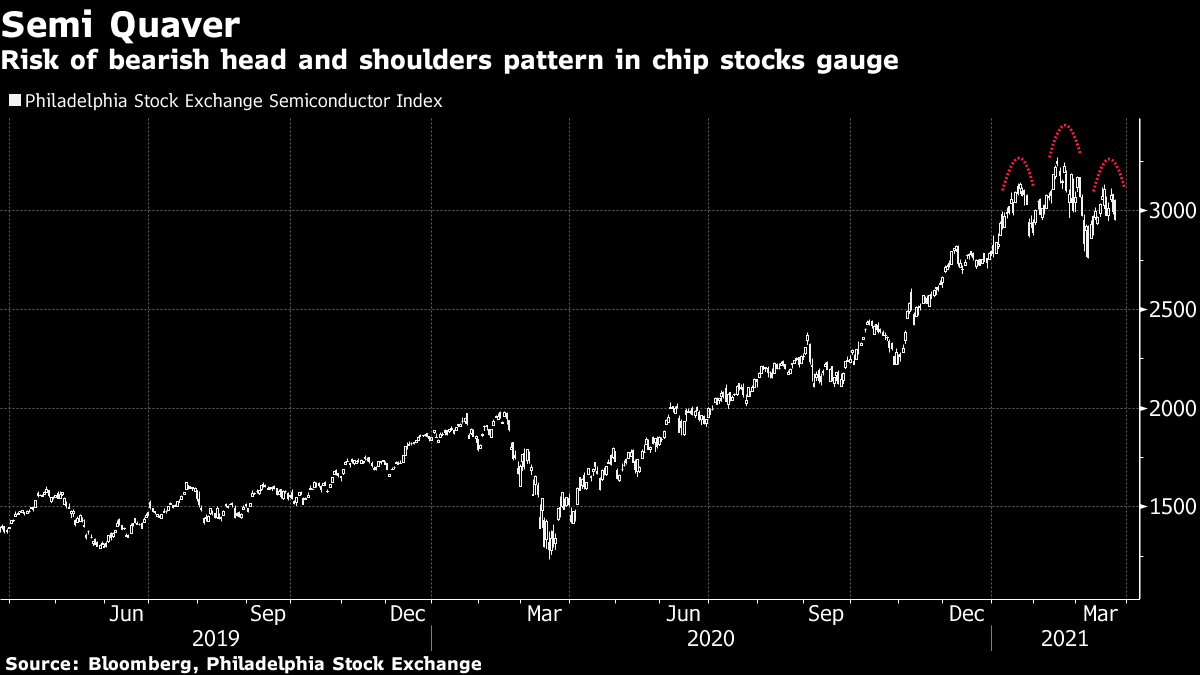