AstraZeneca must meet its commitments for supplying vaccines to the European Union before it will be allowed to export any doses, according to European Commission President Ursula von der Leyen. Figures presented by von der Leyen showed the EU has exported more vaccine shots since December than it has administered. Italian Prime Minister Mario Draghi urged EU nations to take action against pharma companies responsible for delays, Bloomberg reports. Elsewhere, Angela Merkel signaled that Germany would declare France a high-incidence virus area, requiring a negative test for anyone entering from the country. The chancellor's week to forget on the pandemic comes just as her nation has one eye on an election in late September. Meanwhile, the U.K.'s plan to ease its lockdown was backed by parliament, and a Conservative MP has vowed to walk around London with a pint of milk as an apparent symbol of freedom.

Joe Biden's first news conference since entering the White House touched on issues including China, whom he promised to outspend on innovation and infrastructure but declined to say whether he would keep tariffs in place on the majority of Chinese imports. The U.S. president also said he's open to diplomacy with North Korea, but warned that recent missile tests could prompt a response. On the pandemic, Biden set a goal of administering 200 million vaccine doses by the end of April, doubling his target for his first 100 days in office, just as U.S. infections are rising again. The 78-year-old also said he plans to run for re-election in 2024, and joked that he misses his predecessor, Donald Trump.

The massive container ship stuck in the Suez Canal is showing no signs of budging and forcing other carriers and vessels to consider epic voyages around Africa. Two liquefied natural gas tankers bound for Asian markets appear to have changed course in the mid-Atlantic, while shipping giants A.P. Moller-Maersk and Hapag-Lloyd are considering sending vessels along the same route. Machinery producer Caterpillar is facing shipment delays and the blockage is also curbing shipments of robusta coffee — the type used to make Nescafe. Shipping rates remain elevated having soared due to pandemic disruption. Finally, here's what the Ever Given's troubles mean for oil markets.

European stock futures are higher Friday, with shares in the region pretty much unchanged over the past four days and still sitting below pre-pandemic highs. Airline stocks have had a volatile week on continuous speculation over international travel restrictions, and now one report warns that another lost summer would likely trigger a spate of airline failures and bankruptcy filings. U.S. banks are also a focus after the Federal Reserve said large lenders that clear the next round of stress tests with sufficient capital will be allowed to resume dividend increases at the end of June. Overnight, China's central bank predicted a potential economic growth rate of 6%. Asian stocks gained.

U.K. retail sales are expected to have edged up on a month-by-month basis in February, and we'll also get an update on Germany's Ifo business climate survey. Meanwhile, Credit Suisse is examining the role of board members including its chief executive as part of its probe into dealings with failed lender Greensill, Bloomberg reports. Separately, Deutsche Bank's CEO is set to relinquish his role overseeing the lender’s investment banking unit. Elsewhere, soccer's Club Brugge shelved its initial public offering and U.S. social media stocks are in focus after Thursday's hearing in congress where Twitter's Jack Dorsey said he takes some responsibility for online organizing that led to January's Capitol riot. Finally, some of us will lose an hour's sleep after the clocks change this weekend.

An army of bullish technical indicators is assembling to put King Dollar back on the throne. In the accompanying chart I've shown four of them, starting with the Bloomberg Dollar Spot Index's clear breakout of its year-long downtrend from last March. That led to the establishment of a slightly longer-term double bottom pattern — a positive signal — stemming from the gauge's lows in 2018. The greenback's strength this year hasn't been in a straight line, leading to the formation of another bullish pattern called a cup and handle, which points the way to further upside. And finally, the 50-day moving average is poised to cross above its 100-day equivalent, a sign of building momentum. For the skeptics among you, I hear you — but remember, you don’t have to believe in technical analysis, you just have to believe that somebody else does. And there is plenty of fundamental support for a stronger dollar, at least in the short-term, with the U.S. economy set to grow at its fastest since 1984, Treasury yields pushing higher and American vaccinations accelerating. Short positions against the greenback have been slashed — they stand at about $10 billion on aggregate — down from over $30 billion in January, so a violent squeeze is less likely. But the stars are aligning for another push higher in the dollar, and that would have a knock on effect across many asset classes. 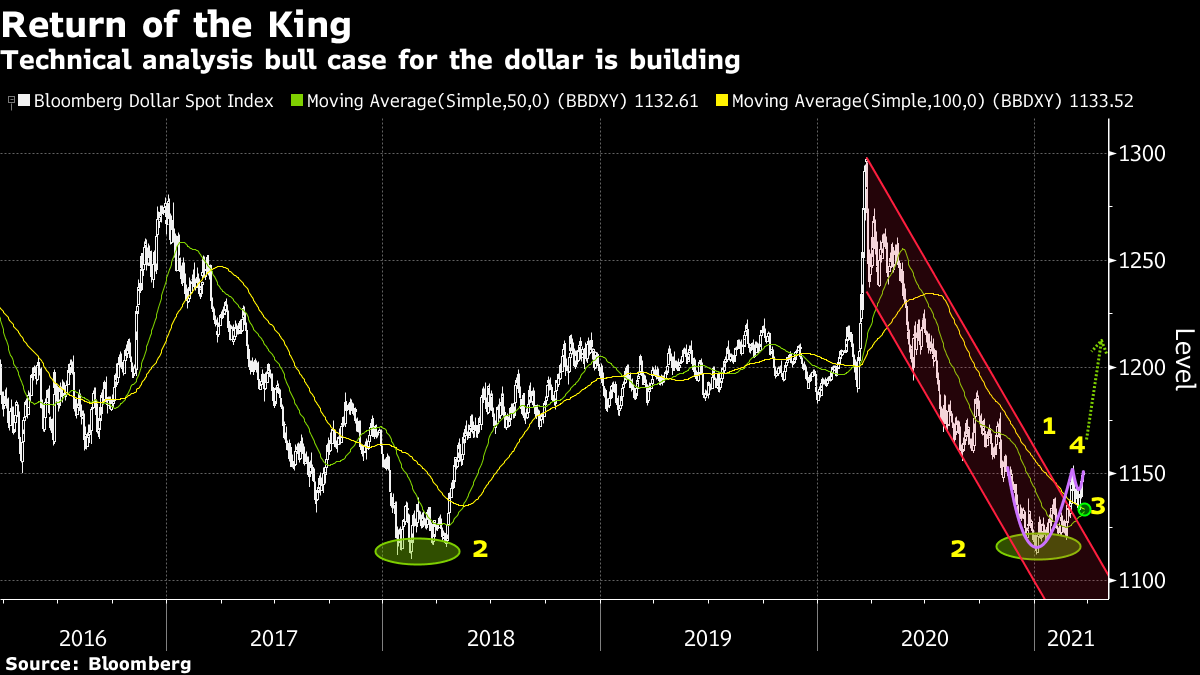