Good morning. The Ever Given is floating, China's cotton stand-off escalates and a hotly anticipated market open lies ahead. Here’s what’s moving markets.

After nearly a week wedged sideways across the Suez Canal and choking global trade, container ship Ever Given was partially refloated this morning. Crude oil futures fell on the news, though here was no immediate clarity on the crucial question of when traffic in the canal will restart. The ship has a damaged hull but appears to be stable after the overnight push to free it during high tide. Once the vessel has been cleared, authorities will work to allow traffic to resume through the canal that’s a conduit for about 12% of world trade. At last count, 450 ships were stuck, waiting or headed to the waterway. Others have diverted to the longer route around the southern tip of Africa.

H&M stores in some parts of China are being closed by their landlords, threatening to disrupt the clothing giant’s growth in its fourth-biggest market as Beijing’s growing sensitivity toward criticism of the human-rights situation in Xinjiang ensnares Western companies. The tussle is part of a greater quarrel over alleged human-rights abuses in China, which announced retaliatory sanctions on individuals in the U.S. and Canada as the corporate fallout spread. Japanese brands Muji and Uniqlo became embroiled in the spat at the end of last week, while Oregon-based Nike’s shares sank as investors took fright at the potential impact on its Chinese business.

Global traders are bracing for what’s shaping up to be one of the most anticipated opens for U.S. equities in months following an extraordinary $20 billion wave of block trades Friday that rattled investors worldwide. The mystery seller was the family office of former Tiger Management trader Bill Hwang, at the center of a margin call from large banks including Goldman Sachs, people familiar with the matter said. Early this morning, Japan's Nomura said it's facing a “significant” potential loss from an unnamed U.S. client, sending its shares down 16% amid reports that the losses are related to Hwang's Archegos Capital Management.

England enters the next stage of its reopening today, with the “stay at home” order lifted and replaced with a “stay local” message. Residents can meet with up to six people or two households outdoors, after daily new infections hit their lowest level since last autumn over the weekend. Lagging behind Britain in vaccinating its population, the European Union said it will block exports of AstraZeneca's coronavirus vaccines if the company fails to deliver the doses bought by the region on time. Ties between the pharma giant and the EU have been under additional strain since last week's discovery of 29 million vaccine doses set for export out of Italy.

European stock futures are broadly neutral and no major earnings are expected in Europe today. Starting today, French bank Natixis is on trial over accusations it misled investors over its exposure to the subprime mortgage crisis over a decade ago. Later, Fed Governor Christopher Waller will speak at a virtual discussion hosted by the Peterson Institute for International Economics, his first public speech since joining the board. And with the Ever Given having been partially refloated in the Suez Canal, attention turns to when the waterway can reopen to traffic.

Fast money currency traders have pulled back from betting against the dollar and are turning their attention to a new target, the yen. Leveraged fund net short positions in the Japanese currency have hit their biggest in more than two years, according to the latest Commodity Futures Trading Commission data. The yen is caught between a resurgent greenback, benefiting from higher Treasury yields and an accelerating U.S. recovery, and risk-on sentiment damping demand for haven assets. It has fallen almost 6% against its U.S. peer so far this year, and the dollar-yen touched 109.85 on Friday, matching its highest since June. That has put the closely-watched 110 level firmly in play, not only a key psychological round number but also where a cluster of technical resistance lies from the dollar-yen’s four-year downtrend. Momentum gauges are looking stretched, so the resistance may hold, but should a break out be confirmed there are likely further gains ahead for the pair. 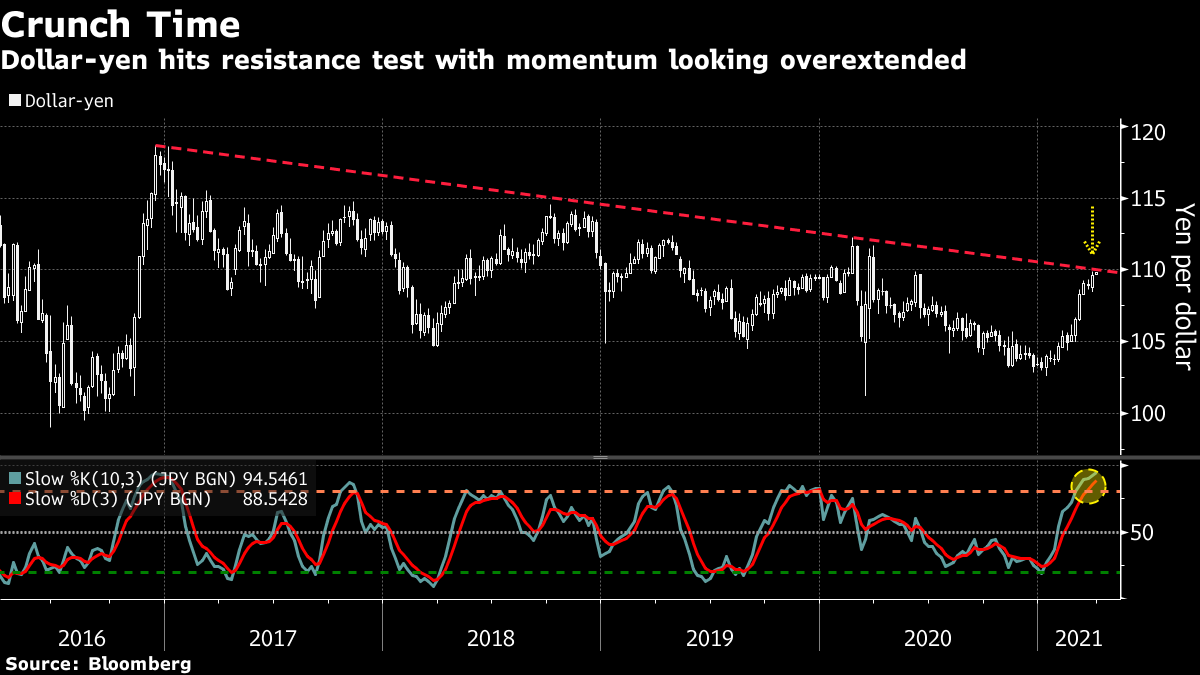 SpyGate : Program Trades Pushing the Tape at the Close

Protected: OP: Why Did the S&P Rally So Much on Friday?

OP: Why Did the S&P Rally So Much on Friday?