Deliveroo starts trading in London today, after the food delivery platform's turbulent IPO priced at 390 pence, the bottom end of its original range. This will value the company at 7.6 billion pounds, compared to 11.5 billion euros for Dutch rival Just Eat Takeaway and 27 billion euros for Germany's Delivery Hero. Deliveroo's IPO was hobbled by criticism of its work model, with some couriers complaining that they're making less than minimum wage on the app. Three of Britain's biggest asset managers — Aviva, Legal & General and Standard Life Aberdeen — said they'd stay away, citing concerns that included its treatment of riders. Hundreds of them are expected to go on strike as the shares start trading this morning.

In a major about-face, Germany will halt the use of AstraZeneca's Covid vaccine for people younger than 60 today, just two months after recommending it only for younger cohorts, and later expanding it to all age groups. Germany’s move follows a report from the country’s vaccine agency of a rare brain blood clot in 31 people, nine of whom died. With the exception of two people, all of the cases were women between the ages of 20 and 63. The development is a fresh blow for Astra’s vaccine – and another threat to Europe’s inoculation campaign, which has already experienced delays, controversy and political battles.

U.S. President Joe Biden will unveil his vision for a mass ramp-up in U.S. infrastructure spending in Pittsburgh today. Brian Deese, one of Biden’s top economic aides, told senior congressional Democrats on Tuesday that the infrastructure package would amount to about $2 trillion over eight years, according to a person familiar with the discussion. That would be paid for over a 15-year period with a bump in the corporate tax to 28% from 21% and the introduction of a minimum tax on global corporate earnings, another person said.

Banks roiled by the Archegos Capital fallout may see total losses in the range of $5 billion to $10 billion, according to JPMorgan. Losses from trades unwinding related to Archegos will be “very material” in relation to lending exposure, the analysts wrote in a note on Tuesday. They added that Nomura’s indication of potentially losing $2 billion and press speculation of a $3 billion to $4 billion loss at Credit Suisse is “not an unlikely outcome.” Analysts and investors are trying to figure out the final losses to banks exposed to the Archegos implosion, with the task made harder by the opaque nature of the leveraged trading involved.

European stock futures are heading slightly lower, following a dip in Asian stocks as bond yields rose. The morning’s earnings highlight is H&M’s first-quarter update, where current trading will be in focus amid pandemic-related store closures and a Chinese boycott over the Swedish firm’s stance on human rights. U.K. house prices are also due, with economists expecting a slight slow-down during March. Later today, tech investors will be watching Micron’s revenue forecasts as the U.S. memory chipmaker releases earnings.

Critics denouncing Cathie Wood's Ark Investment Management for having too much cash tied up in too few stocks are kind of missing the point of thematic investing. It's the responsibility of the ETF buyer to have a diversified portfolio, not the fund manager whose mandate is to concentrate exposure toward a specific theme or sector. Ark — which invests in companies involved with disruptive trends — recently altered the prospectuses for its funds to remove clauses limiting its concentration risks, generating fresh criticism in the process. The move comes with its flagship Ark Innovation ETF down over 25% from a February high and potentially signals the high-profile fund manager is looking to use the recent selloff in growth stocks to double down on some holdings. And that is exactly what Wood is being paid for. She would be doing a disservice to her investors to load up instead on cash or Treasuries or a bunch of not-so-innovative stocks in a bid to diversify. This is by no means an endorsement — any concentrated investment is by definition a high-risk one — and the merits of the funds themselves are a separate issue. But like the woodstain advertisements of old, when you buy a robotics or a fintech or a space exploration or an innovation ETF, you should be getting exactly what it says on the tin. 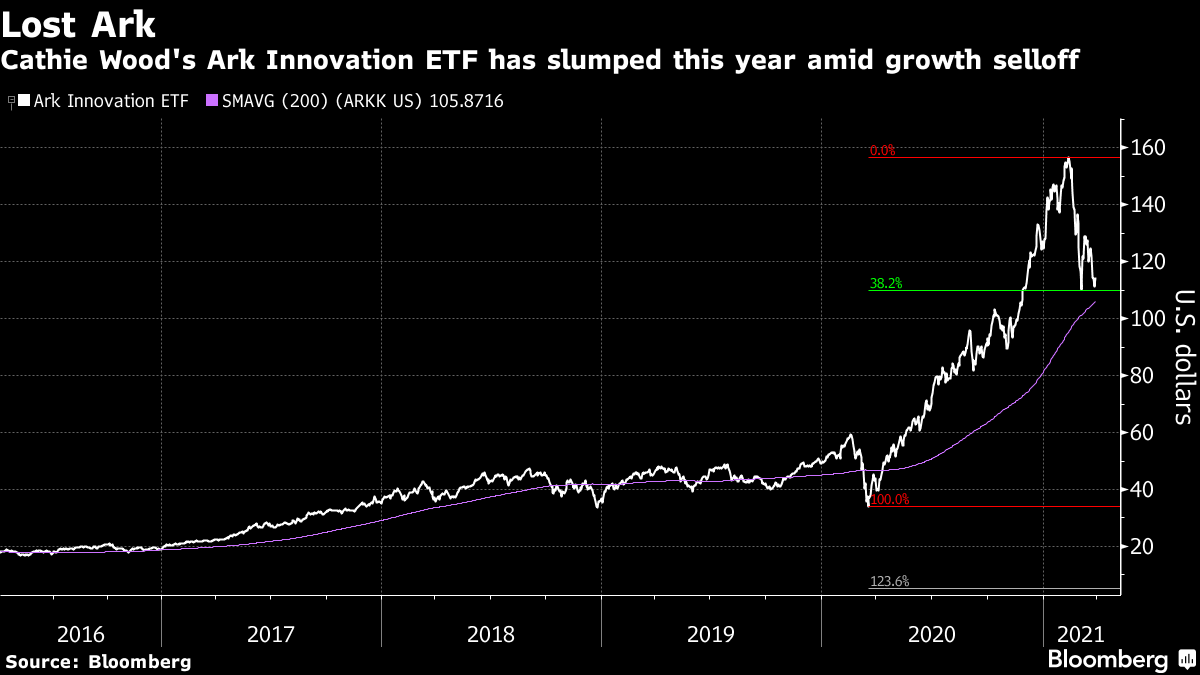 An earlier version of Tuesday's Five Things newsletter corrected the spelling of Archegos in the first paragraph.

Market On Close Imbalance: $2.4B to Sell – Rinse, Repeat