French President Emmanuel Macron announced a new four-week national lockdown, shutting down schools and businesses as the country seeks to contain a third wave of Covid-19 cases. Travel in between regions will be restricted, further impacting companies that hoped to benefit from school holidays in coming weeks. Macron said he aims to reopen the economy in stages starting in mid May. Stocks of French retailers, caterers, and businesses in the hospitality sector could be active at the open. Meanwhile Hungary, boasting the second-fastest vaccination progress in the EU after clearing Russian and Chinese vaccines ahead of its neighbors, is preparing to ease lockdowns soon. The move is controversial as the country reported record daily deaths yesterday.

In today's meeting, OPEC and its allies including Russia are expected to keep oil output curbs in place for at least another month. Still there's room for surprises, two anonymous delegates told Bloomberg, including a possibility that a production hike will be considered. Crude oil futures have retreated from highs reached in early March, as resurgent virus cases in major economies cast doubt on a quick recovery for demand.  At the same time, a strengthening dollar has weighed on commodities priced in the currency, while the week-long blockage of the Suez Canal didn't meaningfully restrict oil supplies. Brent futures slumped yesterday after an OPEC+ panel meeting ended without a policy recommendation, leaving all options on the table today.

A manufacturing error at a plant involved in Covid-19 vaccine production affected 15 million doses worth of an ingredient for Johnson & Johnson’s vaccine, according to two people familiar with the matter, though the company downplayed the situation and said it met its most recent vaccine delivery target. The issue, which occurred recently at an Emergent BioSolutions Inc. facility in Baltimore, isn’t expected to change President Joe Biden’s expectation that the U.S. will have enough vaccine for all adults in May, the people said. In a statement, J&J said a batch of drug substance failed its quality test.

Deutsche Bank sold about $4 billion of holdings seized in the implosion of Archegos Capital Management in a private deal last Friday, helping it emerge unscathed from a scramble that may cost some rivals billions of dollars. The German bank executed the direct sale after Archegos defaulted on margin loans used to build up highly leveraged bets on stocks, people with knowledge of the matter said. At the time, other lenders had already started selling and the pressure was on Deutsche Bank to rid itself of the exposure or potentially get stuck with losses. One of the buyers was Marshall Wace, among Europe’s largest hedge fund managers, according to a person familiar.

It’s a quiet earnings morning ahead of the long Easter weekend. French caterer Sodexo just reported sales in line with estimates. British fashion retailer Next is up next, and analysts will be focusing on current trading as well as on details about its online marketplace expansion. Watch semiconductor stocks at the open after big news from chipmakers boosted stocks in Asian hours, with TSMC announcing an audacious $100 billion in capex and reports emerging that Micron and Western Digital were each exploring potential $30 billion deals for Japanese memory maker Kioxia. U.S. jobless claims are due in the afternoon. Today is also April Fool’s Day, so watch out for fishy-sounding announcements — like Volkswagen showed this week, not all fake releases are even funny.

Arguably the key underlying investment theme so far this year is divergence. Having fallen together as one in 2020, economies are growing again at varying speeds, thanks in part to differing stimulus measures and vaccine rollouts. U.S. yields are diverging from their European and Japanese peers, driving different moves in their currencies and bond markets. And it's no different in the global equity market, where stocks and sectors are moving ever less in tandem. A gauge of the MSCI AC World Index's 60-day pairwise sector correlations — a measure of how closely sectors move relative to each other — has fallen back to the 0.50 level, well below its 10-year average. A maximum possible correlation of 1.0 would signify all sectors are moving in lockstep. The theme is going to give asset allocators a chance to earn their stripes this year; it's a great opportunity for active fund managers to outperform their benchmarks. But it could also mean a period of muted returns for those invested in passive funds, where the winning and losing sectors battle under the surface. 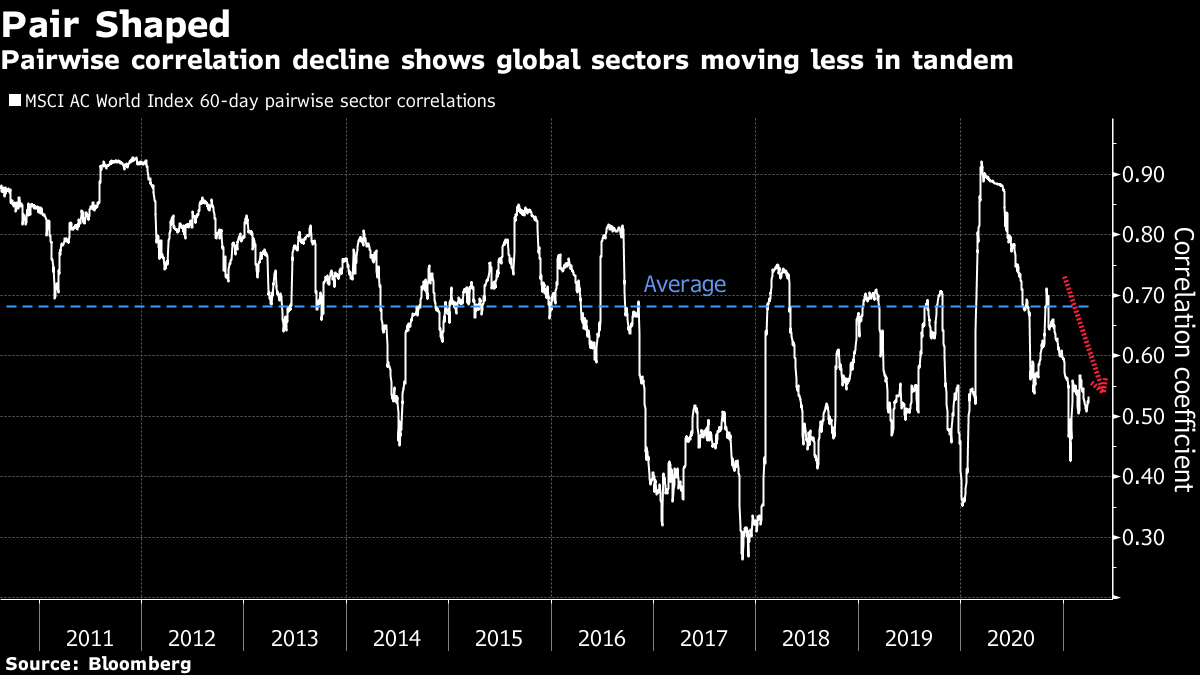 Europe's Five Things newsletter will not be running during the Easter Break. It will resume on Tuesday, April 6.

Market On Close Imbalance: $5.4B to Sell – End of the Quarter Profit Taking