Economic rebound, Biden's plan, and mixed fortunes on the pandemic.

With much of the market closed on Friday, investors will get their chance to react to the blow-out payrolls number this morning. Friday's report showed the jump in hiring had a broad base across industries, with leisure and hospitality leading gains. Those numbers were reflected in survey data which showed a record share of small-business owners reported job openings in March. The rapid pace of vaccines is helping with the recovery, with the 7-day average of daily shots given in the U.S. passing 3 million.

Meet the three new members of the Invesco QQQ family.

The Biden administration is trying to build public support for the President's $2.25 trillion infrastructure plan, targeting Republican voters in an attempt to counter opposition from GOP lawmakers. While Sunday's news shows indicated there may be some support among Republican leaders for a much smaller spending package, the issue of increased taxes remains the main sticking point.

President Joe Biden called on Americans to get vaccinated as a member of his Covid-19 advisory board warned that the U.S. is facing a fourth surge of infections. Illness and hospitalizations are increasing in individuals between 30 to 50 years of age. India hit a record of more than 100,000 new cases in 24 hours, leading to further restrictions. France has entered a four-week lockdown, while the U.K. government is pushing for everyone in England to take two Covid tests a week as authorities look to further open the economy next Monday.

Global equities are generally quiet with much of the world on holiday today. Shares in India slumped the most in five weeks after the Covid case data was released. Japan's Topix index closed 0.5% higher. Markets in China, Hong Kong and most of Europe were closed. S&P 500 futures pointed to a jump at the open, the 10-year Treasury yield was at 1.72%, oil dropped and gold was lower.

U.S. services and composite purchasing managers index data for March is published at 9:45 a.m. Eastern Time. The ISM services index for the month is at 10:00 a.m. Also at that time, factory and durable goods orders for February are released. The International Monetary Fund and World Bank Spring meetings begin and continue through April 11.

Here's what caught our eye over the weekend.

It's time to officially bury Goldbug Macro. You know, the school of thought that's always warning about dollar debasement and inflation as a result of money printing. 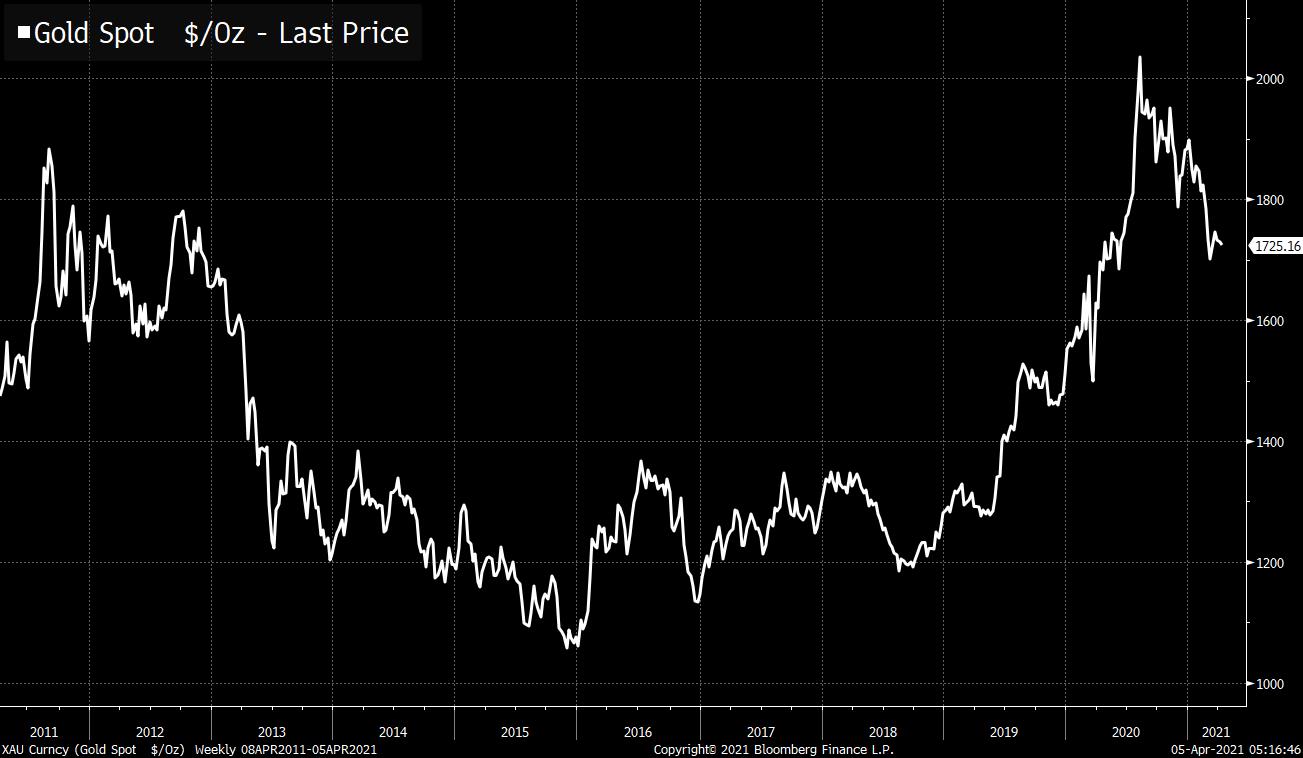 Here is a chart of gold over the last 10 years. It's up about 10%. During this period we've run large deficits the entire time, and in fact over the last year, some of the biggest fiscal stimulus of all time. During this time the size of the Fed's balance sheet rose to nearly $8 trillion from under $3 trillion. Not only has gold performed poorly, the dollar is still dominant.

Not only that, inflation has been mild, contra to what all the Goldbug Macro types would have predicted. Of course, they would probably come back and say that inflation is actually being mis-measured and that it's way higher if only you look at it the right way. Or that it's showing up in asset values or something like that. Even if you were to grant all that as true, gold hasn't benefited, so their case hasn't been helped much. As we saw in the wake of the Great Financial Crisis and over last summer, gold seems to do well during periods of stagnation plus aggressive Fed easing. But that's about it. After two huge crises in just over a decade, plus fiscal and monetary stimulus the likes of which we haven't seen before, we now have enough evidence to bury the economic fantasies of gold's most ardent believers.

Protected: OP: Why the Flow of Money Into the Markets Has Slowed

OP: Why the Flow of Money Into the Markets Has Slowed