The Cboe Volatility Index, also known as the "fear gauge," closed at its lowest level since February 2020 amid calm in stock markets that are trading around record levels. Wall Street was boosted by Federal Reserve Chairman Jerome Powell’s assurance that the central bank can reinvigorate the economy without spurring harmful inflation.The VIX, a measure of expected price swings, ended the day below the key level of 20 for a seventh straight session. That said, one options trader has placed a wager that the index will rise toward 40 in July, amid questions around the pace of the recovery and the impact of a looming tax hike.

The conduct of U.K. Chancellor of the Exchequer Rishi Sunak is in focus after it emerged he "pushed" officials to consider helping Greensill Capital following a request from former Prime Minister David Cameron, a lobbyist for the since-collapsed firm. “I have pushed the team to explore an alternative with the Bank that might work,” Sunak said in a text message, referring to the Bank of England, which administered the government’s Covid Corporate Financing Facility program. Sunak has been touted as a future prime minister.

Italy's Mario Draghi revealed that his government recently blocked a Chinese takeover of an unnamed semiconductor company. The prime minister said he backs an extension of state protection for Italian businesses, after an earlier call for the so-called golden powers rules to be extended to the automotive and steel sectors. Europe has been scrambling to protect prized assets after the pandemic slashed stock market valuations, leaving firms vulnerable to foreign takeovers.

Iran’s chief negotiator at nuclear talks in Vienna said the sides were focusing on removing U.S. sanctions in a single step, in a statement of progress that didn’t specify what Tehran was offering in return. However, in Washington, the State Department declined to respond directly to the Iranian claim but said the White House's position remains that the U.S. will remove sanctions only after Iran returns to compliance with the nuclear deal. Brent crude prices remain about 3% lower for the week, with the focus also on a plan by the OPEC+ suppliers group to increase output.

Riots continued overnight in Northern Ireland amid months of tensions as pro-British loyalists protested against the placing of a border in the Irish Sea. Meanwhile, the U.K. will decide by early next month whether Britons can resume taking international holidays on May 17, with destination countries rated according to their Covid-19 risk in a "traffic light" system. Elsewhere, France revealed it will pledge to keep tax unchanged and will limit annual spending increases as it seeks to repair the fiscal damage from the pandemic. Today, German industrial production numbers will follow Thursday's resilient factory order statistics. Elsewhere, Credit Suisse is tightening the financing terms it gives hedge funds and family offices after the Archegos Capital Management blowup. In the U.S., President Joe Biden announced a set of executive actions to curb fire arm violence.

It’s getting harder and harder to justify the current valuations of U.S. stocks and that’s because of — not in spite of — a turbocharged American economy. While the $4.1 trillion in recent stimulus will inevitably fuel a historic rebound in the economy, the stock market is different. It has discounted the benefits but hasn’t taken into account three side effects that could weigh on the earnings underpinning its record: higher taxes, rising input costs and increased financing expenses. Goldman Sachs calculated last month the taxes planned to fund the stimulus, if fully implemented, could cut earnings by as much as 9% in 2022. Yet so far analysts have been loath to bring down forecasts, with S&P 500 estimates for 2022 sitting at their highest this year. Companies are already seeing higher input costs and March data from IHS Markit suggested pressure on margins is developing. The S&P 500 trades on 20.5 times next year’s earnings, a figure rarely seen since the internet bubble. For those who argue we are in a new age of valuations the average equivalent multiple since 1998 is 15.5 times. That was the year the Fed stepped in to manage LTCM’s collapse, to many the beginning of the central bank backstop era. To arguments there’s no alternative to U.S. stocks – the MSCI World ex-U.S. Index is on just over 15 times next-year’s estimates. On technicals too the rally looks extended — the S&P is more than 2 standard deviations above its 50-day moving average. Yes the U.S. economy is growing at its fastest since 1984 and that should counteract some of the pressures mentioned above. But there’s a strong case to be made that U.S. stocks just don’t look appealing at current levels. 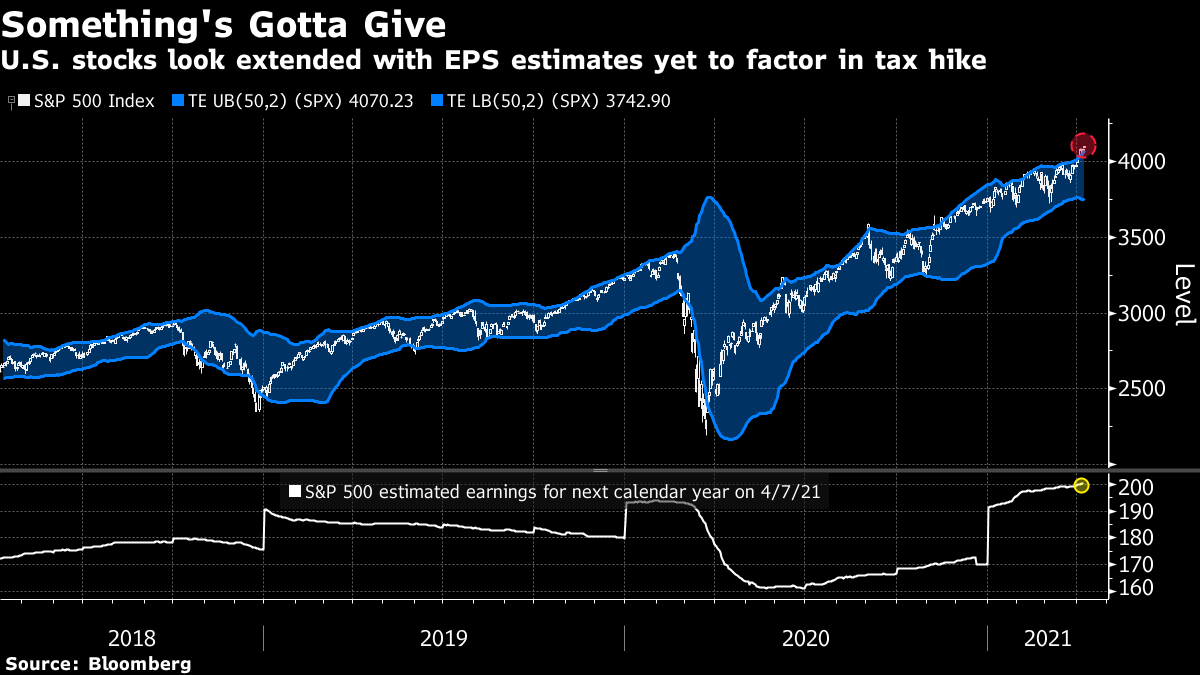