Good morning. The race to replace Angela Merkel heats up, the U.K. enters its next phase of reopening and a summit on the chip shortage takes place. Here’s what’s moving markets.

The race to replace Angela Merkel as the head of the Christian Democratic Union and Christian Social Union's candidate for September's elections will boil down to two candidates. Bavarian leader Markus Soeder has joined the race, setting the stage for a battle with CDU party chairman Armin Laschet for the nomination. The competition could be settled within 48 hours, either amicably or with a contested nomination which would be unusual for the alliance. Merkel herself, meanwhile, has drafted legislation that would take the power to impose Covid-19 restrictions into the hands of the federal government as the country races to ramp up its vaccination program, the pace of which has doubled.

The U.K. takes a significant next step in its reopening on Monday, with non-essential retail and leisure sites to start trading again and pubs and restaurants allowed to serve people outside. The country is also closing in on a key milestone when so-called herd immunity could be reached through nearly three-quarters of the population possessing antibodies against Covid-19. In the U.S., there's growing tension over the spread of vaccination requirements and in the European Union there's a split emerging over the use of the AstraZeneca vaccine between the west and east of the bloc.

U.S. national security and economic advisers will meet with more than a dozen chief executives on Monday to discuss the Biden administration's infrastructure plan and the semiconductor shortage roiling the auto industry. The chip industry is currently facing surging demand and the carmakers have suffered as the companies making semiconductors focus their supplies on consumer sectors like smartphones and televisions. That has meant plants being idled, potentially derailing the auto sector's recovery. Watch for any details on a response, including incentivizing domestic chip production in the U.S. and a review of supply chain vulnerabilities.

The first tentative steps into the next earnings season for European stocks will come this week, with luxury giant LVMH and U.K. grocer Tesco to report, and analysts are racing to boost profit estimates as they bet the pandemic is on the way out. In the U.S., the bottom line may not matter much as valuations are baking in profit levels that won't materialize for a couple of years. There is fierce debate, however, about what the next move for the bond market will be. The reflation trade that dominated the first months of the year has abated for now, and investors will be scouring data this week for signals on price pressures.

European and U.S. stocks are set to track Asian equities lower as the week begins, with shares in China and Hong Kong underperforming. Oil prices are steady, with all assets digesting comments from Federal Reserve Chair Jerome Powell that the U.S. economy is poised for stronger growth, albeit with the threat of Covid-19 still clouding the picture. Europe's earnings calendar is quiet, while the economic agenda is topped by euro-area retail sales and industrial sentiment in France.

It seems there is no cheap way to gain equity exposure to the booming U.S. economy and looking for a back door might even hurt you. A basket of the 38 European stocks with the majority of their sales in North America — including food retailer Ahold Delhaize, advertiser Publicis and medical device manufacturer Smith and Nephew — is already trading at a significant premium to their European peers, according to calculations by Bloomberg. The shares trade on average for almost 20 times next year's earnings versus just 16 times for the Stoxx 600. That valuation is not far off that of the S&P 500 which trades on 20.5 times next year's earnings, well above its own historical average. Unfortunately for European investors, holding the U.S.-exposed basket doesn't guarantee U.S.-equity like performance. Little changed for the year, the portfolio has lagged both the U.S. and European stock benchmarks by over 9% already. 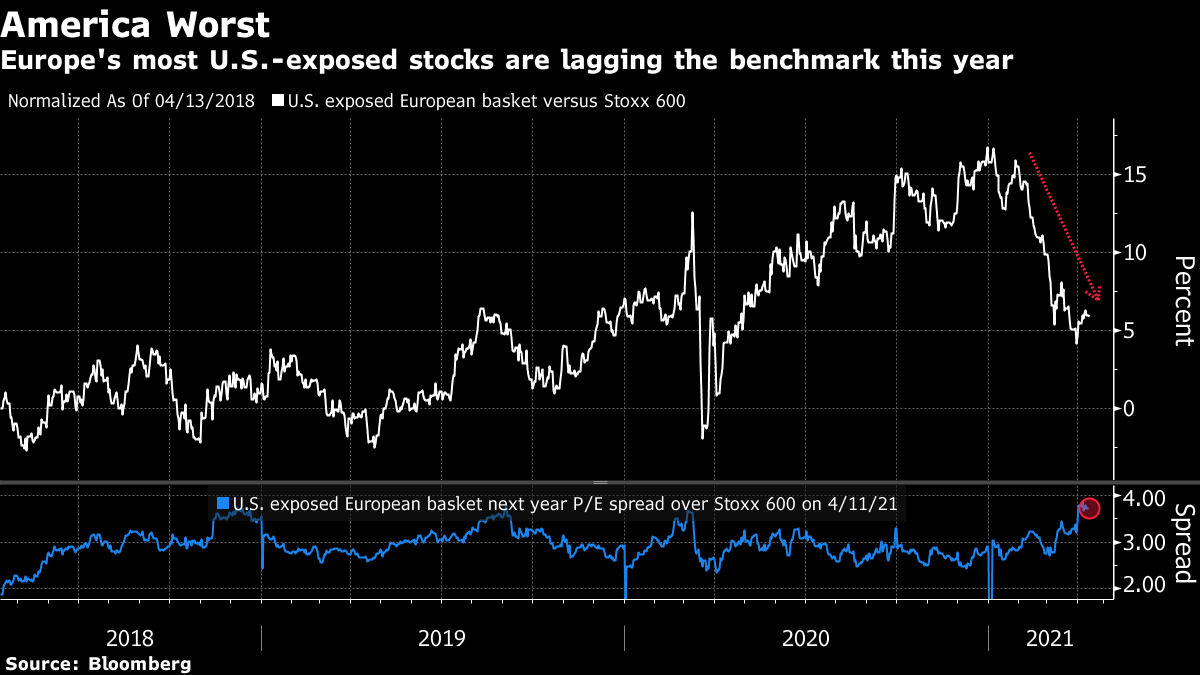