About $2 billion of stocks tied to the Archegos Capital Management blowup were sold by Credit Suisse Group AG in the second such block trade by the lender. The amount of money set aside at the bank for bonuses has been slashed by hundreds of millions of dollars in order to limit the hit to the bottom line from the Archegos implosion. The wider implications for the finance industry are starting to emerge, with both banks and regulators looking at risks involved in lending to hedge funds and family offices.

Nasdaq Inc. set a reference price of $250 a share for Coinbase Global Inc.'s direct listing. It is unlikely that any transactions will occur at that price, with every major direct listing so far opening significantly above its reference price. Bitcoin, the world's largest digital currency, is continuing to move higher ahead of the debut, with the token trading above $64,000 for the first time this morning.

JPMorgan Chase & Co., Goldman Sachs Group Inc. and Wells Fargo & Co. report before the bell this morning after a quarter which has seen the strongest bank stock outperformance since 2010. Investors expect strong results from Goldman and JPMorgan, while looking for updates on regulatory issues from Wells Fargo. Bank of America Corp. and Citigroup Inc. report tomorrow and Morgan Stanley results are out on Friday.

Global equities remain in a low-volatility zone with few major macro drivers able to shake things up. Overnight the MSCI Asia Pacific Index added 0.7% while Japan's Topix index closed 0.3% lower. In Europe the Stoxx 600 Index had gained 0.2% by 5:50 a.m. Eastern Time with tech and mining stocks the best performers. S&P 500 futures pointed to a small rise at the open, the 10-year Treasury yield was at 1.638%, oil was over $61 a barrel and gold slipped.

U.S. March import and export prices are at 8:30 a.m. Crude oil inventories are at 10:30 a.m. It's a big day for monetary policy speakers with both ECB President Christine Lagarde and Fed Chair Jerome Powell speaking later, as well as comments from three regional Fed presidents. The Fed's latest Beige Book is published at 2:00 p.m. As well as the big banks, Bed, Bath & Beyond Inc. and Teladoc Health Inc. are among the companies reporting results.

Here's what caught our eye over the last 24 hours.

The housing market is going wild in the U.S. Prices are soaring all around the country, and the frenzy to buy is so intense that half of the homes on the market are selling within a week, according to Redfin. The obvious answer, it would seem, is to build more homes. However one problem is there's a shortage of lumber, and prices for that are soaring as well. Here's a chart of lumber futures. 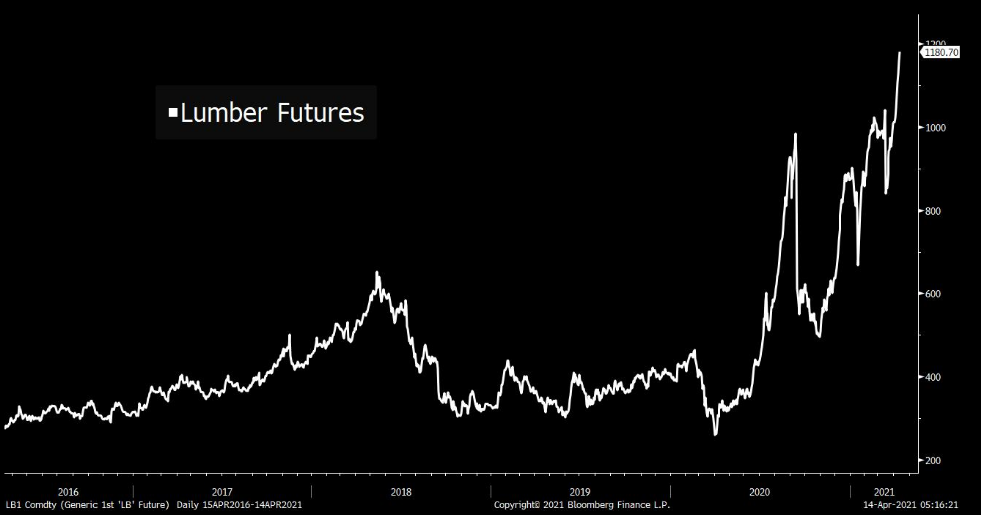 The solution to this constraint is to build even more homes. That may sound counter-intuitive, but when you look at what's going on in the market, it's the clear way forward.

There was a great WSJ article back in February which pointed out that while lumber itself was scarce and expensive, actual timber is cheap and abundant. There's plenty of trees out there for the chopping. The problem is, there's a shortage of sawmill capacity to turn those trees into usable wood. The 2007 housing crash was one driver of a collapse in the number of sawmills.

What's more, the sawmills themselves aren't operating at full capacity. As Bloomberg's Marcy Nicholson reported yesterday, sawmills and lumber yards are facing widespread labor shortages, further impeding their ability to supply the market. One thing that's clear in the reporting is that the sawmills and lumber yards have (understandably) underestimated the strength and durability of the boom over the last year. They didn't see the renovation boom exploding like it did last summer, when so many people were stuck at home. And they didn't expect the housing market to stay on fire like it has through the winter, a period that's typically slow. And so you get this situation where diminished expectations of future demand manifests itself in present tense shortages.

The obvious thing to do is to change those future expectations. Make plans to build a lot more houses for years to come. Keep the demand boom going. That gets the suppliers to build out capacity. You might think that this is only kind of a long-term solution that would do nothing for the acute situation, but that's not obviously right. The easiest way to ramp up sawmill capacity right now would be to solve the labor shortage. And you'll solve the labor shortage with substantially higher wages. Employers will be more comfortable offering big wage increases if they think conditions will stay robust for a long time. There was a great Peter Coy piece a couple of weeks ago about companies of all stripes trying to solve the labor shortage with one-time signing bonuses for new workers. That strategy makes sense if you think the economy is only experiencing a temporary stimulus-fueled sugar high that will revert to slow growth. Companies are understandably reluctant to offer big, permanent wage increases if they think that conditions will "normalize" next year or soon thereafter. So they try the signing bonus route.

To solve the lumber shortage, we need a sustained boom in homebuilding. In the long term, that will encourage more investment in sawmill capacity. And in the short term, that will enable higher wages to get more out of the capacity that already exists. There's an acute shortage of homes right now, but the problem has existed for years. Starter homes have been particularly scarce. Now's a great time to go big and break through all of these unfortunate constraints.