Europe's vaccination program got a boost with Pfizer and BioNTech's move to increase deliveries to the bloc this quarter. The European Union is, however, still exporting more shots than it is administering, highlighting the risk of a backlash against the faltering inoculation push. Still, the bloc's health chief maintained its target of vaccinating 70% of adults by summer and vaccine passports are moving closer, a boon for the battered travel sector. In the U.S., the delay to Johnson & Johnson's vaccine will hit an already slow roll out to minorities and hesitancy to get a shot, though falling, remains a worry.

The cryptocurrency world had a watershed moment on Wednesday with the public listing of Coinbase, the exchange that will provide investors with a new avenue to access the rise of Bitcoin and its ilk. The company's valuation soared over the $100 billion mark, dwarfing that of the exchange operators providing the venue for its listing, before ultimately slipping back and taking the shine off the rally in Bitcoin itself leading up to the listing. The question of which crypto name will be next to market is now bubbling up, even if the Coinbase listing attracted the ire of some crypto zealots.

There will be plenty more company news to chew over on Thursday. Taiwanese chip industry behemoth TSMC will report results amid the shortages and increasing competition in the semiconductor industry. We'll also have the first update from food delivery firm Deliveroo following a rough first couple of weeks as a public company. That follows U.S. banks JPMorgan Chase and Goldman Sachs kicking off the sector's earnings season on Wednesday with big beats in their investment banks, boosted by the meme stock and blank-check company trends.

U.S. President Joe Biden's administration is said to be poised to take action against Russian individuals and entities, including imposing sanctions, as retaliation for alleged misconduct over the SolarWinds hack and efforts to disrupt the U.S. election. That follows a call between Biden and Russian President Vladimir Putin earlier this week, when Biden said the U.S. would "act firmly" to defend its national interests and proposed a summit between the two. It also comes amid a White House push to shore up the U.S. power grid and as U.S. spy chiefs cited Russia and the rise of China among their top concerns.

European and U.S. stock futures were mixed heading into Thursday, following a slight dip in Asia after China’s central bank refrained from adding more liquidity after after a late dip for tech stocks in the U.S. Today, Turkey’s new central bank governor holds his first policy meeting, after his predecessor was ousted after a bigger-than-expected increase in rates. On the economic data front, inflation numbers are due from France, Germany and Italy. Oil prices jumped to the highest in a month on Wednesday and are holding steady, as shrinking crude stockpiles in the U.S. fueled hopes for a recovery in global demand.

Airline stocks have been a go-to coronavirus trade since the pandemic first began as international travel ground to a near-halt. In Europe, a Bloomberg gauge of the region's carriers has been particularly volatile, showing periods of outperformance against global peers, then pullbacks, as the spread of the virus waxed and waned. At the moment, thanks to the surge in cases in Europe, it's in one of its periods of underperformance. While the index is up 7% year-to-date, that lags the 9% gain in the Stoxx 600 and is well behind the 16% jump in Bloomberg's global airlines benchmark. But a statement today from Qantas raising its capacity forecasts should come as welcome news to airline bulls. The carrier said its passenger traffic in Australia has almost completely recovered. Qantas noted "extremely strong" demand for leisure trips and a return of business travel, which is back to about 65% of normal. Forward bookings are "flowing in," according to CEO Alan Joyce. The encouraging update shows the pent-up demand that should soon spread to Europe as vaccinations continue apace. That may well kickstart another period of outperformance for the region's airline stocks. 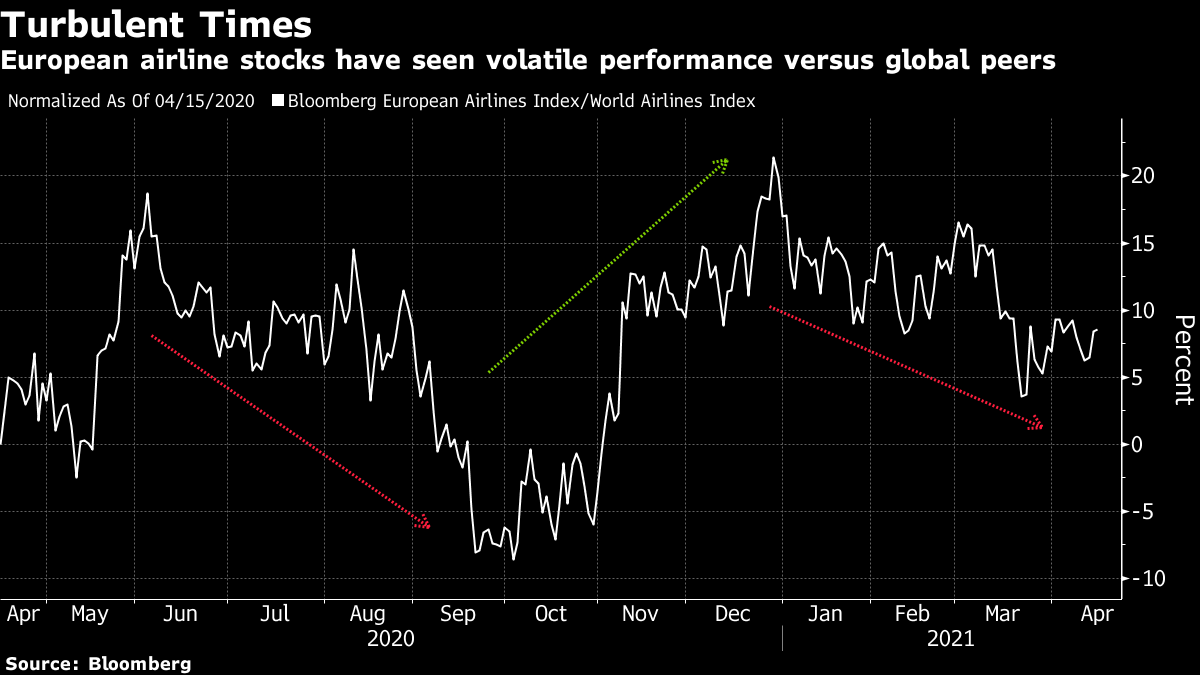