The world's second-largest economy grew by 18.3% in the first quarter, with Chinese retail sales soaring 34.2% in March. While there are large base effects in the number, China's recovery from the coronavirus has been notable, with the economy regaining all its lost ground by the end of September. The housing market is also showing signs of strength with home prices growing at the fastest pace in seven months in March. The IMF warned that the breakdown in U.S. and Chinese technological ties could lead to a 5% drop in GDP for many countries.

There was some concerning news on the uptake of vaccines in the U.S., with data indicating as many as one in three doses are unused in some states. The hold on Johnson & Johnson’s single-shot Covid-19 vaccine could last several more weeks, according to the head of an advisory committee. France became the latest country to record more than 100,000 deaths from the pandemic, with global fatalities approaching 3 million. Epidemiologists are puzzled as to why Covid-19 seems to be much more deadly in Brazil than India.

JPMorgan Chase & Co. sold $13 billion of bonds yesterday, the largest-ever deal by a bank. The sale, in the wake of the bank's best ever quarter, comes amid high demand for debt that provides a premium over Treasuries. Morgan Stanley closes out Wall Street bank earnings before the bell, with analysts expecting strong topline results while looking for clarity on the impact to the firm from the acquisition of E*Trade.

Strong economic data over the past 24 hours has helped global stocks maintain their recent highs. Overnight the MSCI Asia Pacific Index added 0.3%, while Japan's Topix index closed 0.1% higher. In Europe, the Stoxx 600 Index had risen 0.7% by 5:50 a.m. Eastern Time, with every industry sector posting gains. S&P 500 futures pointed to a small move higher at the open, the 10-year Treasury yield was at 1.575%, oil was $63.68 a barrel and gold gained.

U.S. housing starts and building permits data for March is published at 8:30 a.m. The latest University of Michigan sentiment numbers are at 10:00, with this week's Baker Hughes rig count at 1:00 p.m. Dallas Fed President Robert Kaplan speaks twice today including at a Bitcoin conference. Bank of New York Mellon Corp., State Street Corp. and Kansas City Southern are among other companies reporting results.

Here's what caught our eye over the last 24 hours.

The U.S. has just thrown a ton of supply and strong economic data at the bond market and it's had no impact. First it was the U.S. jobs report, then $120 billion of Treasury auctions, followed by consumer price inflation, and now retail sales. The 10-year yield slid to a one-month low.

We are in Terminator 2 territory now, where the rewired-good-guy-Arnold Schwarzenegger's bullets make silvery craters in the natty-but-somewhat-intense robot policeman… But the holes close up, and he's after them again with that odd choppy-handed sprint.

Just as that cyborg's days are numbered (at least in this installment of the franchise) — we have reason to suspect the trend of falling yields hasn't far to go. We're going to go out on a limb here and say this bond market reaction isn't macro-driven. That's not for lack of theories, given the crush of analysts' notes today ("It's one of those days where anyone who has a strong opinion is back-fitting pretty hard," was one of the wrier observations.)

First, the data are strong. Second, Treasuries aren't rallying because of a dovish Fed (no fresh cues there), and that's clear from the lack of increase in market-implied inflation expectations — see the rock-steady state of breakevens in the chart below.

Third, it doesn't look like safe-haven trades in response to virus spikes or vaccine setbacks, or the Russian sanctions (for a particularly long bow).  All three major U.S. equity benchmarks closed at record highs Thursday. 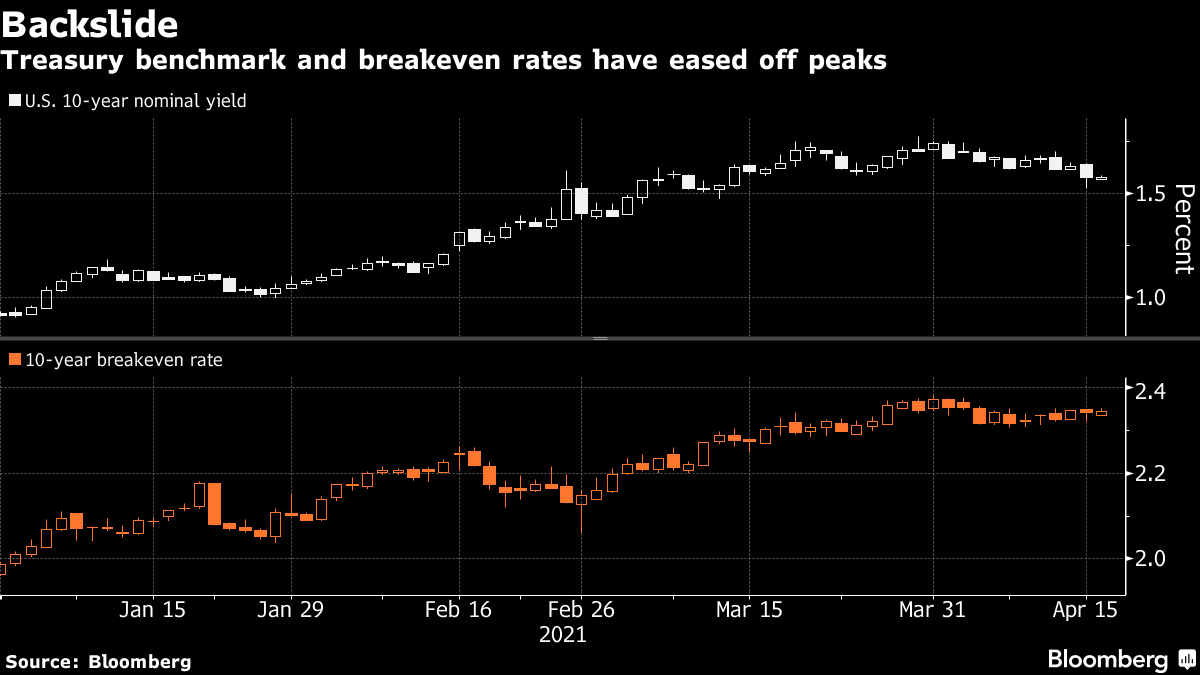 The unwind: This one says investors were motivated to take profits on short positions and curve steepening trades after some sharp moves since the start of the year. "Accounts who delayed buying during the 1Q reflation rout may be finally catching up with those duration needs now that rates have clearly stabilized and looking to remain range bound in the near term," wrote NatWest Markets strategist Blake Gwinn.

Add to this theory the possibility of increased demand from dealers, who were left with a smaller than usual share of the latest successful Treasury auctions, given healthy takeup among institutional buyers.

Hungry pension funds. Gwinn also attributes the rally to recent searing appetite among these institutions for long-dated debt. This is reflected in the surge in demand for stripped U.S. Treasuries, which are ultra-long zero-coupon bonds that deliver maximum interest-rate risk. Last month's jump in Strips outstanding was the largest since October 2018.

Big in Japan. As our Stephen Spratt has pointed out, this month is the start of Japan's fiscal year. That can be a bumper period for global bonds, and the latest figures from the Ministry of Finance show the country's funds scooped up the most foreign fixed-income assets in five months. The life insurance heavyweights release more of their investment strategies in the coming week — not a great time to be short.