Just as Armin Laschet, the leader of Germany's conservatives, won the nomination to lead his party into September's election, a fresh poll suggested that the bloc is quickly losing its dominance of German politics. The Forsa poll released by broadcaster RTL last night showed Merkel and Laschet's CDU party slump 7 points to 21%, while the Greens gained 5 points to 28%. With a coalition of CDU and Greens seen as the most likely outcome in fall, the Greens' Annalena Baerbock may well succeed Merkel as chancellor, ending more than 15 years of center-right leadership in Germany. A separate question in RTL's poll identifies Baerbock as Germans' preferred candidate for the post, with 32% of respondents' support compared to Laschet's 15%.

Johnson & Johnson will restart shipments of its vaccine to the European Union after the bloc’s drug regulator said the benefits of the shot outweigh the risks of a possible link with cases of rare blood clots. The European Medicines Agency assessment on Tuesday echoed that of the vaccine from AstraZeneca, which has also been linked with the rare clot. In both cases, the regulator said Covid can be fatal and the use of vaccines is crucial to fighting the virus. The resumption will further speed up the region's vaccination drive, which has turned a corner this month thanks to increasing vaccine supplies.

Penthouse in Federation Tower is a unique property for sale in Moscow, Russia. Penthouse located on the 95-97th floors covered with a glass dome. It will be a new starting point for a person who has reached all imaginable heights. Federation Tower is the best complex in the world. Worthy of your status.

Former Minneapolis police officer Derek Chauvin was found guilty of killing George Floyd when he knelt on the man’s neck for over 9 minutes, a videotaped death that ignited a summer of rage and the greatest racial reckoning in the U.S. since the 1960s. Floyd’s death last May galvanized the Black Lives Matter movement, already active after years of previous killings by police and vigilantes. It also sparked an urgent debate about the broader issue of inequality and institutionalized racism even beyond the U.S., with protests in several European capitals.

Europe’s rebel soccer league crumbled just 48 hours after a dozen of the continent’s elite teams triggered an outcry from the sport’s authorities, politicians and fans with their controversial plan. All six English clubs — half the league's initial all-star membership — have withdrawn, leaving Spain's Atletico Madrid, FC Barcelona and Real Madrid as well as Italy's AC Milan, Inter Milan and Juventus to sift through the rubble. Atletico and Barca may also be in favor of jumping ship, the Telegraph reported last night. Stocks of exchange-traded clubs Manchester United and Juventus closed 6% and 4% lower, respectively.

Luxury shares from Burberry to Moncler and Hermes could be active after Kering reported 1Q sales that beat estimates, with Gucci reporting a 24.6% increase in organic sales. It’s a busy day in European earnings with Heineken, chip supplier ASML, Sweden’s Ericsson and Handelsbanken, Deutsche Boerse and Akzo Nobel among the firms announcing results. In the U.S., following Netflix’s disastrous quarter, it’s the turn of Verizon, Chipotle and Lam Research to give earnings. Elsewhere, the U.K. reports inflation data, and Russian President Vladimir Putin gives his annual address to the nation where he’s expected to announce spending measures to get the Russian economy moving.

While the eyes of the bond world are on the surprise decline in U.S. Treasury yields, their German counterparts have been busy creeping higher. Bund yields have risen to test a major long-term technical resistance level as expectations continue to improve for European growth. A weekly chart of 10-year yields shows they are close to breaking out of their three-year downtrend at a level which corresponds to important Fibonacci resistance. Traders are betting Europe will soon catch up with its global peers both in terms of the pace of vaccinations and its economic recovery. A break up and out of the long-term downtrend would point the way out of negative territory for the region's benchmark yield, which traded around minus 0.26% on Tuesday. Strategists at Goldman Sachs expect a rise to 0% and BNP Paribas see 0.2% as possible, which would be the highest since early 2019. 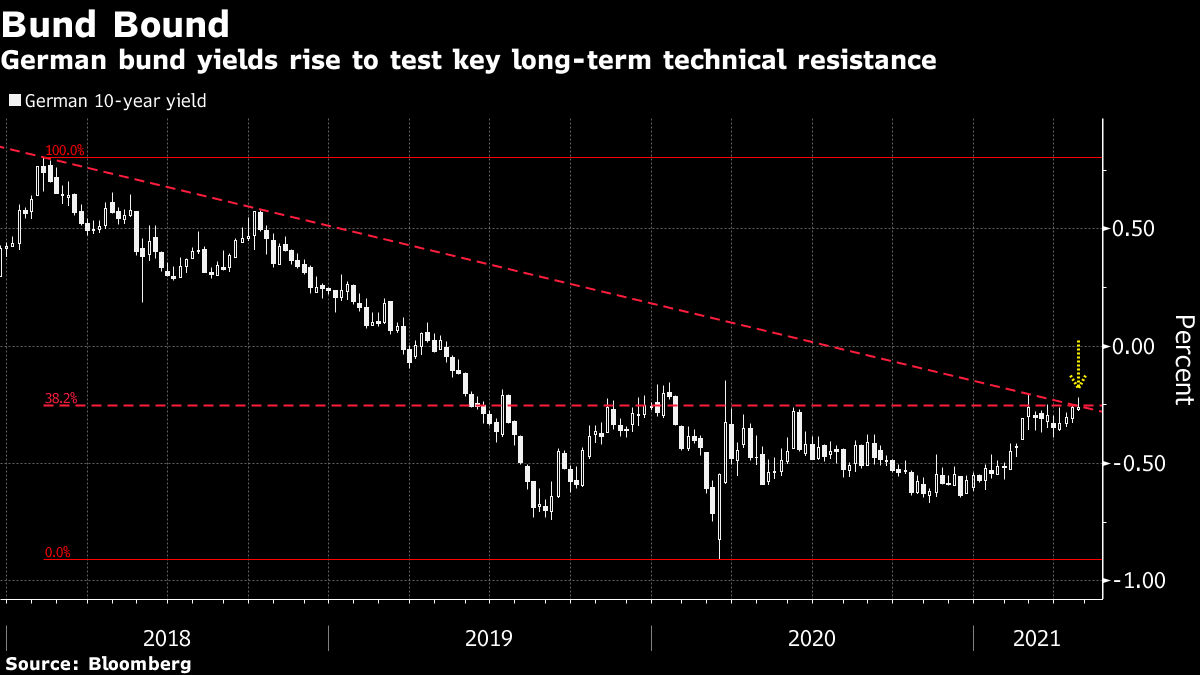