Tesla shares slipped a few percentage points in after-hours trading after the carmaker failed to offer a specific estimate for vehicle deliveries this year. That's even after the firm recorded a profit in the first quarter, navigated an industry chip shortage and made money off Bitcoin. "It wasn’t a blowout,” said one analyst, with lofty expectations reflected by last year's eight-fold stock rally.

Boris Johnson's latest controversy isn't going away, with the BBC reporting that the U.K. prime minister did say he would rather see "bodies pile high" than take the country into a third lockdown last year, despite his denial of an earlier report on the comments. Tuesday’s newspapers contain similar themes, with The Times suggesting the premier would rather let Covid-19 “rip” than close the economy again.

One in four adults in the European Union have received at least one dose of a Covid-19 vaccine, European Commission President Ursula von der Leyen said. That's even after supply issues with AstraZeneca and unexpected delays to the shot from Johnson & Johnson. Meanwhile, the bloc's largest economy, Germany, aims to open vaccinations to all adults by early June, Angela Merkel said. Pressure has been on the chancellor after a controversial lockdown law went into effect over the weekend.

OPEC and its allies project a firm recovery in global oil demand this year, though a committee report cautioned on resurgent coronavirus cases in India, Brazil and Japan, Bloomberg reports. Most of the fuel inventory glut accumulated during the pandemic will have dissipated by the end of this quarter, the group predicted. The alliance is due to consider whether it’s safe to proceed with plans to revive halted oil production. Brent crude futures are slightly higher.

A hectic day of earnings may give stocks proper direction, with European equity futures currently pointing to a slightly lower opening. Drugmaker Novartis, oil group BP and banks UBS and HSBC are among the big names reporting in Europe, while U.S. heavyweights later include technology megacaps Microsoft and Google-parent Alphabet, along with Starbucks and General Electric, among others. Elsewhere, Sweden’s Riksbank is expected to keep interest rates as they are, and U.K. Chancellor of the Exchequer Rishi Sunak will appear in parliament amid questions around Greensill Capital lobbying. And if that’s not enough, keep an eye on the sky tonight for the first supermoon of 2021.

Of all the major asset classes, only Treasuries stand out as the most out of whack with strategist expectations. The S&P 500 Index, U.S. Dollar Index, euro and oil are all within about a percentage point or so of year-end forecasts, suggesting no major moves are expected, according to data compiled by Bloomberg. Yet 10-year Treasury yields remain about 26 basis points below their target of 1.83% — the equivalent of a 14% gap. This month's surprise drop in yields is a big part of that divergence, even though it has done nothing to shake the almost iron-clad consensus that bonds are due another selloff as the year progresses. For those who suspect Japanese investors are behind the April bond rally, a slew of recent investment presentations from the country's life insurers provided little evidence of their involvement. Some of the world’s biggest debt investors, the lifers suggested they are holding off on aggressive purchases of Treasuries due to the risk of another rout and more currency volatility. 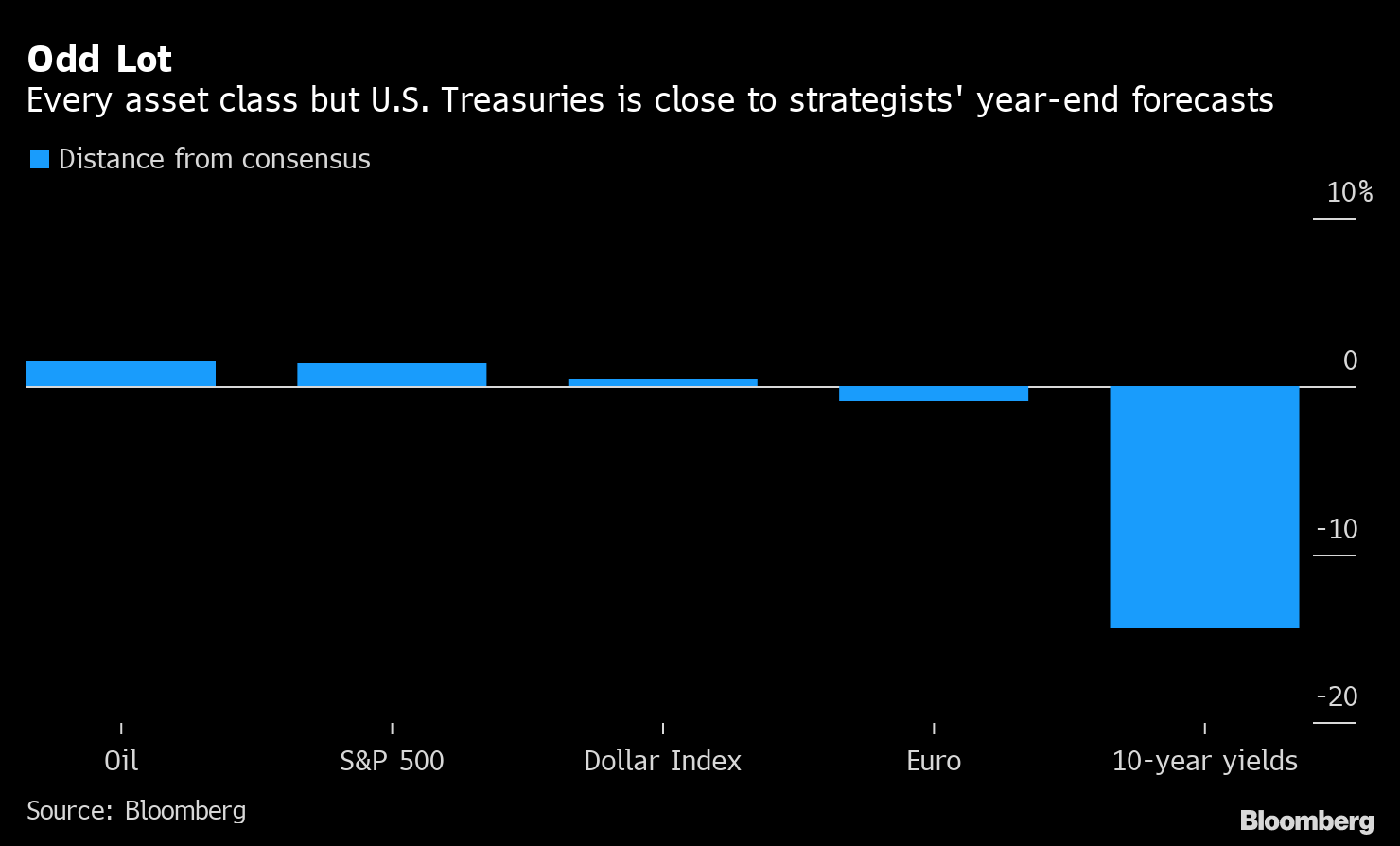