Good morning. Stocks were boosted by technology earnings and the Fed. Plus a change in Northern Ireland and a tariffs dispute. Here’s what’s moving markets.

Apple reported quarterly revenue that smashed Wall Street expectations, fueled by sales of the 5G iPhone and purchases of iPads and Macs during lockdowns. The company's new $90 billion share buyback authorization makes the $50 billion announced by Google-parent Alphabet this week look like loose change. The stock gained about 2% after hours, lifting Nasdaq index futures, which were also aided by a 6% surge for Facebook as the WhatsApp and Instagram owner reported a jump in active users and advertising sales. Next up: Amazon.

The Federal Reserve upgraded its assessment of the American economy but said it was not yet ready to consider scaling back stimulus. “Risks to the economic outlook remain,” the U.S. central bank warned after holding its key interest rate near zero and maintaining a $120 billion monthly pace of asset purchases. Government bond yields and the Bloomberg dollar index slipped. Still, analysts reckon the latest assessment is softer than previous a message of “considerable risks.” U.S. data later is expected to show a continued economic rebound.

Northern Ireland’s First Minister Arlene Foster plans to quit, potentially risking more instability after the Brexit settlement essentially created an economic border with mainland Britain, something that was partly blamed for recent riots. While Foster opposed the protocol, she did little to undermine it. Foster may be better remembered for forming a coalition that kept former-U.K. prime minister Theresa May in office back in 2017.

The U.S. and European Union are seeking to avoid an escalation in a row over tariffs on European metals exports, Bloomberg reports. At issue is a dispute that started in 2018 under former President Donald Trump that saw the U.S. impose duties on steel and aluminum from Europe, Asia and elsewhere. The EU has since retaliated and on June 1 is set to increase tariffs on a list of American products. U.S. officials see it as unlikely that their side could make a concession before June, the report adds.

It's another monster earnings day, with reports including lenders Natwest and Nordea, consumer goods giant Unilever, oil firm Shell and jet-maker Airbus. In the tobacco world, the U.S. regulator is due to decide whether to allow menthol cigarettes to remain on the market. Today's economic data also includes German unemployment. Finally, Turkey’s new central bank leader gives his first public policy presentation following a recent slump for the Lira.

China is still the magic ingredient for outperformance in the European stock market. The country's recovery has boosted the share prices of European companies that generate significant revenue from the world’s second-biggest economy. A Goldman Sachs basket of European stocks with the highest sales exposure to China has climbed about 16% this year through Tuesday, besting the regional benchmark by over 5 percentage points. It has beaten the Stoxx 600 Index by over 30 percentage points since last year's lows. The outperformance of China-exposed shares comes as stocks in the country itself struggle for traction, with the Shanghai Composite Index down 1% this year. The pandemic is well under control in the country, but stock watchers are now worrying about the impact of a tighter liquidity environment. Policy makers have signaled their intention to wind down pandemic-fueled stimulus as consumer spending rises more than expected and growth soars. That could mean the easy money has been made in the China-exposure theme and investors should be on the lookout for a sign of even a modest slowdown. 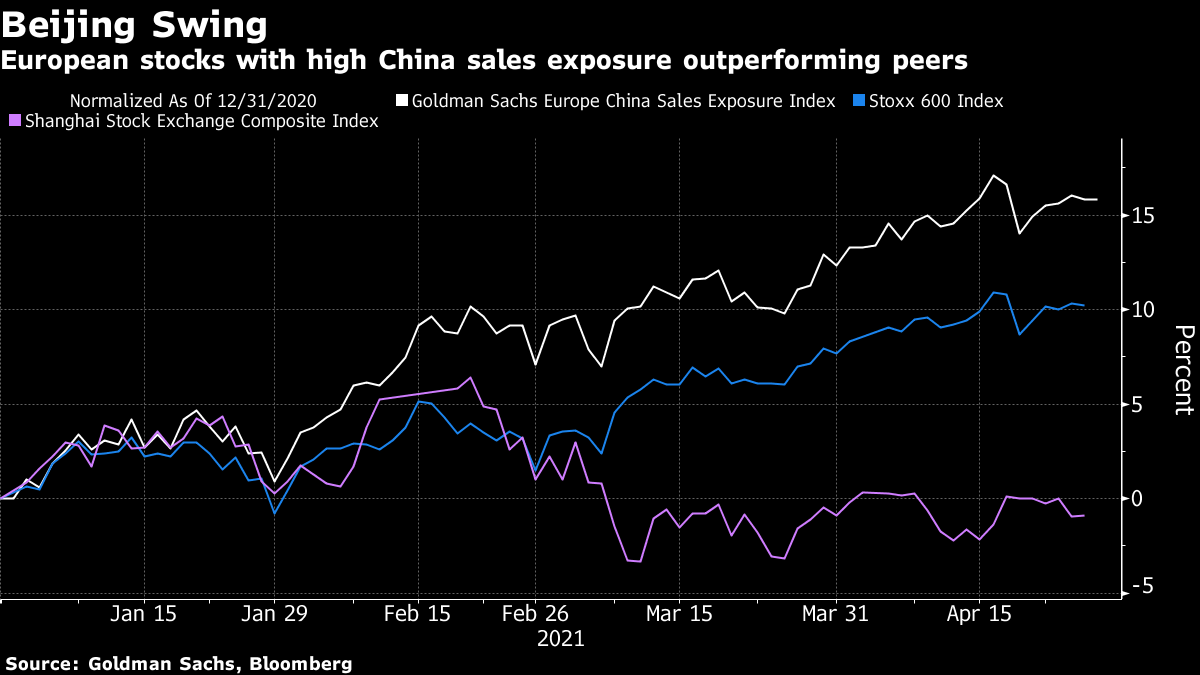