Good morning. Trump is back in the White House, 10% of people may have been infected with the virus, and Veolia got its hands on Suez. Here’s what’s moving markets.

U.S. President Donald Trump returned to the White House Monday evening after three days of treatment for Covid-19 at a military hospital, and officials plan to significantly restrict physical access to him as he continues his recovery. In a video released shortly afterward, Trump said “the vaccines are coming momentarily.” The president’s aides hope to keep him at the White House residence and away from the Oval Office but are uncertain how long that will last, according to people familiar with the matter. “We’ll be back on the campaign trail soon!!!” Trump tweeted before leaving the hospital.

The World Health Organization estimates that 10% of people worldwide have been infected with the coronavirus. That leaves 90% of the world at risk, said Mike Ryan, head of the WHO’s emergencies program, in a presentation to the WHO’s executive board. In Britain, almost 8,000 people whose positive coronavirus tests were left off official records due to “technical issues” had still not been contacted by the U.K.’s test-and-trace program on Monday. Meanwhile in France, diners in Paris and Marseille must keep masks on between courses starting Tuesday, part of rules to keep restaurants open in France’s maximum-virus alert areas.

Foot in the Door

French water utility Veolia Environnement SA succeeded in buying a 29.9% stake in rival Suez SA, setting the stage for a full takeover. The deal, which comes after Veolia increased its price for Engie’s holding and offered guarantees on employment, would create a global giant in waste and environmental services if it leads to a full acquisition. Suez remains fiercely opposed to what it calls a “hostile” approach, pledging to “use all means at its disposal to avoid a creeping takeover.”

Overnight, K+S AG agreed to sell its Morton Salt unit to Kissner Group for $3.2 billion, a move that would provide the German potash miner with much-needed funds to pay down debt. The company’s Americas salt division expects the deal to close in summer 2021, K+S said in a statement confirming a Bloomberg report. The shares rose 14% on Monday after confirming “very advanced'' talks toward the sale. Meanwhile, Nexi SpA is already hunting for its next target after agreeing a merger with SIA SpA, as consolidation in the payments sector shows little sign of easing. Milan-based Nexi made a non-binding bid for Denmark’s Nets A/S, people familiar said. Nets’s private-equity owners invited a select group of potential buyers to submit offers and could enter advanced talks with a preferred bidder as soon as this month.

Chatter about a so-called blue wave — the Democratic Party taking the presidency, Senate and House — has begun to eat into fears of extended financial market volatility from a contested election. The spread between three-week and two-month implied volatility in the yen — which covers the election period for the traditional haven — has retreated after Joe Biden's recent surge in election probability markets. As discussed yesterday, the Treasury yield curve steepened further overnight with 30-year yields surging to a three-month high as traders teased out the implications of the increase in fiscal spending and higher inflation that a Biden victory could bring. And stocks most sensitive to infrastructure spending and other government outlays outperformed. But there's still a month to go and signs that the Democrats are pulling into a clear lead will no doubt encourage Republicans — and a recuperating Donald Trump — to amplify a response to close the gap. The possibility of an extended period of volatility hasn't gone away yet. 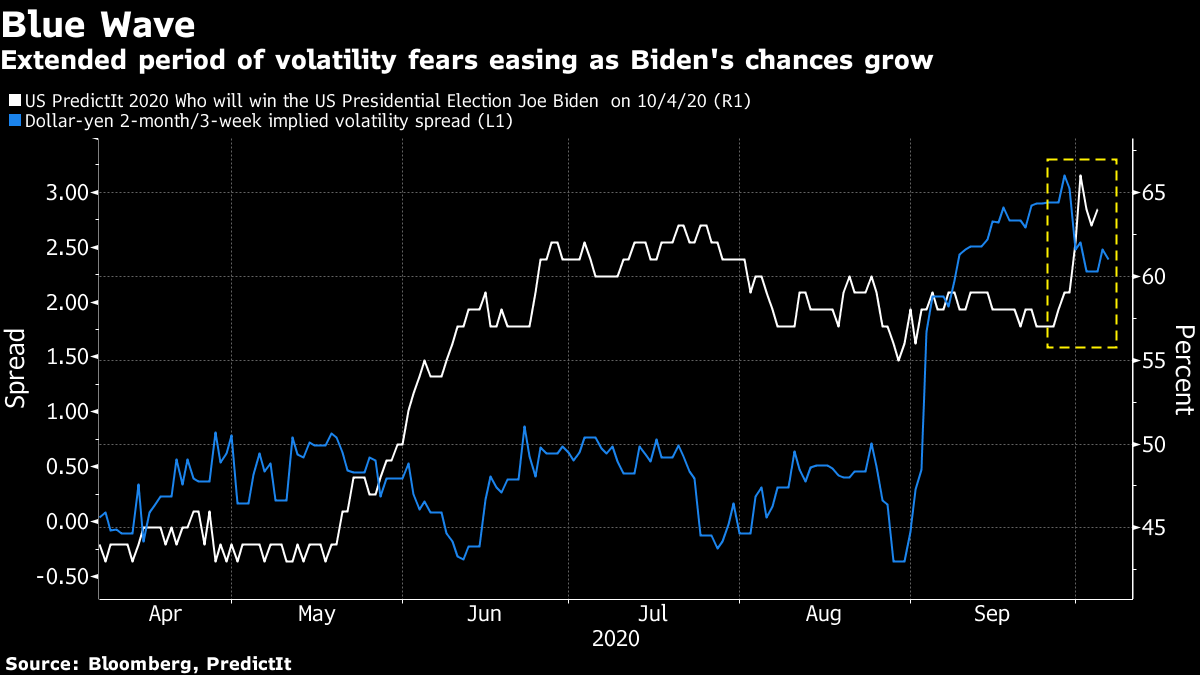