Congress looks at $4 trillion options, Yellen says there's no issue with inflation, and the real challenge to Bitcoin.

President Joe Biden plans to seek some Republican support for his ambitious $4 trillion plan, which would recast the government's role in the economy. While Biden's $1.9 trillion Covid-19 relief package passed with no GOP votes, there are parts of the infrastructure package that could be embraced by the party. Congressional leaders from both sides of the aisle have been called to a meeting at the White House on May 12.

The plan to increase taxes and fund new spending programs is part of a wider effort from the Biden administration to take action on U.S. wealth inequality. While the bigger tax bill will worry the rich, there are also questions about the inflationary implications of so much new money. Treasury Secretary Janet Yellen tried to allay those fears yesterday saying that she doesn't believe inflation will be an issue, and even if it were to arise, there are tools to address it.

While Bitcoin is seeing its price push back above $58,000 this morning, its dominance of the digital asset sector is fading. It now accounts for less than 50% of the total crypto market value of $2.3 trillion, according to tracker CoinGecko. Digital token Ether is taking the spotlight as it adds to recent gains to trade as high as $3,200 this morning, a 15-fold increase from a year ago.

Holidays dominate today's session so far, with China, Japan and the U.K. all closed for trading. Overnight, the MSCI Asia-Pacific ex-Japan Index slipped 0.7% amid mixed economic news in the region. In Europe, the Stoxx 600 Index was broadly unchanged at 5:50 a.m. Eastern Time with energy stocks among the worst performers as oil demand fears rose again. S&P 500 futures pointed to a move higher at the open, the Treasury cash market was closed and gold gained.

Here's what caught our eye over the weekend.

Bull markets are nice, because if you buy something now, it might be worth more at a point near in the future. But what's really good is if you have something to sell.

Do you have an old used car to sell? Good for you, because prices are absolutely soaring. Some old Pokémon cards for sale? There's such high demand for them now, reports VICE, that the company which grades the condition of old cards and comic books can't get enough workers, and is offering signing bonuses.

Do you have a company to sell? Well perhaps you've heard of the IPO and SPAC boom and the re-equitization of the stock market.

If you do a search on Twitter for "old dogecoin wallet" you'll find a bunch of people trying to remember passwords to old hard drives to recover their doge stash. The data bears this out. Back in mid-April when the price of went nuts, there was a huge surge in the number of doge that got moved for the first time in 5 years. This chart comes courtesy of Coinmetrics and Nic Carter, who explains: "Revived supply: total units of supply active on a given day that hadn’t previously moved on chain in x period (i.e. supply revived 5 years looks for all coins that had been dormant for 5 years and just awoke on that particular day)." 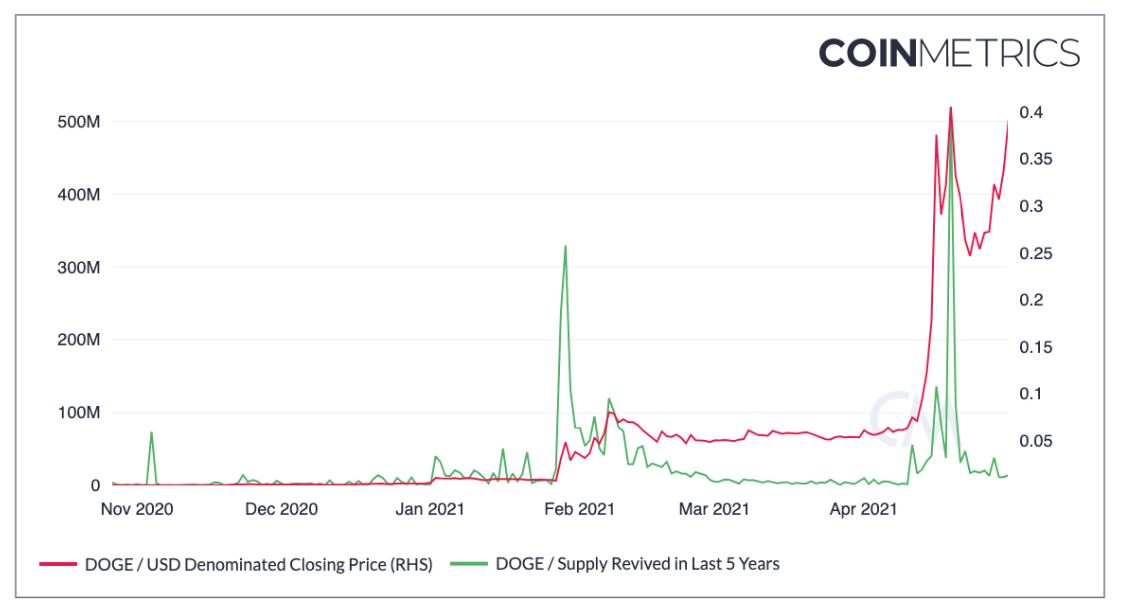 Something I think about pretty often is Matt Levine's take on WeWork's Adam Neumann, which is that you can think of him as something of a short seller. Someone who identified that the value of tech unicorn stuff was inflated, and so found a way to sell that to investors before the value collapsed. Right now if you have a used car or some old doge or a vacation house you don't go to, it's a sellers market. And if you don't have any of those things, you can just do what Adam Neumann did and create something new. Although no need to start a whole company. Just mint an NFT or a memecoin on PancakeSwap and get selling.

Joe Weisenthal is an editor at Bloomberg

Protected: OP: Sell In May And Go Away?