Inflation fears have been at the forefront of investors’ minds for some time now, but that has come sharply into focus this week. On Wednesday, data showed U.S. consumer prices jumped the most since 2009, well ahead of expectations, a print that roiled a variety of assets. Whether price pressures prove to be a transitory risk, as Federal Reserve officials have consistently said, will continue to be a central question for markets. As will bets on when the Fed may hike rates and on how long it could take for inflation readings to settle down. European stocks mostly shrugged off the worries on Wednesday but futures are trending lower following declines in Asia and the U.S.

Bitcoin prices plunged after Tesla Chief Executive Elon Musk said the electric-vehicle maker will suspend purchases using the cryptocurrency, marking a significant u-turn from one of the key backers of the digital asset. Musk cited concerns about the use of fossil fuels for Bitcoin mining and transactions, indicating Tesla may accept payment in greener digital currencies. Crypto-linked stocks sunk late in the U.S. and in Asia. At the same time, others remain bullish on digital tokens. The crypto expert at Ark Investment Management believes Bitcoin is a multi-trillion dollar opportunity over the long-term.

Where Does the Gaming Industry Go From Here?

Last year, limited entertainment options outside the home led to a surge in video game and esports interest. Yet we still believe this is just the beginning of the gaming industry’s growth journey.
Explore what we see ahead in 2021.

The U.K. government has been urged to accelerate vaccines in areas where case numbers are rising, ahead of the further relaxation of Covid-19 restrictions next week. Meanwhile, U.S. regulators approved the use of the Pfizer-BioNTech shot for adolescents, the U.K. is reconsidering its plan to buy AstraZeneca antibody drugs and Norway has removed the Astra shot from its program. More worryingly, Brazil is running out of ingredients for Astra and Sinovac shots, while South Africa has seen a spike in Covid cases, though officials say it is not a third wave. And the new special envoy to the World Health Organization warned that the worst is not over yet, with progress in wealthy nations obscuring problems elsewhere.

Tensions over fishing rights, which have already resulted in navy ships being dispatched by the U.K. and France, took a new turn. France is threatening to hold up British access to European Union financial markets until the issue of fishing is solved. Also on Europe’s political agenda, Italian Premier Mario Draghi said the European Union needs to ease its fiscal rules in order to allow more investment to help the bloc recover. And the EU said Russia is gradually attempting to absorb parts of Ukraine, setting the stage for further tensions on this front.

Investors will be keen for further comments from officials on the inflation situation, with St. Louis Fed President James Bullard and Bank of England Governor Andrew Bailey due to speak at events. Earnings highlights in Europe include telecoms giants Telefonica and BT, plus U.K. luxury house Burberry and engineer Rolls-Royce. Among other earnings we’ll get Chinese internet giant Alibaba and, coincidentally given Bitcoin’s plunge, numbers from crypto exchange Coinbase. Watch too for any impact of the Colonial gas pipeline restarting in the U.S. after it was shut down by a cyberattack.

A second surprise, leverage-driven selloff in about as many months hit global stock markets Wednesday, highlighting once again the dangers of borrowed money chasing risky assets. Following the blowup of Archegos Capital Management in late March, a slump in Taiwanese stocks triggered margin calls that pushed the local benchmark into a sharp decline as investors liquidated positions. Taiwan's successful management of Covid and a stock market led by its world-class chipmakers had attracted huge investor interest, and they juiced their gains with leverage. At one point the benchmark Taiex Index was up about 20% year-to-date and the value of margin debt surged 46% this year to about $10 billion at its peak at the end of April, the highest since 2011. That fell by a net $461 million on Wednesday when the Taiex tumbled as much as 8.6%, according to exchange data compiled by Bloomberg. As discussed here recently, U.S. margin debt topped $822 billion by the end of March — the latest available data — and up 72% year-on-year. A day like Taiwan just had for the U.S. would be the equivalent of a $38 billion margin call. 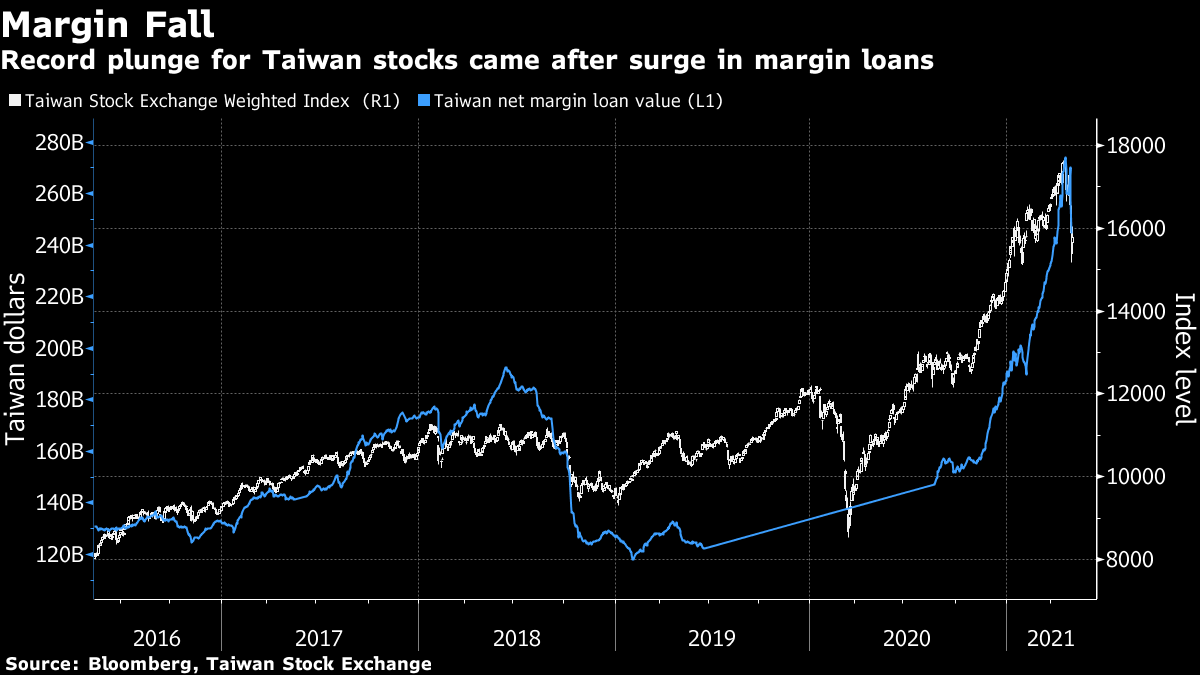 Some big news — We've launched a new section called Odd Lots, an expansion of our popular markets podcast with Bloomberg News Executive Editors Joe Weisenthal and Tracy Alloway. Become a Bloomberg.com subscriber to get access to Odd Lots stories on the latest market crazes, Joe and Tracy's weekly newsletter and more. Five Things subscribers get 40% off.

Market On Close Imbalance: $1.9B to sell and not much warning.