U.S. President Donald Trump ended talks with Democratic leaders on a new stimulus package, hours after Federal Reserve Chair Jerome Powell’s strongest call yet for greater spending to avoid damaging the economic recovery. “I have instructed my representatives to stop negotiating until after the election when, immediately after I win, we will pass a major Stimulus Bill that focuses on hardworking Americans and Small Business,” Trump said in one tweet among 40 sent during a 2-hour period late on Tuesday. U.S. stocks fell sharply and the S&P 500 Index closed down about 1.4%.

After resisting a late-summer virus resurgence experienced by its neighbors, Germany has become the latest European country to bring back sweeping restrictions to contain the pandemic, including late-night curfews for bars and restaurants in Frankfurt and Berlin. In both cities, trailing 7-day cases per capita had spiked in recent days. In France, the number of intensive-care patients with Covid-19 reached the highest since May, while hospital admissions in England returned to highs last seen in late June. Meanwhile, the U.S. Food and Drug administration set safety conditions for ongoing vaccine development that may delay a roll-out past November's presidential election.

A panel of the U.S. House of Representatives proposed far-reaching antitrust reforms to curb the power of U.S. technology giants including Amazon.com Inc., Facebook Inc. and Alphabet Inc.’s Google. The findings describe them as gatekeepers of the digital economy that have abused their power to snuff out competitive threats, leading to less innovation, fewer choices for consumers and a hobbled democracy, the report said. Its most consequential recommendation is for Congress to consider legislation that would prevent tech companies from owning different lines of businesses, which could lead to a mandate to break them up. Facebook fell as much as 1.2% in late trading.

French president Emmanuel Macron is standing firm on his demand to keep the same access to British waters his country’s fishing industry enjoys today, according to officials familiar with the talks. That’s angering the British and creating tensions even among his allies within the EU. As the Brexit talks enter their final critical few weeks, officials on both sides are voicing doubts over whether they can get a deal over the line. EU negotiators say that while they wait for Prime Minister Boris Johnson to offer concessions on state aid — the other major obstacle to an accord — Paris’s stance on fish is becoming a second major focus of concern.

Euro Stoxx futures are pointing to a negative open, tracking similar moves in Asian markets, while U.S. futures are fluctuating. Tesco Plc. earnings are coming up, with analysts looking for signs on how a pandemic-driven sales boost translated to profitability, and media reports of an imminent CFO appointment. On the macro front, German and Spanish industrial production for August is due, and U.K. July house prices are scheduled later in the morning. In the afternoon, get ready for Poland's central bank rate decision.

The European Central Bank is urging for more economic stimulus and investors seem to be betting they'll get it. A Stoxx 600 gauge of cyclical stocks — those most exposed to an economic recovery — has beaten its defensive peer by more that 3% over the past two weeks, reversing much of September's underperformance. The move comes as Citigroup Inc.’s economic surprise index for the euro area — a measure of whether economic data beats or falls short of analyst expectations — shows signs of stabilization following a slump from early August. Comments from both ECB President Christine Lagarde and chief economist Philip Lane released Tuesday signaled the need for extra monetary and fiscal stimulus to help the euro-zone sustain its economic recovery. Remarks from German Chancellor Angela Merkel the same day included a vow for government support for the country's economy. The agreement in principle between central bankers and law makers makes a refreshing change from the stimulus spat across the Atlantic and will help sentiment for Europe's cyclical bulls. But they will likely need more than just talk to keep the reignited rally continuing. 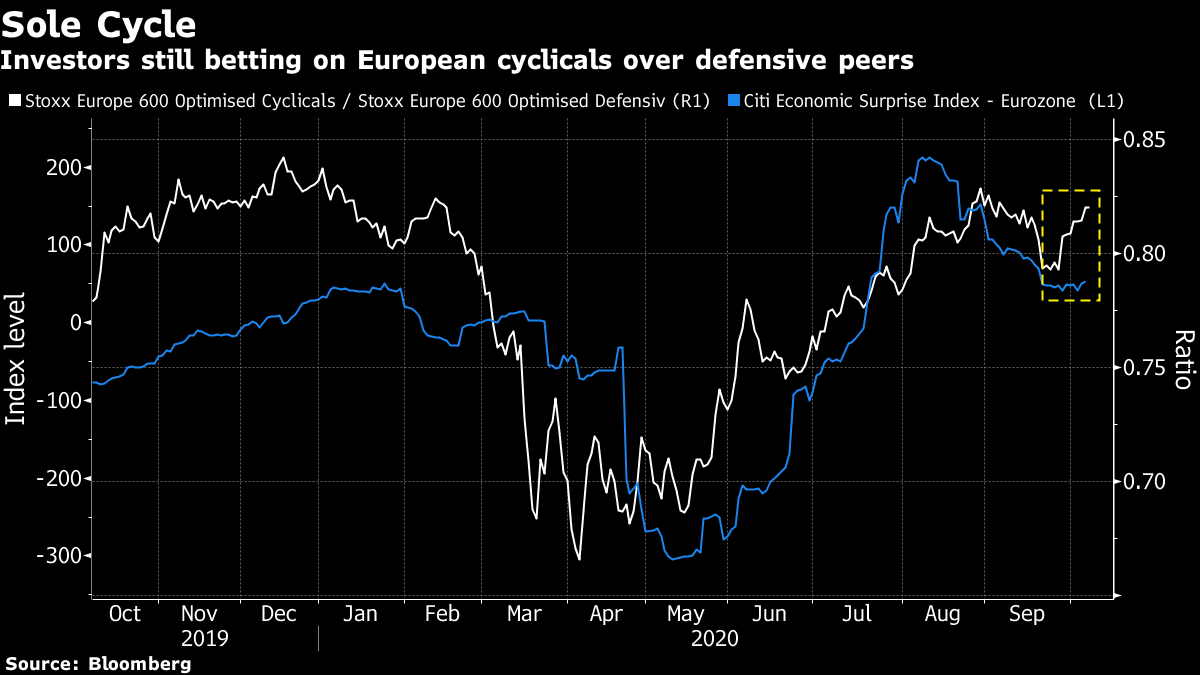