Good morning. Europe's virus cases are spiraling out of control again, Trump may target Ant Group, and the state of Brexit talks may not be as bad as it seems. Here’s what’s moving markets.

France and Spain posted record increases in coronavirus cases, underscoring growing alarm in the region as it loses control of the pandemic. New infections in France increased by 18,746, health authorities reported on Wednesday, while the number of Covid-19 patients in intensive care in Paris hospitals has tripled since the start of September. The Czech Republic, which had been successful in containing the pandemic through summer, emerged as the continent’s worst hotspot, with the most cases per capita over the last two weeks. Meanwhile,  Regeneron Pharmaceuticals Inc. said it has asked U.S. federal regulators to authorize its antibody treatment for Covid-19 for emergency use. President Donald Trump received the antibody cocktail last Friday under a compassionate use program.

The U.K. government threatened on Wednesday to pull out of trade talks with the European Union if no clear deal is in sight by Oct. 15. The EU’s chief Brexit negotiator, Michel Barnier, then told a meeting of European ambassadors that he didn’t expect the U.K. to walk away, according to officials present. Officials in Brussels with knowledge of the negotiations suggest an elaborate choreography is being worked out, in which, despite some level of differences remaining, both sides will find a way to carry on discussions into the second half of October. Beyond the brinkmanship, there are signs that the two sides are getting closer to overcoming some the biggest obstacles to a deal.

U.S. House Speaker Nancy Pelosi signaled openness to an airline-relief bill in a call with Treasury Secretary Steven Mnuchin after President Donald Trump pulled his negotiators from broader stimulus talks. Such a stand-alone measure doesn't appear to include other elements of what was to have been a comprehensive relief package, including another round of $1,200 stimulus checks previously demanded by Republicans. An S&P 500 gauge of airline stocks closed 3.5% higher in U.S. trading. In election news, U.S. Vice President Mike Pence faced Democratic opponent Kamala Harris in their first TV debate, seeking to project composure after the debate of the main candidates unraveled into chaos. Harris attacked the President's handling of the pandemic, with U.S. deaths per capita one of the highest among developed countries.

The Trump administration is exploring restrictions on billionaire Jack Ma’s Ant Group as well as Tencent Holdings Ltd. over concerns that their digital payment platforms threaten U.S. national security, according to people familiar with the matter, a move that risks infuriating China and disrupting what could be the world’s largest initial public offering. U.S. officials are concerned that Ant Group and other Chinese fintech platforms will come to dominate global digital payments, the people said. That in turn could give China access to banking and personal data of hundreds of millions of people.

Though U.S. equities are being buffeted by the will they-won't they back-and-forth over further stimulus, equity bulls can take solace that a closely-watched gauge of market leadership is quietly pushing higher. The Philadelphia Semiconductor Index has risen to a 20-year relative high against the S&P 500. The gauge of U.S.-listed semiconductor producers has rallied nearly 4% so far this month and is often seen as a leading indicator for the broader market. A combination of demand for 5G smartphones, video-game consoles and work-from-home equipment is expected to offset a slump in industrial markets for chipmakers, helping to boost sentiment toward semi stocks. The SOX Index is also trading at a slight discount to U.S. benchmarks, providing a valuation case for the group. But more importantly for the broader market, semis have often proved a canary in the coalmine, turning lower before the major indexes do. That makes their recent outperformance an encouraging sign for bulls. 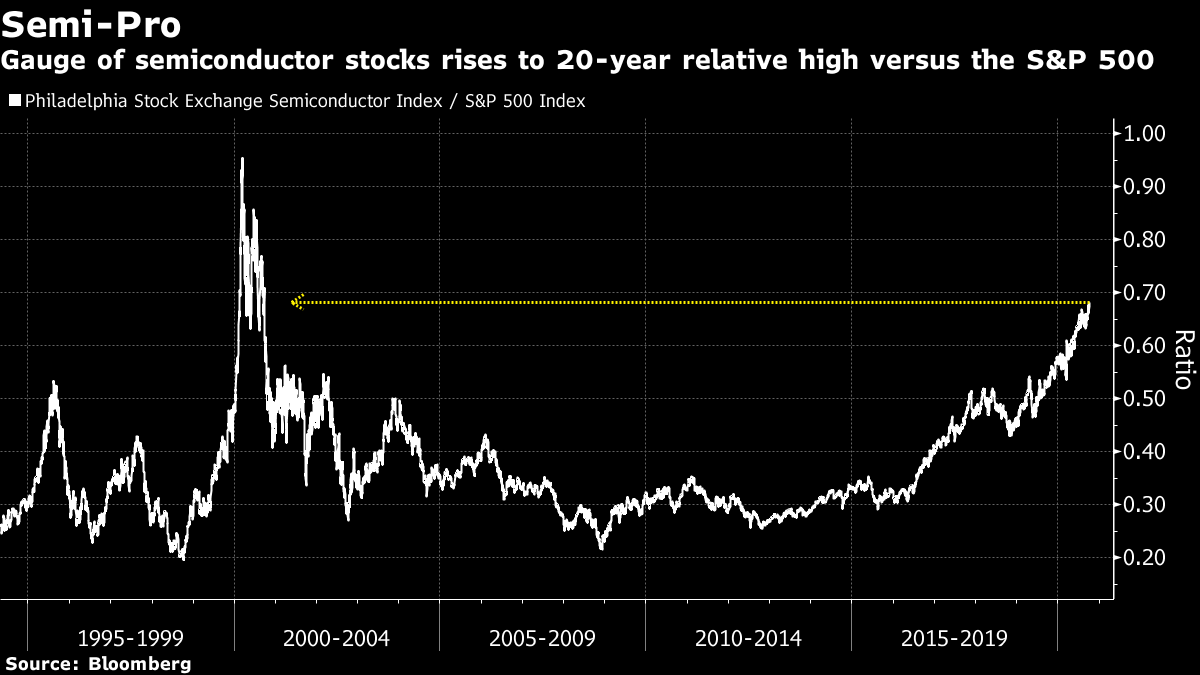