The Senate passes a sweeping bill to help the U.S. compete with China. Bitcoin’s approaching a “death cross.” Problems at the world’s largest vaccine maker leave countries short of shots. Here’s what you need to know to start your day.

The Senate passed by a wide margin an expansive bill to invest almost $250 billion in bolstering U.S. manufacturing and technology to meet the economic and strategic challenge from China. The 68-32 vote on the legislation was a rare spot of bipartisanship in an otherwise polarized Senate and a clear indicator of the concern in both political parties that the U.S. risks falling behind its biggest global competitor. However, the bill’s fate in the House is uncertain. The vote came after the White House’s top official for Asia, Kurt Campbell, said China has only itself to blame for a global backlash against its policies. “Over the last year or two the country that has done the most to create problems for China is not the United States, but China,” he said.

Asian stocks look set for a mixed open as U.S. equities trod water near a record ahead of key inflation data. The 10-year U.S. Treasury yield fell to a one-month low. Futures slipped in Japan but edged higher in Australia and Hong Kong. The S&P 500 ended little changed just shy of its May 7 record close. The focus remains on Thursday’s report on U.S. consumer prices, which may affect perceptions of when the Federal Reserve is likely to start discussing tapering asset purchases. The dollar advanced for the first time in three days, while oil resumed its rally to top $70 a barrel in New York.

Access to clean water is a potentially dire global challenge. Fortunately, a shift to a more sustainable model is possible. Learn more about the forces key to this transition, and why we believe it represents a compelling sustainably-themed investment opportunity.

Amid Bitcoin’s decline this week, eagle-eyed chart-watchers noticed an ominous-sounding technical breach could be at hand: the coin is approaching a bearish pattern known as a death cross. 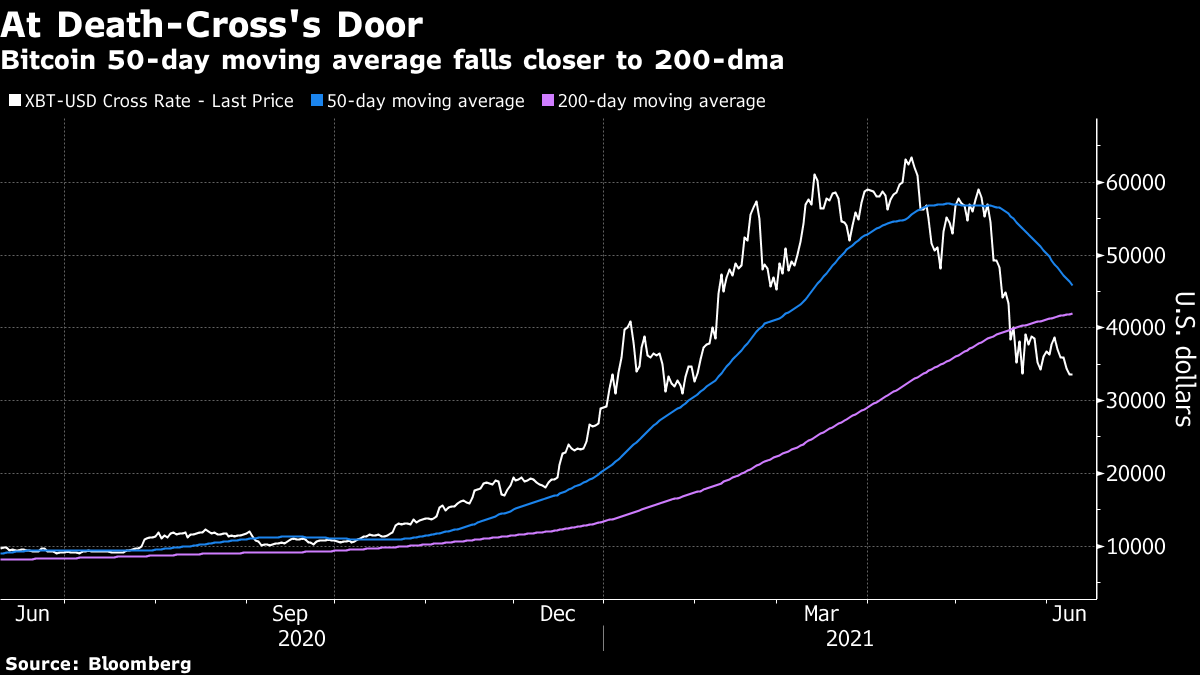 The world’s largest digital currency has slumped, pushing its average price over the last 50 days close to its 200-day moving average. Should the short-term line cross below the long-term one, the coin would reach the forbidding formation. The indicator is typically seen as a closely-watched technical measure that could offer a hint at more pain to come. The last time Bitcoin marked a death-cross was in November 2019 and the cryptocurrency was down roughly 5% one month after crossing it. On Bitcoin, here’s the murky tale of how the FBI recovered the ransom paid to the Colonial pipeline hackers.

The world’s largest vaccine maker, Serum, was last year named a top supplier of Covid shots to Covax, the World Health Organization-backed initiative aimed at securing a global rollout. But the Indian company has been dogged by setbacks, from a ban on exports to a factory fire, that have hampered its ability to fill orders. Covax pledged to send shots to some 92 countries, but has so far received only 30 million of the minimum 200 million doses it ordered from Serum. It’s a key illustration of how the effort to inoculate against Covid has failed the developing world. Meanwhile, sequencing has shown the Delta variant is the major strain Singapore and the U.S. has loosened travel warnings for dozens of nations in a move that could ease airline restrictions. Here’s all the latest global news on the pandemic.

Soon after Nomura got burned on the collapse of Archegos Capital Management, its executives vowed to revamp its prime brokerage. Insiders and hedge funds are starting to grasp what that means for those operations in the U.S. and Europe: There won’t be much left. Within the Tokyo-based firm, executives privately predict its plan to rein in risks will shrink the prime brokerage unit in Asia, and curtail it much more dramatically in Europe and the U.S., where Nomura was relatively small but was attempting to expand. Word of the retreat is already spreading on Wall Street.

One of the oddities of the current cycle is that inflation is most stark in parts of the world where you’d traditionally not expect it, and much more subdued in some places where you would. The below Deutsche Bank chart illustrates that dynamic pretty well. It aggregates a bunch of national inflation measures (CPI, PPI, various PMI components, etc.) and the rates at which those measures are accelerating or decelerating into one big bar chart. Places like Sweden, the U.S., Taiwan, and Germany are all towards the top, and therefore experiencing more inflation at a faster rate, while a bunch of emerging markets, including China, are at the lower end of the scale.

One way of viewing that data is that inflation really is 1) a problem centered on goods, and 2) perhaps most extreme in places that went into full lockdown and are now struggling to restart supply chains and so on. In that sense, the rise in inflation might be much more about places like the U.S. and Western Europe effectively “importing inflation” as domestic demand for stuff massively overwhelms supply, rather than about places like China “exporting” it. Here’s Deutsche Bank’s Alan Ruskin, purveyor of said chart:

“Other developed countries to watch include Sweden, where bottleneck pressures appear particularly acute and supply delivery prices are the highest since 1995. Bottleneck pressures are showing up in Taiwan and Germany — countries usually better known for low inflation. Taiwan has rapidly shifted from disinflation to reflation, and ranks top for sharpest inflation acceleration, presumably in part reflecting microchip shortages.

In Europe, it is notable how the EUR periphery sometimes associated with greater inflation pressures than the core, are this time showing much more subdued price pressures. Instead, goods inflation pressures are centered in the industrial heartland of Central and Northern Europe. This fits with thoughts that much of the inflation pressures so far are allied to goods logistic and capacity problems, and have much less to do with services.

In contrast, the G10 countries that stack up well in terms of more subdued price pressures, at least when peer ranked, include, not surprisingly, Japan, and perhaps more surprising Australia and New Zealand. It is possible that economies that did not shut down because of COVID, are also not seeing the same stark division between sectoral winners and losers, that in the recovery phase is creating inflation pressures in the strong sectors. In addition, neither Australia or NZ have strong manufacturing sectors. Lastly, much of the easy money-related price pressures are showing up in Antipodean asset prices like housing, rather than goods prices, so far.” 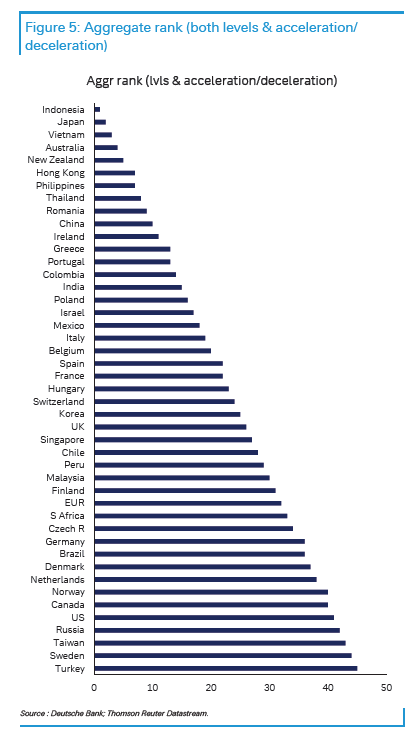