Consumer prices in the U.S. top forecasts, stoking inflation fears. Global regulators propose tough capital controls for crypto. Australia and Singapore are working on a quarantine-free travel corridor. What you need to know to start your day.

Prices paid by U.S. consumers rose in May by more than forecast, extending a months-long buildup in inflation that risks becoming more established as the economy strengthens. The consumer price index climbed 0.6%, the second-largest advance in more than a decade. Though distorted by the pandemic, the CPI jumped 5% from a year ago, the largest annual gain since August 2008. The gains were in large part driven by the pricing snapback in categories associated with a broader reopening of the economy. The question economists and investors are wrestling with is whether these factors will have a temporary impact on inflation as the Fed expects or whether they will become more ingrained against a backdrop of massive fiscal and monetary policy support. Some think the Fed’s latest strategy on inflation risks triggering a  full-blown recession.

Bitcoin rallied following a proposal from global regulators that would introduce capital requirements for banks dealing in crypto. The announcement from the Basel Committee on Banking Supervision is another sign that the world of traditional finance is responding to the rise of crypto assets. While the proposal would introduce tough capital controls, it shows regulators are taking the market seriously and preparing the banking industry for how to deal with widespread adoption. The ruling sparked immediate reaction across Wall Street and other financial centers — here’s what people are saying. And here’s what happened when El Salvador made Bitcoin legal tender.

Access to clean water is a potentially dire global challenge. Fortunately, a shift to a more sustainable model is possible. Learn more about the forces key to this transition, and why we believe it represents a compelling sustainably-themed investment opportunity.

Asian stocks look set for a steady open after U.S. shares and Treasuries rallied as investors judged that a jump in inflation is likely to be transitory. Equity futures were little changed in Japan and Australia, and higher in Hong Kong. The S&P 500 Index climbed to a record overnight and a rally in tech heavyweights boosted the Nasdaq 100. The 10-year Treasury yield fell to 1.43%, its lowest point since March. The dollar weakened.

Just eight months after celebrating a narrow escape from financial disaster, Chinese billionaire Hui Ka Yan finds himself back in crisis-fighting mode. Resurgent concerns about the health of China Evergrande Group, Hui’s flagship property company, have pushed its stock to within a hair’s breadth of the lowest level since March 2020. Bondholders are rushing for the exit too, spooked by missed payments at the developer’s affiliates and a report that regulators are probing Evergrande’s ties to an obscure bank in northern China. And the turmoil has the potential to spread much wider. Hui’s net worth is down by more than half from a 2020 peak, according to the Bloomberg Billionaires Index.

Australia is working with Singapore on setting up a travel corridor  allowing quarantine-free travel between the countries, Prime Minister Scott Morrison said. The nations are among a handful of Asia-Pacific countries that have managed to contain the coronavirus. Separately, Singapore said it would relax its Covid rules in stages. Elsewhere India marked record daily deaths after Bihar state adjusted its death toll, saying Covid-19 had killed 9,429 people, nearly double its previous count. And Japan could be facing another Covid surge with or without the Olympics, a new analysis shows. Finally, here’s what makes the so-called Delta variant so worrisome.

One of the really interesting things about markets right now is the degree to which stocks might have something to say about the future direction of the Federal Reserve and benchmark interest rates. Because the “transitory” inflation thesis rests on supply shocks and bottlenecks in production, you can watch certain equities tied to sectors that are most affected by shortages to try and figure out whether investors see price pressures continuing. (Of course, there’s a massive caveat here, that multiple bottlenecks and higher transport prices mean companies can ultimately see their sales fall even if prices for their goods are surging. Recent results from Resolute Forest Products are one example of this.)

For instance, Thursday’s higher-than-expected inflation print in the U.S. was once again driven by a jump in the cost of used cars and trucks, with that category accounting for about one third of the total monthly advance in CPI. At the same time, however, stock investors seem to be implying that the huge price jump in previously-owned cars might have peaked. Share prices of used car companies like CarMax, Penske, and Sonic have been losing steam relative to the S&P 500, suggesting that the massive premium from earlier in the year is now getting priced out. 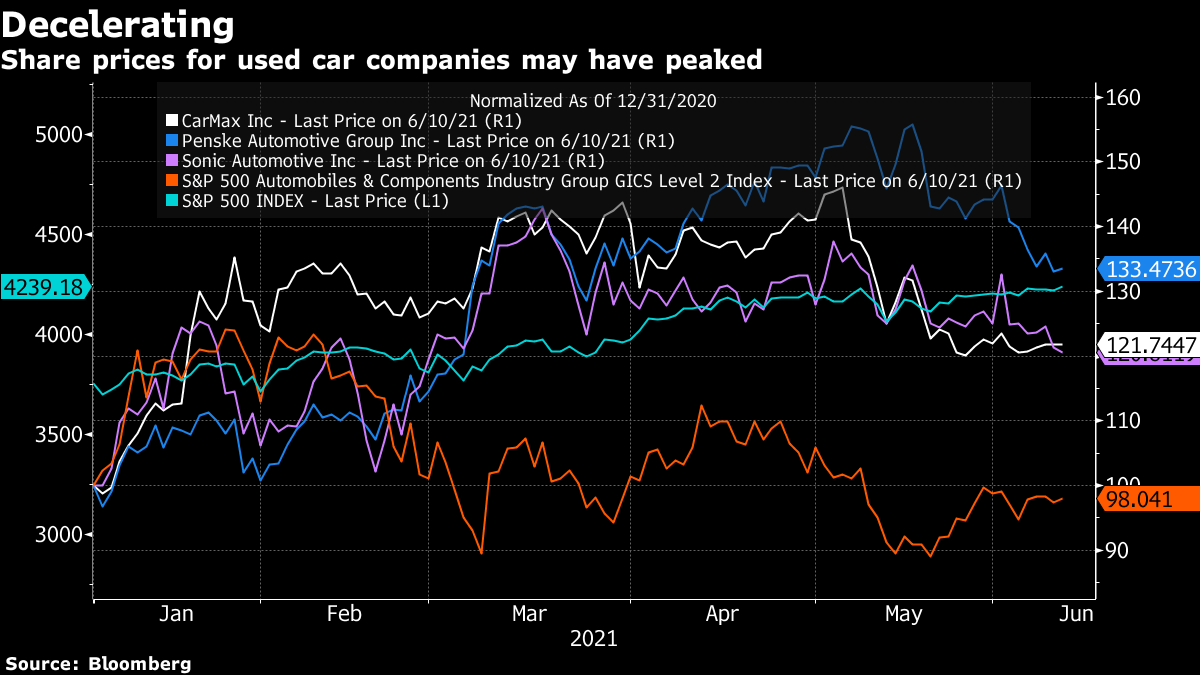 As Ben Emons at Medley Global Advisors puts it: “For markets, a used car has become one of the indicators for a directional change in Fed policy. If used car prices — and other items like airfares, hotels, rentals, lodging — do slide down over the next quarter(s), the transitory effect on CPI is likely ebbing. That could be a start of a change in messaging by the Fed. If sustained, that could be another indicator that temporary phenomena like used car prices are self-correcting as demand begins to substitute for other goods (e.g. cheaper new cars).”

Market On Close Imbalance: Buy trend is over… -$1B sell imbalance