For all the talk of a commodities boom, some markets have now wiped out gains for the year, while others are close to doing so. Soybean futures yesterday erased their 2021 advance, while corn and wheat have recently declined. Other commodities that have seen big rallies evaporate include platinum, while once-surging nickel, sugar and even lumber have slipped. Thursday’s commodities retreat came as a hawkish Federal Reserve meeting added to the unwinding of the inflation trade. Oil had its biggest decline  in weeks. Still, the fact that some markets are falling while others are holding gains partly reflects how unevenly the space is responding to economies reopening.

There’s fresh uncertainty in Northern Ireland as Democratic Unionist Party leader Edwin Poots is stepping down as leader of the biggest political grouping after just three weeks. The news came hours after the U.K. government said it would push laws through Parliament giving more weight to the Irish language. That policy is resisted by the DUP, but is a condition of Sinn Fein — a party dedicated to the reunification of Ireland and an end to British jurisdiction — for it to continue power sharing. The instability also comes just as the U.K. government asks the European Union to prolong a trade grace period relating to Northern Ireland, seeking to avoid an imminent ban on some meat products that could aggravate post-Brexit tensions.

Investing in the Next Wave of Innovation

Traditional sectors are becoming more enmeshed with emerging technologies, in what is called the Fourth Industrial Revolution. We recently explored what Industry 4.0 means for investors and how disruptive themes can potentially be captured in a portfolio.

Armin Laschet, the front-runner to succeed Angela Merkel as chancellor, called for the reinstatement of European Union budget rules once the pandemic is over, as he outlined plans for a somewhat more assertive Germany after September’s election. His position on EU budget criteria sends a signal that Germany may return to its role as the bloc’s fiscal watchdog, putting pressure on highly indebted countries like Italy. In another potential source of coalition tension, Laschet insisted Russian gas would flow through the controversial Nord Stream 2 pipeline. With little more than three months before the national vote, Laschet has cemented his place as the strong favorite to lead Europe’s largest economy.

Hospitals across the U.S. have reported a rise in lung transplants for severe coronavirus cases, according to one of the country’s top medical centers. The grueling surgery may be the only solution for patients who experience a life-threatening combination of lung damage inflicted by the virus, a hyper-inflammatory immune response to it, and the body’s failure to properly repair the injury. In other pandemic news, the U.K. recorded the most coronavirus cases in a day since mid-February, amid the spread of the delta variant, even as eight in 10 adults have now had their first vaccine dose.

European stocks are broadly flat, following Asia’s lead as investors in the region also unwound some of the dominant reflation trades and the Bank of Japan’s policy decision failed to excite. That was despite the promise of a new climate change-related funding mechanism. Today’s a quiet day for scheduled events, though supermarket group Tesco is set to release a trading statement. Meanwhile, Iranians are going to the polls for the presidential election to choose President Hassan Rouhani’s successor. Finally, on relations with the U.S., North Korean leader Kim Jong Un said he’s ready for “both dialogue and confrontation,” potentially offering an opening for talks with Biden.

Is this the end for the reflation trade? That’s the question being asked in the aftermath of the hawkish Federal Reserve pivot as investors bailed out of economically-sensitive cyclical stocks into their defensive peers and unwound bets on a steeper yield curve in the bond market. The spread between 5- and 30-year Treasury yields tumbled by most since February in the two trading sessions through Thursday, and is now below where it started the year. That’s a negative signal for the world’s cyclical shares, which have begun to rollover but remain ahead of their defensive peers by over 5 percentage points this year, according to gauges from Goldman Sachs. Investors are now wagering a faster-than-expected pace of tightening from the Fed could temper economic growth and higher inflation, and weigh on the chances of an overshoot in both. A flatter yield curve would likely favor defensive names like healthcare and consumer staples stocks and could trigger a reversal of the inflows seen into cyclical shares since late last year. 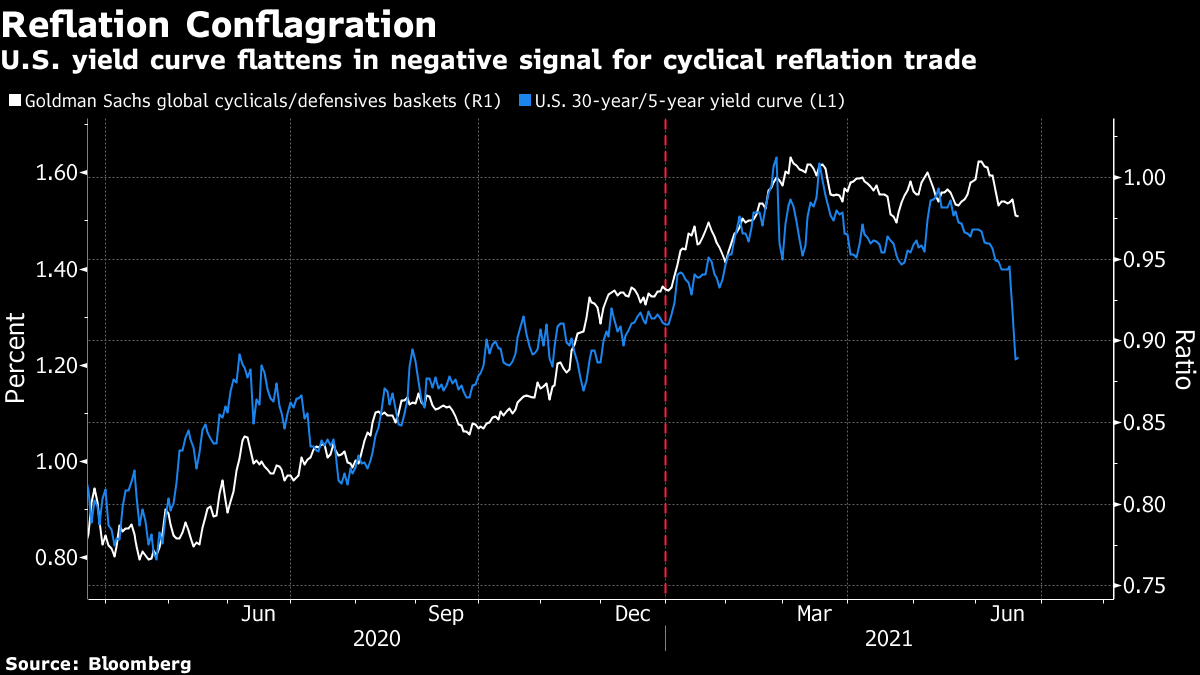 Market On Close Imbalance: $1.7B to buy. Party’s not over