Biden delays the target date for sending donated vaccines abroad. The Bitcoin “death cross” has arrived. Asian stocks are set to track a bounce in U.S. equities. Here’s what you need to know to start your day.

President Joe Biden is delaying a target date for overseas shipments of 80 million doses of coronavirus vaccines donated by the U.S., with logistical hurdles and millions of shots produced by AstraZeneca still in a safety review. The White House on Monday announced a list of countries that would receive 55 million doses, includin India, Pakistan, Taiwan, Philippines and Vietnam, after previously detailing the first tranche of 25 million. In total, three-quarters of the 80 million will be sent through Covax, the World Health Organization-backed vaccine procurement effort. Meanwhile, Hong Kong is cutting mandatory hotel quarantine to seven days for full vaccinated travelers; as vaccines reduce death rates some countries are learning to live with Covid; and here’s a look inside the Olympic Games athletes’ village and the Covid measures protecting athletes and staff.

Asian stocks are set to track a rebound in U.S. equities as the prospect of very gradual policy tightening tempers some of the concerns about the Federal Reserve’s hawkish tilt. Treasuries and the dollar retreated. Futures rose in Japan, Australia and Hong Kong. The S&P 500 rallied the most in five weeks, outperforming the technology-heavy Nasdaq 100, aided by a revival of the value trade in sectors like energy and financials. Crude oil and gold jumped as a dollar gauge snapped a six-session winning streak. Federal Reserve Chair Jerome Powell said inflation had picked up but should move back toward the U.S. central bank’s 2% target once supply imbalances resolve.

Companies Leading the Rise of Cybersecurity

If we’re lucky, cybersecurity can feel like an afterthought – something working in the background. This perception confronts the reality that with an ever-growing number of online threats, the cybersecurity theme is driven by dozens of highly innovative companies. We recently profiled four of the key players.

Bitcoin has officially formed a death cross, meaning its average price over the last 50 days fell below that of its 200-day moving average, after a slew of news related to renewed crackdowns from China triggered a selloff. The indicator, seen coming by many analysts, is a closely-watched technical measure that could offer a hint at more pain to come. Bitcoin fell Monday to a two-week low, dropping as much as 11.4% at one point to $31,735, after China announced that it had summoned officials from its biggest banks and Alipay to a meeting to reiterate a ban on providing cryptocurrency services. Elsewhere The Big Short’s Michael Burry warned retail traders about “the mother of all crashes” in a series of tweets about cryptocurrencies and meme stocks.

Global banks including HSBC and Standard Chartered are ramping up hiring to tap into China’s latest market opening — a new investment link with Hong Kong that could yield almost $500 million a year in fees. The investment scheme will allow bank customers in nine southern Chinese cities such as Shenzhen to invest across the border in Hong Kong and vice versa, further integrating the $1.7 trillion regional economy. The “Wealth Connect” plan, set to launch mid 2021, could open up 3 billion yuan ($464 million) in annual fees for global banks and their domestic rivals including Bank of China. In other HSBC news, four of its most senior U.S. bankers are heading for the door.

PlayerUnknown’s Battlegrounds, one of the most successful games of all time, is set to create vast riches when the company behind it goes public next month. Krafton founder Chang Byung-gyu could be worth as much as $3.5 billion if the firm’s initial public offering prices at the top end of the range given in its IPO filing, according to the Bloomberg Billionaires Index. Krafton is seeking to raise as much as 5.6 trillion won ($4.9 billion) in Seoul in what’s likely to be South Korea’s largest ever IPO. Chang will hold 14% of the shares after the offering.

China’s renewed crackdown on crypto has led to mining shutdowns, which have in turn impacted the supply of new Bitcoins and sent the hash rate falling to a six-month low. Meanwhile, Bitcoin futures moved into backwardation earlier this month for the first time since 2018 — meaning traders are pricing near-term contracts at higher levels than longer-term ones. Now the curve continues to fall lower and lower, as the below chart shows.

Bitcoin futures moving into backwardation is a rather big deal since the curve isn’t quite like the ones you’d traditionally find in commodities. Its natural state is contango, meaning longer-term contracts should be priced at higher levels than shorter-term ones. That makes a lot of sense given that the cryptocurrency is designed for scarcity and price appreciation. Big traders could capitalize on the shape of the curve by buying Bitcoin spot and selling futures — a classic “risk-free” arbitrage trade — to erode some of the spread between spot and longer-term contracts. But in general, the contango persisted given idiosyncrasies around the Bitcoin market and the difficulty of lending cash in it and so on. 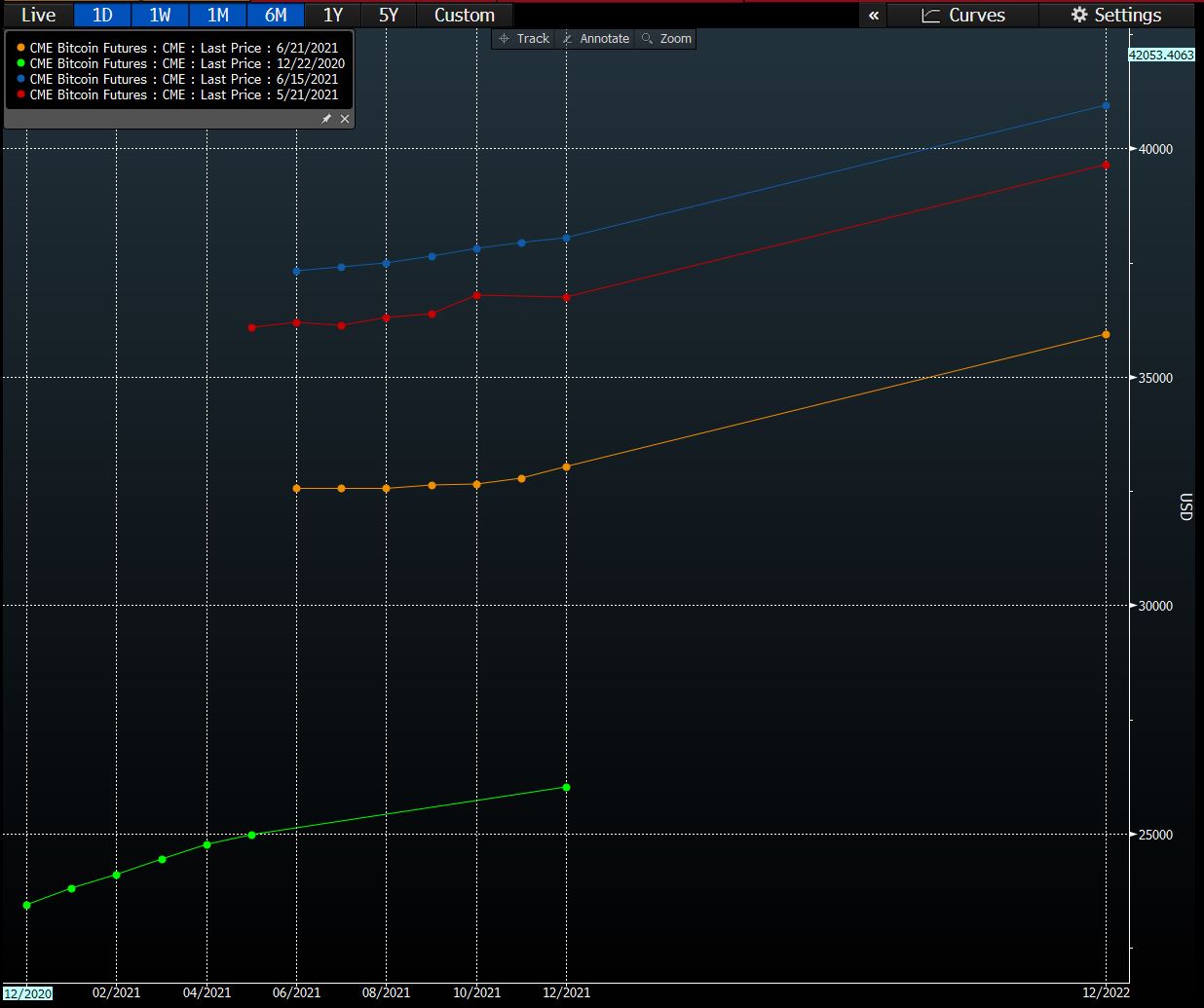 In that sense, backwardation is a pretty bad sign. It means institutional investors and traders are no longer no recognizing a fundamental tenet of Bitcoin: that the price will go up, or at least hold, over the future. They’re also willing to leave money on the table in the form of that cash and carry trade as they try to bail out of a sinking ship.

Market On Close Imbalance: $1.3B to buy, small buy sentiment