Weekly initial jobless claims are expected to move back below 400,000 after last week’s surprise pop higher. This morning’s number may also show the impact of the gradual withdrawal of enhanced unemployment benefits from June 12 in some states. The data lands at 8:30 a.m. Eastern Time. At the other end of the workday, the Federal Reserve will release its latest stress test results when markets close, with the big six banks expected to pass — paving the way for increased dividends and share buybacks.

Democratic and Republican senators crafting a bipartisan $559 billion infrastructure plan will meet President Joe Biden in the White House today. Any deal would need at least 10 Republican votes to pass in the Senate, with tax issues among the main sticking points to date. The Senate group is striving to reach an agreement before lawmakers leave Washington on Friday for a two-week break.

As the inflation debate seemingly shifts from “how much” to “how long”, we explore investment opportunities to help investors navigate the markets and play the inflation trade. Click here to learn more.

Today’s Bank of England decision marks the last meeting for the institution’s hawkish chief economist, Andy Haldane. While there are no policy changes expected to be announced in the 7:00 a.m. decision, the rise of U.K. inflation above the bank’s target has increased speculation about the timing of future tightening. Speaking of hawks, Federal Reserve Bank of Atlanta President Raphael Bostic said that he would be in favor of lifting rates in 2022 and that tapering could happen in the next few months.

Global equity markets are rallying today as stocks gain some momentum after being stuck in the doldrums for most of the week. Overnight the MSCI Asia Pacific Index added 0.1% while Japan’s Topix index closed 0.1% lower. In Europe, the Stoxx 600 Index was 0.7% higher at 5:50 a.m. as business confidence in the region jumped. S&P 500 futures pointed to strong open, the 10-year Treasury yield was at 1.494%, oil held above $73 a barrel and gold edged higher.

As well as claims, we get the third reading of first quarter U.S. GDP and durable goods orders for May at 8:30 a.m. Kansas City Fed Manufacturing is at 11:00 a.m. There are no fewer than six regional Federal Reserve presidents scheduled to speak today. Mexico’s central bank announces its latest policy decision at 2:00 p.m. Nike Inc., FedEx Corp. and Carnival Corp. announce results.

Here’s what caught our eye over the last 24 hours.

Headline measures of inflation have been hot lately, but they’re largely being driven by specific reopening categories or supply chain bottlenecks. These pressures should ease as things normalize. The perception that this is all transitory is a view shared by both Federal Reserve Chair Jerome Powell and the bond market.

There’s one big category for consumers that hasn’t really started going up yet (per the official statistics), but which many people expect to start moving: the Owner’s Equivalent Rent. It plunged last year, and it’s still at depressed levels. But with all kinds of housing indicators on the rise, there’s a big assumption that it too will gather steam. Because this category alone represents about a quarter of the entire CPI, watching it is a pretty big deal.

Yesterday on TV we talked to UBS economist Alan Detmeister about this dynamic. The whole clip is worth watching. But there were a few key points.

The first is that yes, this will almost certainly jump substantially, especially since market measures of rents that we’re seeing now, based on private sector data, are clearly on the rise. 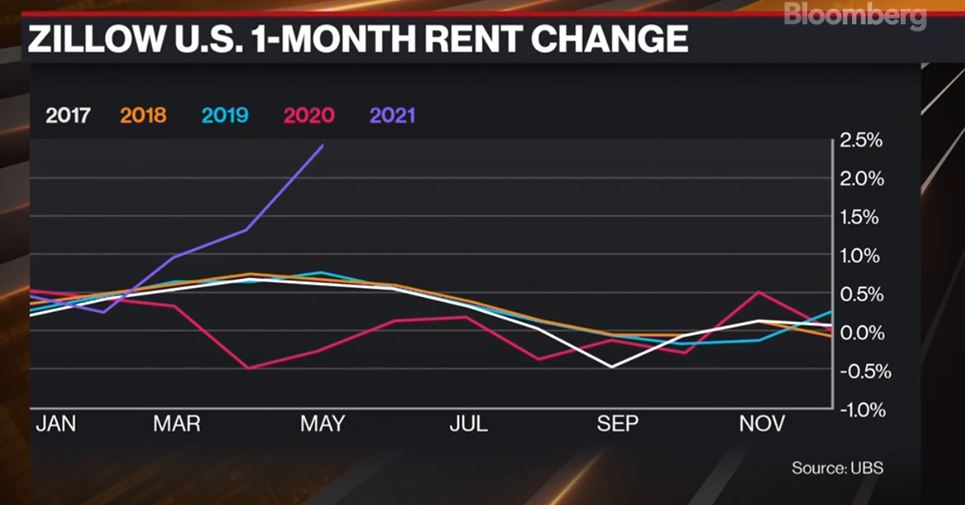 That being said, the measure isn’t just going to instantly spike, since not everyone is taking out a new lease right now. The CPI is based on a rolling average over several months. (Some people moved into a new place six months ago, for example, and so that’s what they’re still paying now.) However because it’s a slower-moving index, the effect of any rise is going to last for a while, probably well into next year.

Another interesting dynamic is that while OER is about 25% of CPI, this category is less than half as big in the PCE (which is the Fed’s preferred inflation measure). This, he says, is going to create a substantial and unusual spread between the two measures (he predicts a 120 basis point gap compared to the usual 30). This will create some other tensions, because financial markets (things like TIPS) tend to price CPI, so there will be a disparity between how the Fed is looking at inflation vs. what the market is reacting to.

Ultimately, however, Alan believes that the “transitory” narrative is likely to prevail, particularly as the economy normalizes, and consumption shifts back from goods to services. That being said, in the short term he expects hot inflation readings, leading perhaps to a more hawkish stance from the Fed.

Joe Weisenthal is an editor at Bloomberg

Buy protection when you can….