President Donald Trump’s newfound enthusiasm for a large stimulus package does not appear to be enough to get a deal over the line. The administration is blaming House Speaker Nancy Pelosi for a lack of progress while she called the latest offer a “miserable and deadly failure.” White House economic adviser Larry Kudlow said a deal is not essential for the economic recovery, and suggested targeted assistance might be enough. Treasury Secretary Steven Mnuchin is expected to continue talks with Pelosi this week knowing that even if they do come to agreement, there is little chance of getting legislation passed by Congress ahead of the election.

Deal or no deal

You may have heard this one before, but this week is definitely a crunch one for Brexit negotiations. Talks between the U.K. and EU over their post-Brexit relations continue in Brussels today, targeting a deal ahead of Thursday’s leaders summit. Prime Minister Boris Johnson held talks with both French President Emmanuel Macron and German Chancellor Angela Merkel over the weekend in an attempt to find a breakthrough. While optimism remains a deal will be found, both the U.K. and EU negotiators have said they will not do one at any cost.

See how it impacts you

European leaders are looking to new containment measures as the spread of the coronavirus continues to quicken in the region. While the resurgence in the virus so far appears to be less deadly than the outbreak in spring, the sheer number of cases risks overburdening hospitals. Boris Johnson is set to tighten rules in the U.K. as daily case numbers there have recently hit record highs. In the U.S., there’s been a walk-back from easing in many places. Even JPMorgan Chase & Co. CEO Jamie Dimon, a strong advocate of a rapid return to office work, admitted that it may be the middle of next year before things are back to normal.

Global equities are pushing higher again today as investors watch talks on U.S. stimulus while starting to turn their attention to earnings season which begins tomorrow. Overnight, the MSCI Asia Pacific Index added 0.6% while Japan’s Topix index closed 0.3% lower. In Europe, the Stoxx 600 Index had gained 0.4% by 5:50 a.m. Eastern Time led by technology and financial stocks. S&P 500 futures pointed to a higher open, oil dipped below $40 a barrel and gold dropped. Bond trading in the U.S. is closed for a holiday.

In the midst of the Eurozone crisis, numerous commentators used to warn that the U.S. risked becoming the “next Greece” by dint of its high public sector borrowing. Despite the fact that the monetary setup of the two countries is completely different, the fear was that eventually owners of U.S. debt would go on strike, forcing Washington DC into a policy of crippling austerity. Obviously this fear hasn’t panned out, nor is it likely to.

However the heterodox economist Michael Hudson, who has done significant work on the history of debt, has a different argument about how the U.S. could go down the same route as Greece. On the latest episode of the Odd Lots podcast with me and Tracy Alloway, he makes the case that ballooning private debt burdens over time have the effect of diminishing demand, consumption, and ultimately investment, essentially creating a de facto austerity. Instead of a government being forced into a policy of austerity in order to keep paying bond investors, it’s about individuals, households, small businesses and regional public entities (like, say, the NYC subway) being forced into degradation due to its debt load. In other words, austerity as an emergent phenomenon, as opposed to a discrete policy choice. 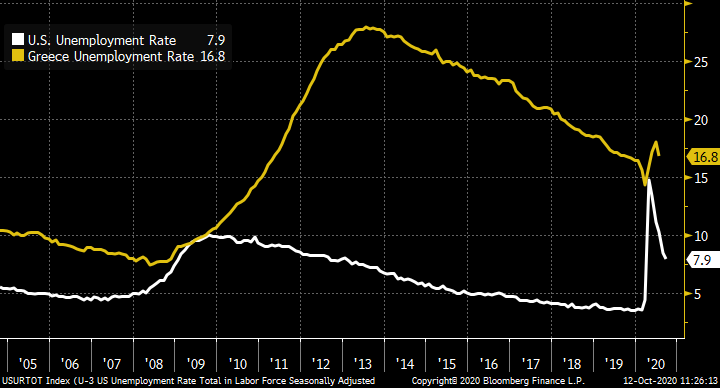 Of course, policy is still important. And a big part of Hudson’s work has been the study of debt jubilees or forgiveness, which is an idea that gets batted around from time to time, often in the context of student loans. As he explained, the ancient king Hammurabi engaged in such jubilees, though they weren’t universal. They specifically applied only to debts owed to the state after mass crises. So in other words, there’s a long history of private sector obligations being taken onto the government’s balance sheet in order to wipe the slate clean, and get the economy restarted after a disaster. Another way of saying it is that the best way for the U.S. to avoid becoming “Greece” is for Washington to spend even more to make whole the private and sub-national entities whose finances have been clobbered by the COVID-19 disaster.

Check out the whole conversation at the link above or on iTunes here.