Biden’s hard-edged China policy doesn’t bode well for relations between the world’s two biggest economies. Apple is working on a “buy now, pay later” service. China’s GDP will be scrutinized for signs of a post-pandemic slowdown. Here’s what you need to know.

Piling on the Pressure

The U.S. will warn American companies this week of the increasing risks of operating in Hong Kong, as Washington seeks to ramp up pressure over Beijing’s crackdown on the financial center. Meanwhile, Biden will nominate a former Defense Department official to lead a Commerce Department agency that will be a key player in limiting China’s access to cutting-edge technology. And White House officials are discussing proposals for a digital trade agreement covering Indo-Pacific economies as the administration seeks to check China’s influence in the region. Six months into his presidency, Biden’s hard-edged China policy suggests relations between the world’s two biggest economies are only going to get worse.

Asian stocks are set for a mixed start after Wall Street fell from a record and bond yields rose following a surprise U.S. inflation jump that stirred the debate on how long Federal Reserve policy can stay ultra-loose. Futures slipped in Japan and Hong Kong and were little changed in Australia. The S&P 500 slipped for the first time in three trading sessions as traders digested a release showing the highest inflation since 2008 as well as mixed earnings reports from JPMorgan and Goldman Sachs.
The Treasury yield curve saw volatility. Weak demand for the monthly 30-year bond auction unleashed a bout of steepening that reversed a flattening move spurred by hot June inflation readings. The dollar jumped.

After rounds of negotiations, the White House announced it had reached a consensus with a bipartisan group of senators. As debate shifts to the full congress, we recently explored the private sector’s role in US infrastructure development, profiling four companies at the forefront of this theme.

Apple is working on a new “buy now, pay later” service which would let consumers pay for any Apple Pay purchase in installments over time. The upcoming service, known internally as Apple Pay Later, will use Goldman Sachs as the lender for the loans needed for the installment offerings. This is how the company plans to make it work: When a user makes a purchase via Apple Pay on their Apple device, they will have the option to pay for it either across four interest-free payments made every two weeks, or across several months with interest, one person familiar with the plan said. The system could help drive Apple Pay adoption and convince more users to use their iPhone to pay for items instead of standard credit cards. Apple receives a percentage of transactions made with Apple Pay.

After China’s surprise central bank support last week, key economic data released Thursday will be scrutinized for signs of a post-pandemic slowdown. Debate is growing over whether China will shift from its gradual monetary and fiscal tightening, which began late last year after a rapid V-shaped recovery from the coronavirus pandemic. While the People’s Bank of China said last week’s action was a liquidity operation and not a sign of a change in policy direction, the sudden and broad move took many by surprise and stoked concerns about the growth outlook. The GDP report will come after new figures showed China’s export growth unexpectedly picked up in June, accelerating to 32.2% in dollar terms from a year earlier, and overturning economists expectations of a slowdown to 23%.

City-dwelling families in India are being forced to line up on the streets for food rations as the country’s hunger crisis worsens. Millions of people saw their economic toehold ripped away in lockdowns over the last 12 months, with more than 15 million losing their jobs in May alone. In one study, 90% of respondents said their households had suffered a reduction in food intake as a result of lockdowns. Meanwhile Ho Chi Minh City has ordered Samsung and other companies with factories in the Saigon Hi-Tech Park to suspend operations; Singapore’s karaoke clubs have become virus hotspots; Malaysia’s record Covid cases may go even higher; and the U.K.’s decision to ease restrictions even as another wave hits has sparked calls for caution.

One of the most interesting things about the closely-watched release of U.S. inflation data was the immediate market reaction to it. As CPI came in hotter than expected, with a 5.4% jump year-over-year verses expectations for a 4.9% increase, the yield curve flattened with traders putting on bets that the Federal Reserve would stomp out higher prices with interest rate hikes (so much so that the longer-end of the curve is getting close to inverting as the spread between 20-year and 30-year U.S. Treasuries narrows). Risk assets like stocks dropped, while safe havens such as the dollar rose. 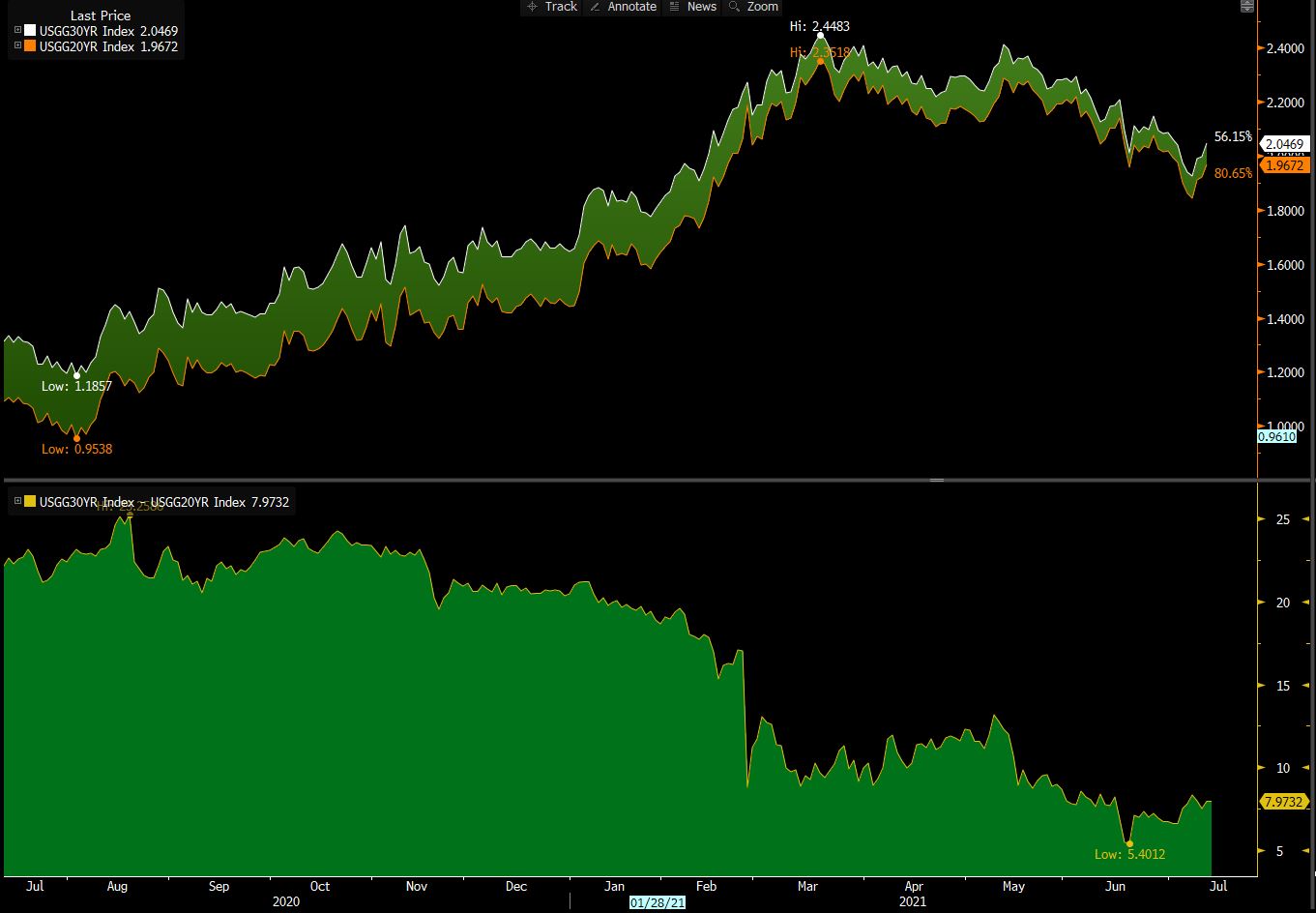 One simple way of reading the market reaction is that investors have abandoned the idea of a truly new “reaction function” at the Fed, or the notion that the central bank would tolerate significantly higher inflation and run the economy hot. Instead the market seems aligned in the belief that the central bank will come in and do pretty much what you would have expected it to do before the announcement of its new inflation-targeting framework — raise rates to cap inflation. The market reaction here tells you that the idea of the “Old Fed” is in and the “New Fed” is out.

Protected: OP: It Was All Good Until The TLT Came Along – Now What?