A study in Hong Kong found that BioNTech’s mRNA vaccine produces antibody levels that are about 10 times higher than after the Sinovac shot. This highlights a growing inequality of the pandemic era: The gap between nations that have messenger RNA vaccines and those that don’t. Just a handful of facilities in the U.S. and Western Europe account for almost all of the world’s mRNA vaccine supply — leaving many countries in a desperate race to catch up.

More than 42 people have died and dozens more are missing in western Germany as the country faces its worst flooding disaster in decades. Following heavy rain Wednesday night into Thursday, floods also swamped parts of Luxembourg, the Netherlands and Belgium, where at least four people have perished. Heavy rains are expected to continue over the next few days, with the storm moving toward southern Germany and Switzerland today. Extreme weather events such as floods, drought and heatwaves are expected to increase as the planet warms, scientists warn.

Container shipping rates from Asia to the U.S. and Europe increased to record levels over the past week, ensuring transportation costs will stay elevated for companies heading into a peak season for rebuilding inventories. The spot rate for a 40-foot container from Shanghai to Rotterdam rose to an all-time-high $12,954. Reasons for the tight market include a shortage of actual containers amid spiking import volumes to the biggest U.S. West Coast seaport.

U.S. President Joe Biden said his Covid-19 advisers are weighing when to lift prohibitions on travel from Europe, after German Chancellor Angela Merkel raised the issue in a White House meeting on Thursday. “It’s in process now,” Biden said at a news conference with Merkel following their meeting. “I’m waiting to hear from our folks, our Covid team, as to when that should be done.” He said to expect an answer “within the next several days.”

European equities look set for a mixed day, with stocks in Asia dropping after President Joe Biden said his administration will warn U.S. companies about the risks of doing business in Hong Kong. Today, there are updates from luxury retailers Richemont and Burberry, with the latter still looking for a new CEO. Sweden has a busy earnings day with Ericsson, Swedbank and Atlas Copco all reporting. In the U.S., State Street, Charles Schwab and Kansas City Southern all report earnings, while investors will be watching June retail sales after last month’s figure disappointed.

And finally, here’s what Garfield Reynolds is interested in this morning

The bond market’s inflation expectations could be set to move lower after a decisive downturn for crude underscored Federal Reserve Chairman Jerome Powell’s messages that price pressures will prove transitory. Oil is headed for its steepest weekly drop since March and the drivers — virus angst and OPEC+’s struggles to maintain output discipline — signal the potential that crude will struggle to push sustainably higher in the coming months.

If the best has been and gone for the oil rally, that would add to speculation that inflation is going to slow down. Breakevens recently broke away from crude futures — the 60-day correlation hit the most negative since 2005 — as the initial reaction to OPEC+ squabbles drove up oil prices. Going forward, it is likely the traditional relationship will reassert itself. If crude has topped out then lower for longer will remain the theme for both bond yields and breakevens. 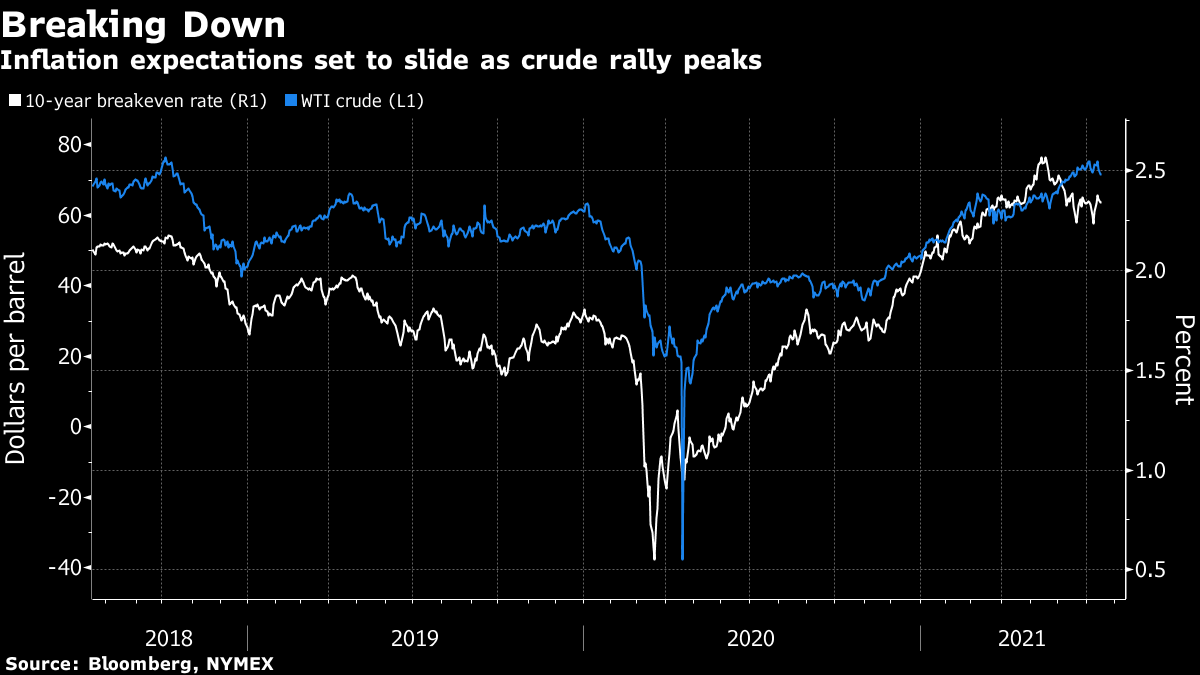 Garfield Reynolds is a markets editor for Bloomberg News in Sydney.

Need to Know: Megacap tech stocks have been on a roll. They could thrive even if interest rates turn higher again.