OPEC+ finally strikes a deal to increase global oil supply. China signals an end to the $2 trillion U.S. stock listing juggernaut. The number of vaccinated Hongkongers doubles in seven weeks. Here’s what you need to know.

OPEC and its allies struck a deal to inject more oil into the recovering global economy. The deal, agreed at a hastily convened Sunday meeting ahead of a long Islamic holiday, allows for monthly supply hikes of 400,000 barrels a day, and puts OPEC+ back in control of the market after two volatile weeks. Ministers from Riyadh and Abu Dhabi made a big show of their continuing friendship and commitment to the alliance, brushing aside the acrimony that caused OPEC+ talks to collapse earlier this month. Prices in New York surged to a six-year high in early July after initial talks failed, before plunging back toward $70 a barrel as traders considered the possibility that the alliance could unravel.

Stocks are set to start the week lower in Asia amid concerns about accelerating inflation. Futures were down in Japan, Australia and Hong Kong. The S&P 500 Index fell for the first week in four. The 10-year Treasury note yield registered a third week of declines, ending below 1.3%, as the increase of more dangerous Covid-19 variants around the world raised questions about the reflation trade. Currencies were steady in early Asian trading.

How Blockchain Could Disrupt More than Digital Assets

For two decades Chinese tech firms have flocked to the U.S. stock market, drawn by a friendly regulatory environment and a vast pool of capital eager to invest in one of the world’s fastest-growing economies. Now, the juggernaut behind hundreds of companies worth $2 trillion appears stopped in its tracks. Beijing’s July 10 announcement that almost all businesses trying to go public in another country will require approval from a newly empowered cybersecurity regulator amounts to a death knell for Chinese initial public offerings in the U.S., according to long-time industry watchers.

The number of Hong Kong residents that are fully vaccinated against Covid-19 topped 2 million on Sunday, doubling in just seven weeks as giveaways helped stoke initially slow demand. Meanwhile, Singapore’s cases hit an 11-month high; Indonesia topped Brazil in reporting the highest number of daily deaths attributed to Covid-19; Vietnam’s capital Hanoi ordered residents to stay at home from Monday and venture out only when “truly necessary”; and police in Bangkok shot tear gas and fired water cannons at pro-democracy activists who marched to protest the Thai government’s management of the nation’s worst coronavirus outbreak.

Last week marked a watershed for technology startups in India, as a record bout of fundraising shifted attention to the world’s second-most populous market, just as investors were becoming spooked by China’s crackdown on internet companies. Food-delivery app Zomato became the nation’s first unicorn to make its stock-market debut, raising $1.3 billion; the parent of digital payments startup Paytm filed a draft prospectus for what could be India’s biggest IPO at $2.2 billion, while retailer Flipkart raised $3.6 billion at a $38 billion valuation Unlike China, many of India’s 625 million internet users are just dipping their toes into the world of video streaming, social networking and ecommerce.

China Evergrande — long described as the poster child for over-indebted but politically-connected Chinese companies — continues to perplex. Bonds and shares of the firm have plunged in recent weeks as Beijing cracks down on excess borrowing by the real estate sector. Evergrande’s founder Hui Ka Yan was called in to meet regulators last month. The company has been issuing short-term commercial paper (known as commercial bills in China) to help plug the gap left by nervous bondholders as it tries to deleverage its balance sheet. 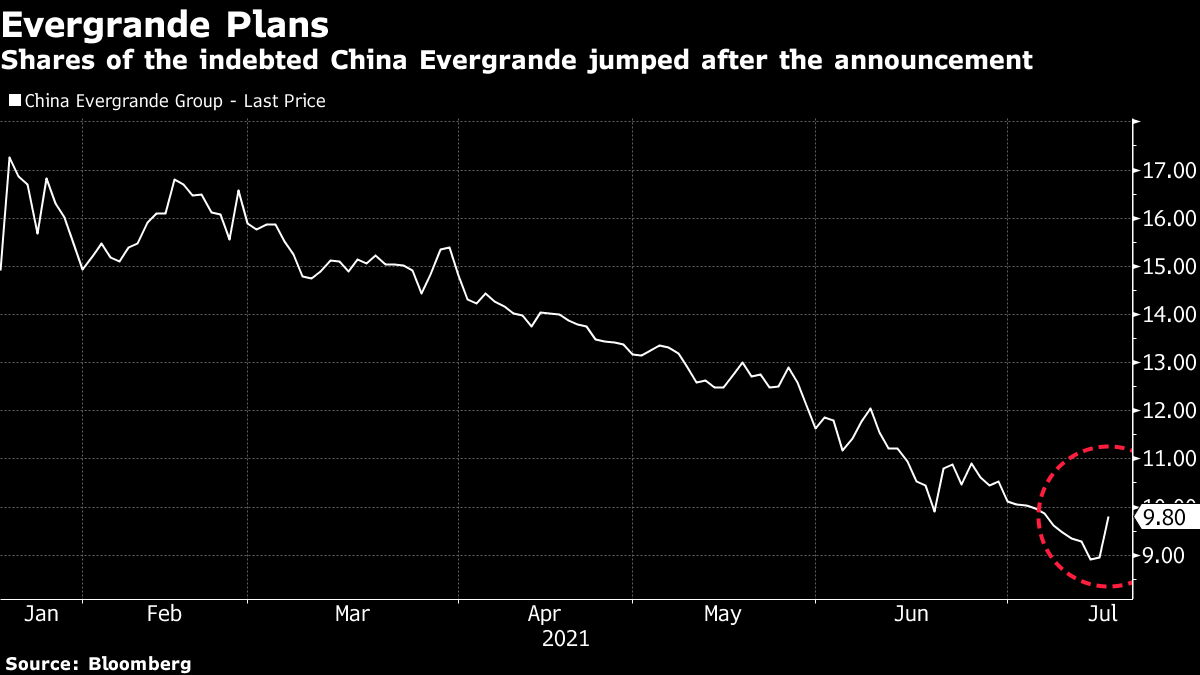 You wouldn’t except a beleaguered property company in the midst of an almighty deleveraging exercise to spend money rewarding its shareholders (including Hui). And yet, on Friday Evergrande said its board would meet on July 27 to consider a special dividend for investors, an announcement which sent its shares up as much as 14%. We still don’t know the exact size of the payout, but it’s an unusual example of capital management and I’ll be interested to see how bondholders react.

Need to Know: COVID-19 cases may cause an S&P 500 correction, analyst says. Buy these stocks in the next dip.

Need to Know: COVID-19 cases may cause an S&P 500 correction, analyst says. Buy these stocks in the next dip.