BHP is considering a multi-billion dollar retreat from oil and gas. Dip buyers give stocks their best day since March. Bezos follows Branson into space. Here’s what you need to know.

BHP is considering getting out of oil and gas in a multibillion-dollar exit that would accelerate its retreat from fossil fuels, according to people familiar with the matter. The world’s biggest miner is reviewing its petroleum business and considering options including a trade sale. The business, which is forecast to earn more than $2 billion this year, could be worth an estimated $15 billion or more. As the world tries to shift away from fossil fuels, BHP wants to avoid getting stuck with assets that may become more difficult to sell. The deliberations are still at an early stage and no final decision has been made.

Asian stocks look set to snap three days of losses after bargain hunters drove U.S. equities to the biggest advance since March. Futures climbed in Japan, Australia and Hong Kong. The S&P 500 almost erased Monday’s slide in a comeback for the reopening trade led by cyclical sectors such as industrials and financials. A rally in Treasuries paused, sending 10-year yields back above 1.2%. It remains to be seen if the recovery in yields has legs amid lingering concerns about the delta virus variant that led traders to pare back bets on a Federal Reserve rate hike. The dollar edged higher against major peers in U.S. hours, advancing for a fourth day. Oil pared gains and Bitcoin held below the $30,000 level.

How Blockchain Could Disrupt More than Digital Assets

Hong Kong lawmakers are set to debate legal changes giving the government greater power to punish so-called doxxing offenses that a coalition of large tech companies says could hurt their ability to provide services. The legal amendments being discussed would create two types of offenses. The most serious, which involves a data disclosure that harms an individual or their relative, would be punishable by five years in prison and a HK$1 million ($128,500) fine. The Asia Internet Coalition, which represents companies like Facebook, Alphabet and Twitter, expressed concerns over the proposal’s absence of a concrete definition of doxxing, the investigative powers it would grant Hong Kong’s privacy commissioner, and the liability for intermediary services, such as Facebook.

Amazon founder and world’s richest man Jeff Bezos and three others pulled off Blue Origin’s first crewed flight to space, a key milestone in the company’s push to make space tourism viable. Blue Origin’s capsule touched down in West Texas after a 10-minute flight in which it reached an altitude of more than 65 miles (105 kilometers). The mission came nine days after U.K. billionaire Richard Branson flew to space on a Virgin Galactic aircraft. Both companies have plans to entice customers to pay big money for a unique travel experience. Despite their achievements, here’s why the future of space is much bigger than just a handful of billionaires.

Credit Suisse is losing four more senior bankers in the aftermath of scandals involving Archegos and Greensill, bringing the total number of defections to more than 30. Financial-institutions banker Max Mesny will become a partner at Perella Weinberg Partners; David Luwisch, a mergers and acquisitions banker, is moving to Morgan Stanley; managing director Laurence Van Lancker departed to be CFO at Italian gaming company Lottomatica SpA; and managing director William Young is joining Bank of America. The bank has also been shedding staff in the Middle East over a toxic work culture beset by intimidation and bullying.

Yesterday’s chart showing bond yields tracking airline stocks has me thinking about more examples of the way Covid has changed market relationships. Here’s another good example of the trend: the Canadian dollar has been following the fortunes of Carnival Cruise shares. 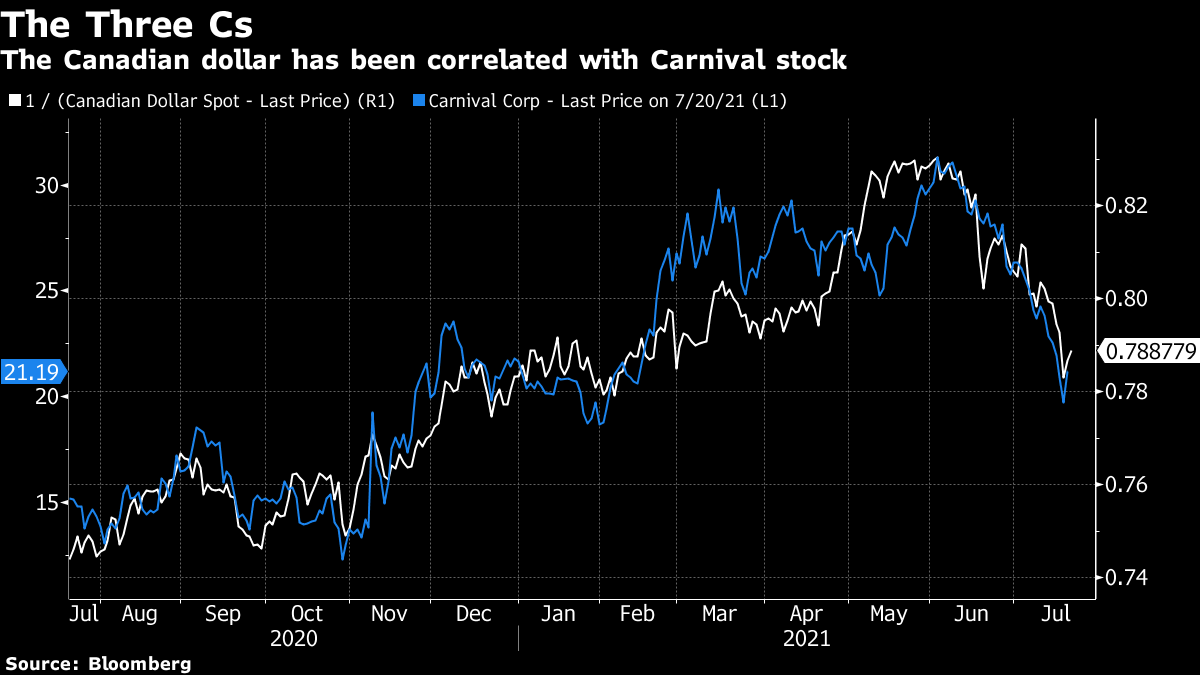 At first glance there shouldn’t be any direct link between the loonie and shares of a cruise line. But Carnival’s stock has become a proxy for reopening after Covid, and the Canadian dollar is a major trading currency reflecting risk sentiment of the overall market — so the two have moved in tandem for the past year. Another way of putting it is that more than a year after the start of the global pandemic, markets are still one big bet on reopening.

Need to Know: Here’s what investors should do as the housing market faces tough times

Need to Know: Ready to cash out some gains on this stock market run? An exit path is about to emerge, says this strategist