China tries to ease market fears after Beijing’s education crackdown. The best and worst places to be as the world struggles to reopen. India’s economy stumbles. Here’s what you need to know this morning.

China’s securities regulator convened a virtual meeting with executives of major investment banks on Wednesday night, attempting to ease market fears about Beijing’s crackdown on the private education industry. The hastily arranged call, which included attendees from several major international banks, was led by China Securities Regulatory Commission Vice Chairman Fang Xinghai. Some bankers left with the message that the education policies were targeted and not intended to hurt companies in other industries. It’s the latest sign that Chinese authorities have become uncomfortable with a selloff that sent the nation’s key stock indexes to the brink of a bear market. Even traders who usually buy the dip are staying away this time.

Asian stocks look set to rise after the Federal Reserve said more economic progress is needed to start tapering substantial stimulus and as traders weigh efforts by China to restore market calm there. Futures rose in Japan, Australia and Hong Kong, where traders are waiting to see if equities will rebound from steep losses sparked by China’s crackdown on private enterprises. Yields on longer-term Treasuries and a gauge of the dollar dipped following the Fed meeting. Fed officials discussed how to go about scaling back bond buying when the time comes, but no decision on timing has been made. Oil advanced as declining stockpiles of U.S. crude signaled healthy demand during the nation’s summer driving season and Bitcoin traded around $40,000, holding this week’s recovery.

CleanTech: It’s All About Scale

The U.S.’s reign as the best place to be in the Covid-19 era, according to the Bloomberg Covid Resilience Ranking, was short-lived. Its vaccination drive has plateaued and cases, fueled by the delta variant, surged anew in July, triggering renewed restrictions in some parts of the country. Norway is now the best place to be, while Indonesia sits at the bottom of the table. Check out the rest of the list here. Meanwhile, Singapore is aiming for a feat no country has achieved so far — to reopen to the world and emerge from the pandemic with a death toll still in the double digits; the AstraZeneca vaccine doesn’t raise the risk of a rare blood clotting disorder after a second dose; and an outbreak in China’s Nanjing is testing the country’s aggressive containment efforts.

India’s economy showed signs of cooling in June as the slow easing of localized lockdowns hurt activity, a factor likely to encourage monetary policy makers meeting next week to consider keeping interest rates at record lows to foster a durable recovery. Contractions in both manufacturing and services sectors, which contribute more than two-thirds of India’s gross domestic product, pulled the needle on an overall activity indicator to 5 from 6, a level not seen since February and the first downward shift since May 2020 data. The gauge uses a three-month weighted average to smooth out volatility, and a move left signifies loss of momentum.

China dispatched a veteran diplomat known for pushing back against Western criticism to serve as its next ambassador to the U.S. Qin Gang, 55, who most recently served as vice foreign minister, arrived in the U.S. to fill the post recently vacated by long-time ambassador, Cui Tiankai. Qin will be responsible for shepherding relations between the world’s two largest economies as they lock horns on issues ranging from trade to technology, human rights and the South China Sea. U.S. President Joe Biden still hasn’t installed an envoy in Beijing.

Should investors have known China’s crackdowns were coming? There are plenty of examples on social media of old policy statements and speeches that seem to hint at the recent moves, which now include banning private tutoring firms from making profits, setting guidelines for workers on food delivery platforms like Meituan’s, the cybersecurity review of Didi and the record fine for Alibaba.

Some of the most prominent instances include:

Of course those statements might be construed as being at odds with other things the party has said or suggested over time, including “ unwavering support” for private companies or Xi’s 2013 statement that market forces would have a “decisive” role in allocating capital.

But more broadly, it feels like the latest moves should encourage investors to pay a lot more attention to Party speak. You might not be able to predict exactly how local officials will implement Xi’s broad directives, but you can at least try to pick out repeated slogans (such as “disorderly expansion”) that might become important later on. 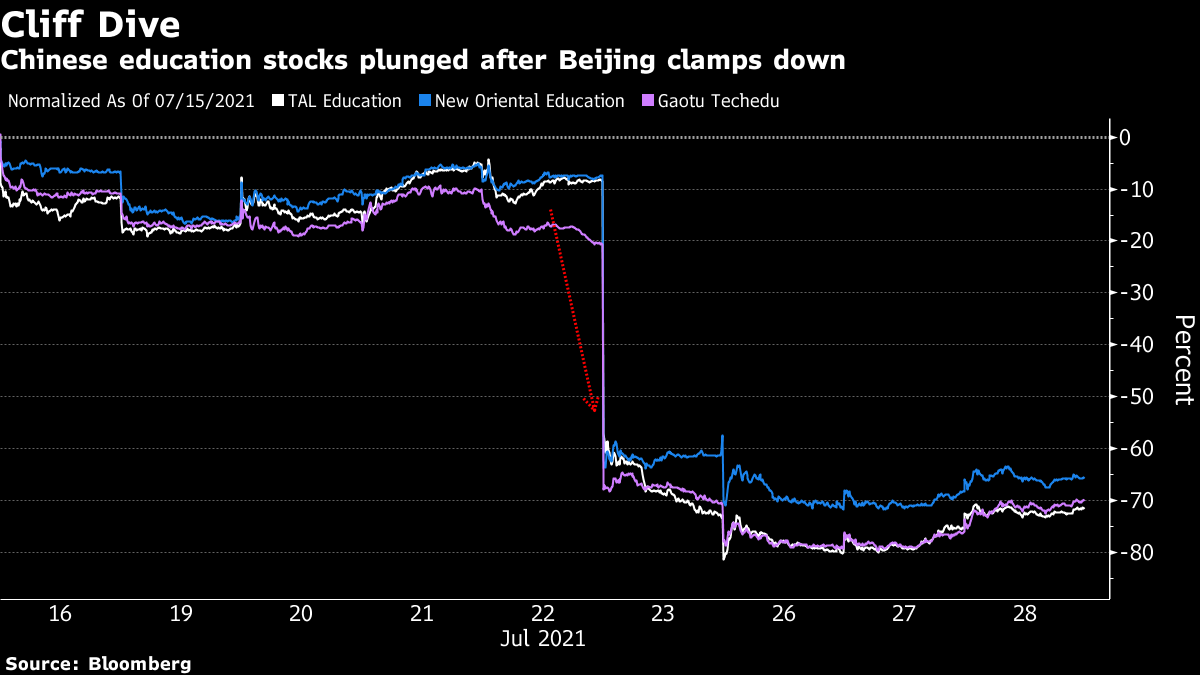 OP: The Dog Days of Summer