Amazon missed quarterly sales estimates for the first time since 2018. The world’s biggest e-commerce retailer reported sales and gave a forecast that fell short of expectations, sending its shares down about 7% in extended trading. The pandemic’s online boom is slowing down as consumers revert to old habits like traveling and dining out. Investors overlooked better-than-predicted profits and a strong performance in the advertising business and cloud unit. U.S. equity futures slid, too.

UniCredit said it started talks to buy Banca Monte dei Paschi di Siena, the world’s oldest bank, opening a path to the Italian government’s favored solution for the long-troubled lender. Talks with UniCredit for a possible takeover were halted earlier this year amid a government reshuffle and a change in UniCredit’s CEO. The talks continue an uptick in merger activity among Italian banks, following Intesa Sanpaolo’s takeover of smaller rival UBI Banca last year. At the same time, it underlines the lack of action on a cross-border basis in Europe.

Atlantis, The Royal Residences Dubai is an unparalleled residential address located on the crescent of The Palm next to Atlantis, The Palm. A new iconic landmark, where the sea meets the sky, the
235-apartment building is part of the larger Atlantis The Royal Resort.

Trevor Milton, the 39-year-old founder of U.S. electric vehicle-maker Nikola, was charged with making false statements to investors, such as that the firm had a prototype of a “fully functioning” semi-truck (like an articulated lorry) and that it was making its own batteries and other key components in-house. At one point last year Nikola’s shares were up more than 600%. They fell 15% Thursday. Milton pleaded not guilty, and a judge freed him on $100 million bail secured by two properties he owns in Utah.

Price increase concerns are a reality in Europe’s largest economy, with Germany’s inflation rate jumping to the highest level since 2008 as coronavirus restrictions were lifted and the economy reopened. While prices are perhaps being boosted temporarily by special factors like a reversal of last year’s sales-tax cut, the data may fuel the debate about whether policy makers need to start removing stimulus faster than anticipated. Euro area inflation is coming up later.

European stocks are set to follow those in Asia lower, where concern over China’s crackdown and growing coronavirus cases is weighing on sentiment at the end of the week. It’s another busy day of earnings across Europe, where miner Glencore, banks Natwest and BNP Paribas, British Airways-owner IAG and luxury group Hermes all report. L’Oreal’s sales recovered as the easing of pandemic restrictions worldwide led consumers to use more make-up. In the U.S. it’s a quieter day for reports, with consumer goods group Procter & Gamble, oil firm Chevron and machinery-maker Caterpillar among the highlights.

With the dog days of summer upon us, global risk assets now face what has traditionally been one of the rockiest periods of the year. Over the last 10 years, U.S. shares have retreated in August and September, and international ones have been pretty much slammed. The MSCI World ex-U.S. Index has fallen 1.6% on average in August and 0.7% in September, according to data compiled by Bloomberg. The figures are worse for emerging-market shares, down 2% and 1.4% respectively. On the other side of the ledger, havens have shown strength over the last decade with a gauge of Treasuries climbing on average in August and the dollar posting modest gains before rocketing higher in September. Despite the China-driven selloff this week, global stocks look set for a solid July with the MSCI AC World Index up over 1% — its sixth month of gains. History suggests it could struggle to mark a seventh. 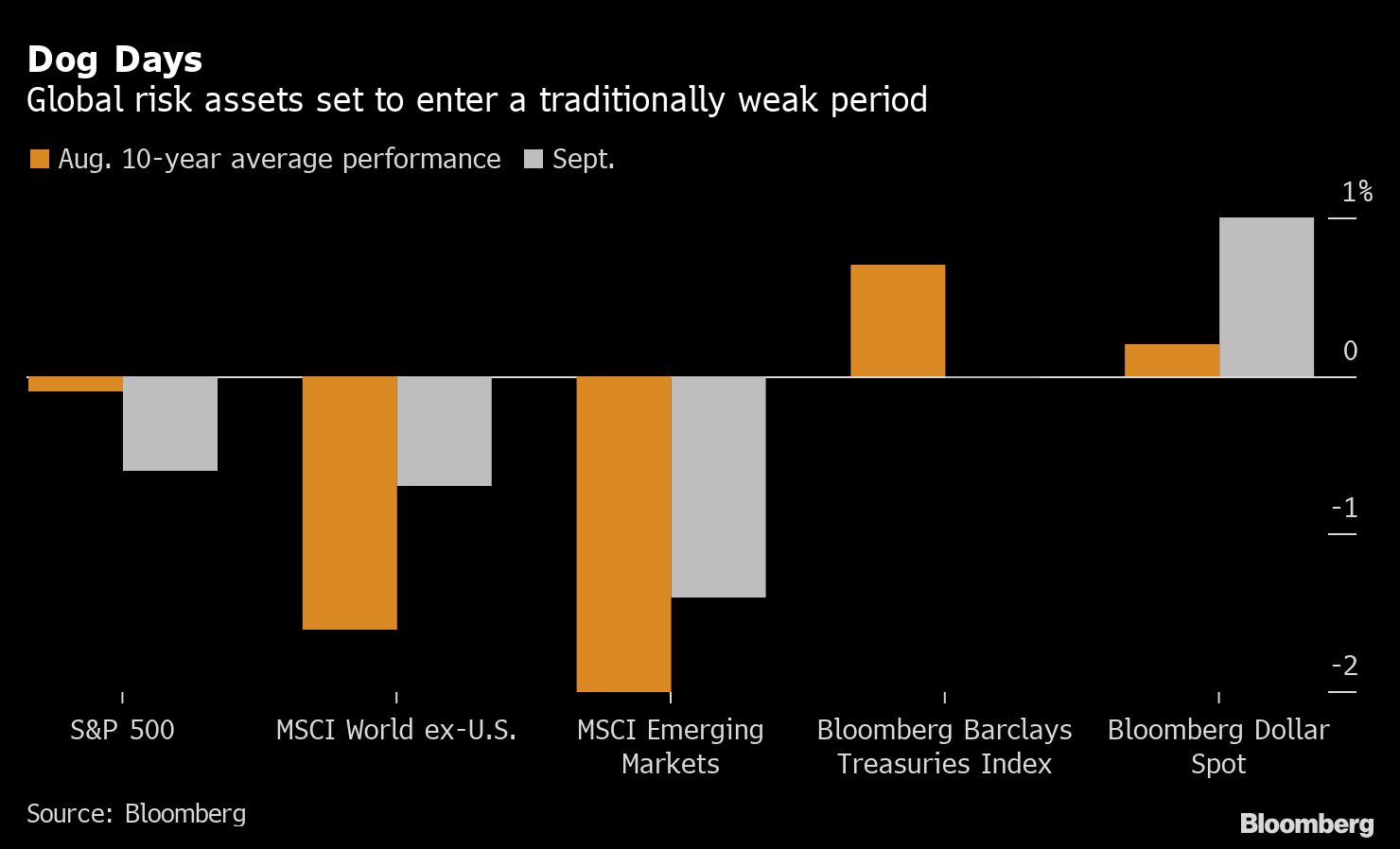