Bitcoin is nursing losses after plunging amid El Salvador’s troubled rollout of the cryptocurrency as legal tender. The virtual coin is down about 10% against the dollar since the start of yesterday’s session, with the selloff also having swept across tokens such as Ether and Dogecoin. Some investors likely bought in anticipation of the Latin American nation implementing its new law and then went on to “sell the fact,” one analyst said.

The U.K. is set to raise taxes to help trim pandemic-related budget deficits, an issue that will probably dominate policy debate across the world in the coming years. A 12 billion-pound tax grab — via an increase to National Insurance — is due to be voted on later. If approved, Chancellor of the Exchequer Rishi Sunak, of the traditionally tax-cutting Conservative party, will preside over some of the highest levels of taxation in British history.

The Taliban’s new cabinet includes the leader of a U.S.-designated terrorist organization. Sirajuddin Haqqani — the head of the Haqqani Network — will serve as acting interior minister, with the appointment potentially complicating any moves by the U.S. to cooperate with the Taliban. For now, the task of convincing the world that the Taliban has changed falls to Mullah Abdul Ghani Baradar, named as deputy prime minister.

Three private equity giants are competing for German online pet food retailer Zooplus. It confirmed yesterday that it’s in talks with buyout firms KKR and EQT over a potential counteroffer to the 2.8 billion-euro bid from Hellman & Friedman. The pet-care market has boomed over the past two years as stay-at-home workers adopt furry friends.

European stock futures are pointing lower following a mixed session in Asia, while the U.S. session was weighed on by potential growth concerns. Retailer Halfords and shoemaker Tod’s are among the firms updating. The Handelsblatt Banking Summit is kicking off, with Deutsche Bank boss Christian Sewing and Santander chair Ana Botin among speakers. In the U.S., so-called “apes” will watch for meme stock Gamestop’s report, while opening statements are expected in the trial of former Theranos founder and onetime Silicon Valley darling Elizabeth Holmes.

And finally, here’s what Eddie is interested in this morning

Traders have had time to digest disappointing U.S. jobs growth, but we’re still no clearer on where that puts us in thebusiness cycle. Hiring slowed, but were companies simply struggling to attract workers? If so, the outlook for growth and inflation is more bullish. And that’s certainly what recent job-openings data suggest. 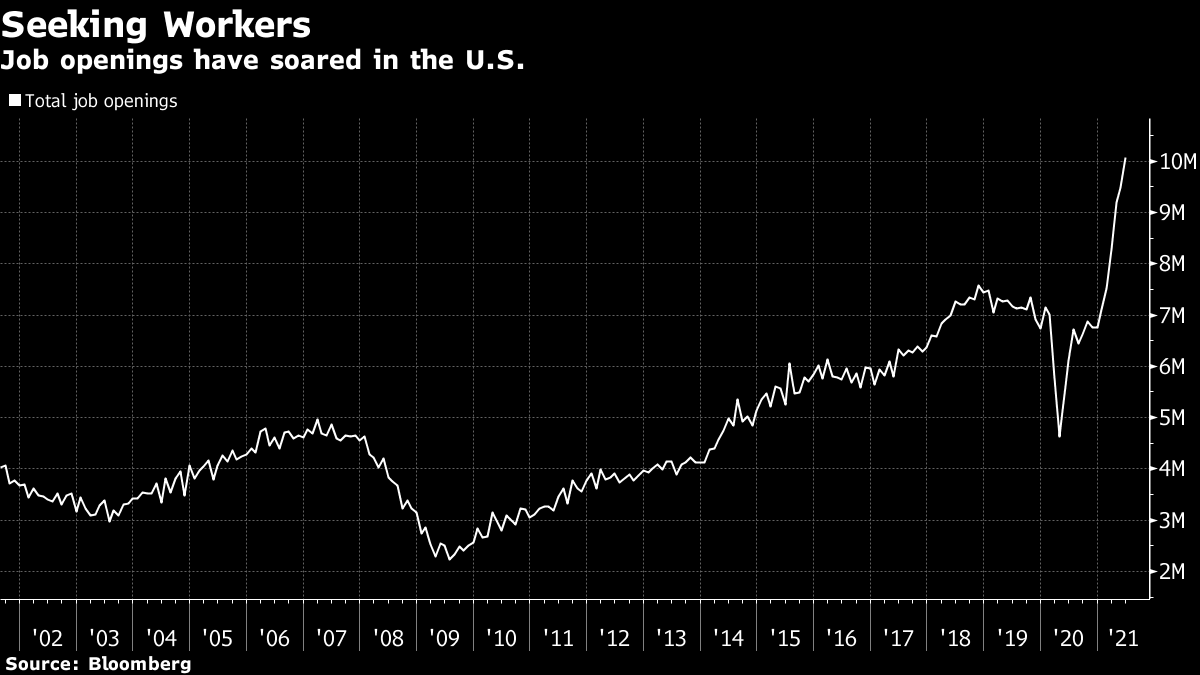 One hold-over of global lockdowns is friction in the labor market. And it’s natural to expect that challenges will emerge when Western economies are growing at rates unprecedented in modern times. Unemployment in many economies remains high while demand for workers is also elevated. The types of jobs that are open may not match the skills and aspirations of job seekers, or the openings may be in the geographically “wrong” place. A study of such frictions won Dale Mortensen the 2010 Nobel Memorial Prize. The sources of mismatches are hard to capture in numbers. Therefore, traders seeking to position for inflation expectations may find anecdotal data, like the Federal Reserve’s Beige Book of economic conditions coming on Wednesday, to be better indicators.

Need to Know: There’s an ETF sending one market haywire. A hedge-fund pro says bitcoin-like gains may come next.