U.K. Prime Minister Boris Johnson promised to find a solution to Brexit’s Northern Ireland Protocol, a sign that a compromise will be reached with the European Union in a dispute that had threatened to spiral into a trade war. Unlike the rest of the U.K., the province remained inside the EU single market for goods, meaning products arriving from the rest of Britain are subject to customs formalities. In an interview with Bloomberg, Johnson also hinted at eventual tax cuts for U.K. businesses, even as his chancellor Rishi Sunak prepares to hike taxes in April to cover health and social care spending. 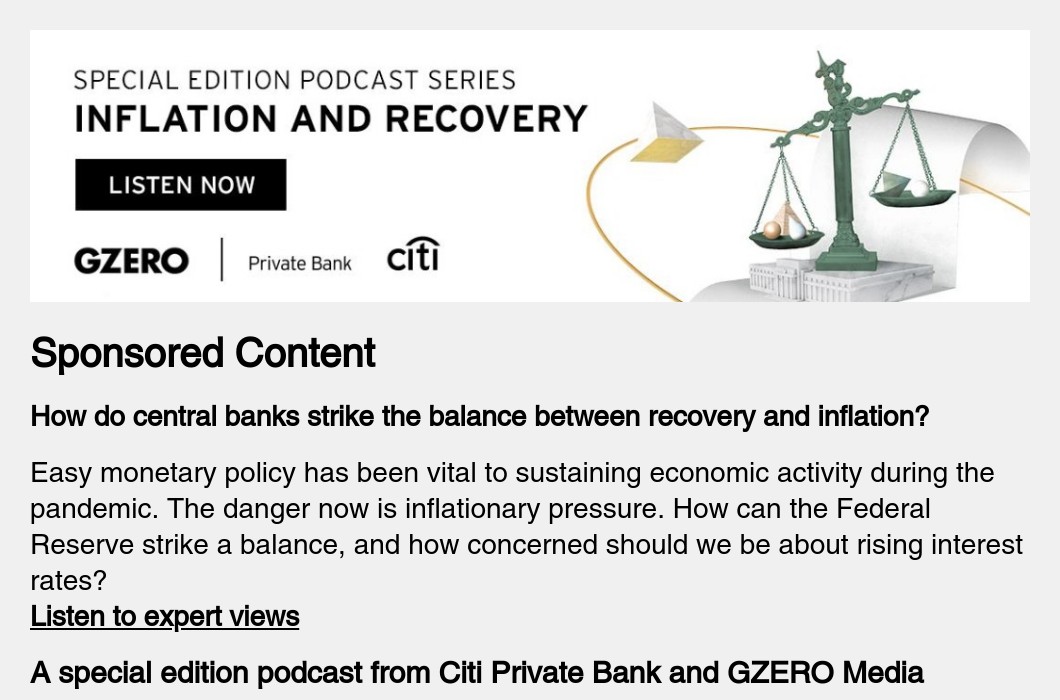 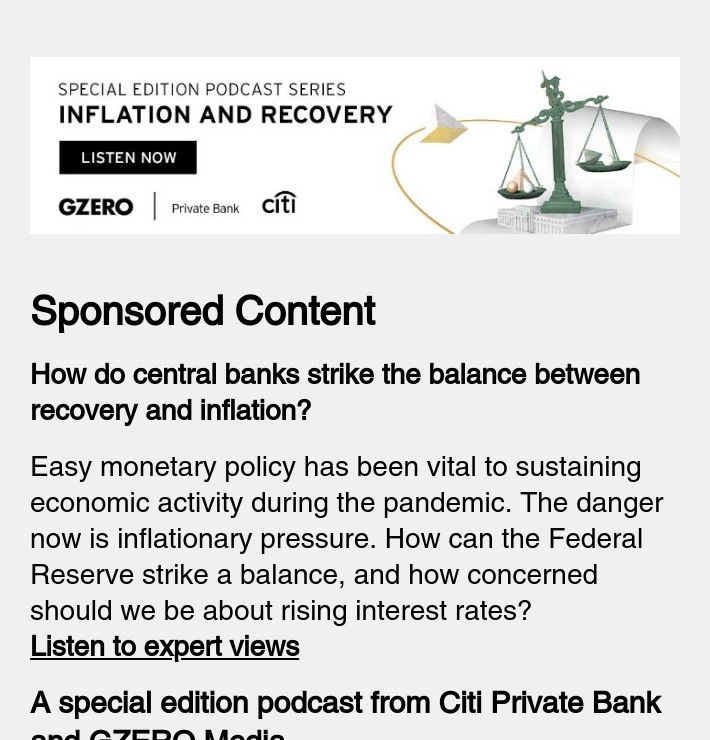 Goldman Sachs analysts raised their forecast for benchmark European gas prices by 70% as tighter-than-expected supplies from Russia worsen the specter of shortages this winter. Gazprom’s exports to its main markets fell in the first two weeks of October to the lowest since at least 2014 for the time of year, as domestic demand absorbed most of the production gains. The results of auctions for pipeline capacity in November gave no indication that Russia is planning to boost shipments to Europe.

Apple announced a revamp of its MacBook Pro lap tops last night, revealing new home-grown processors that are meant to replace Intel’s chips that have powered its high-end computers since the mid-aughties. Last year, Apple started transitioning its low-end Macs to its own M1 Apple Silicon chip. The new chips, however, are a bolder stroke, aiming at far outclassing Intel’s highest-performing products. At the event, Apple also unveiled a new generation of entry-level AirPods, which will be water resistant.

Germany will let its state of emergency expire on Nov. 25 as Covid’s threat to vaccinated people is only moderate, German media reported, citing comments by the country’s health minister. This would mark a step towards normality after almost 19 months, though the minister warned that hygiene rules in indoor spaces will remain necessary. “As far as we can tell, a return to normal will only become possible in spring next year,’’ he is quoted as saying.

As we enter peak 3Q earnings season, get ready for Danone and Ericsson this morning. Investors are likely to focus on Danone’s brand-new CEO, and in Ericsson’s case, its gains in 5G market share. Gucci and Balenciaga owner Kering is expected after markets close, while in the U.S., heavyweights Netflix, Johnson & Johnson and Procter & Gamble are reporting. ProShares plans to launch the first Bitcoin-linked ETF on the New York Stock Exchange today, although you may be better off just buying the cryptocurrency itself. Finally, Hungary’s central bank is set to hike its benchmark rate by 15 basis points today, the same pace as last month.

Global supply-chain shortages will inevitably swing to a glut, putting a swathe of the corporate sector at risk of earnings downgrades and share price pressure. The ongoing earnings season is being monopolized by the broken global supply chain, with management explaining the impact of long lead times, parts shortages, higher shipping costs and raw material price rises. On the plus side, profits are solid because demand is robust and order backlogs strong but there is little data to show how much of this is down to over-ordering to bolster depleted inventories, build a buffer against future shocks, front-run shortages and dodge expected price rises — factors which will eventually lead to a supply-demand chasm. A good (if admittedly exaggerated) proxy is what happened to the share price and earnings estimates of the world’s biggest maker of rubber gloves since the pandemic. For Malaysia’s Top Glove, both soared as demand skyrocketed before an inevitable slump as customers over-ordered, inventories replenished, competition emerged and sales normalized. While the magnitude of these moves is unlikely to be matched by many (forward earnings estimates rose by some 1500% from March to December 2020 before collapsing almost 80%), the pattern will be — especially for the world’s manufacturers, industrial firms, raw materials companies and retailers most impacted by the current supply-chain chaos. Remember stock markets traditionally look six- to nine-months ahead, a time-frame when the logistics crisis should have eased and a ‘real’ supply-demand gap become more evident. Investors haven’t even begun to account for the risk to earnings and share prices when the inventory shortage turns into a glut. 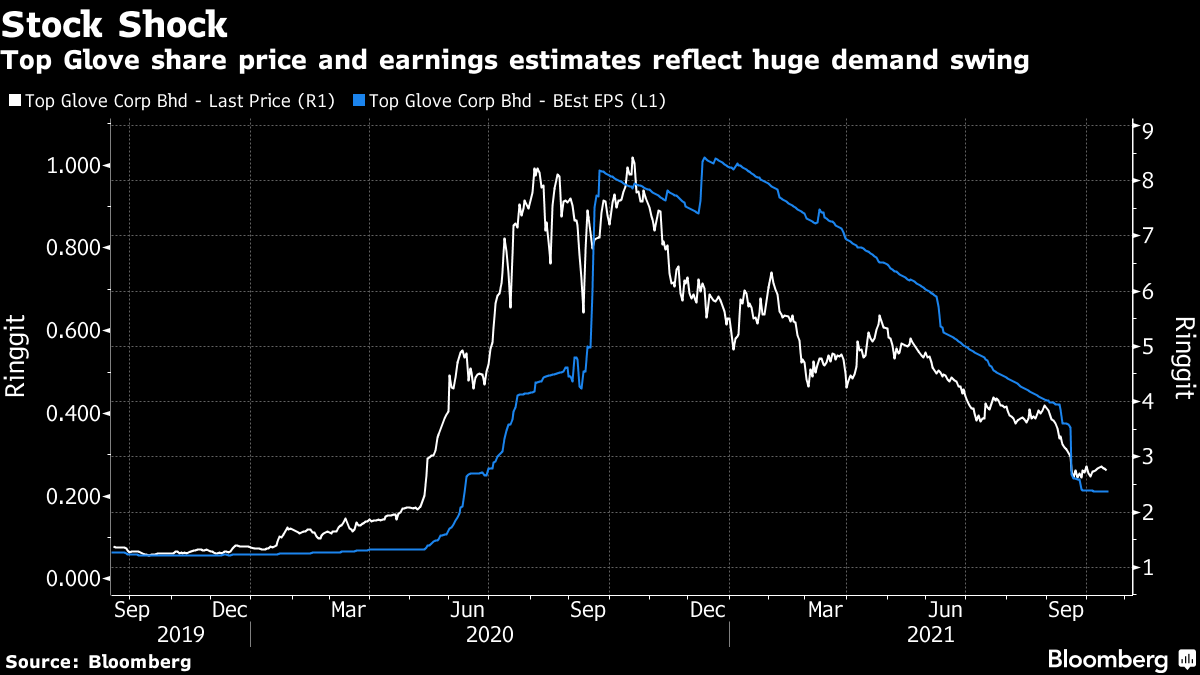