Good morning. The U.S. election is keeping traders on edge, China is cracking down on Ant Group and the U.K. parliament will vote on lockdown measures. Here’s what’s moving markets.

President Donald Trump’s strong showing across the Sun Belt in early results appeared to significantly shrink Democratic nominee Joe Biden’s path to the White House, with Trump victorious in the key battleground state of Florida. Elsewhere, the president won Ohio and Biden won Minnesota, states that each candidate had sought to take from the other but wound up politically unchanged from 2016. “We believe we’re on track to win this election,” Biden said on stage in Delaware, while Trump said on Twitter “we are up big,” adding that he’ll also be making a statement. Battleground states including North Carolina, Georgia, Pennsylvania, Wisconsin and Michigan remain undecided. Follow Bloomberg’s live blog here.

Markets are in limbo after a long night for traders, with U.S. equity futures volatile ahead of a potentially long and disruptive vote count. Nasdaq 100 contracts rose fast enough to trigger an exchange halt that pauses especially rapid swings. European futures are fluctuating, while away from equities, gold fell and oil pared gains as tight races in battleground states shook initial faith in a decisive outcome. Treasuries jumped and the dollar climbed.

Tuesday’s shock suspension of Ant Group’s $35 billion initial public offering is just the beginning of a renewed campaign by China to rein in the fintech empire controlled by Jack Ma. Authorities are now setting their sights on Ant’s credit platforms that funnel loans from banks and other financial institutions to millions of consumers across China, according to people familiar with the matter. Ant has faced scrutiny in Chinese state media after Jack Ma criticized regulators for stifling innovation, and for their policies toward the young. Ma’s Alibaba Group Holding, an Ant shareholder, saw its own stock slump after the suspension news.

U.K. Prime Minister Boris Johnson will hope to push fresh coronavirus lockdown rules through parliament later, facing down rebels in his own Conservative Party who reject the measures. Graham Brady, chairman of the influential 1922 committee of rank-and-file Tory lawmakers, and his deputy, have said they’ll vote against the regulations, though the rules appear certain to go through because the opposition Labour party is set to back them. England is due to enter a second lockdown on Thursday.

Save the date | Join Bloomberg on Nov. 5 for an exclusive virtual event with Volkswagen CEO Herbert Diess to discuss his plans to transform the world’s largest carmaker and build the biggest electric-car fleet globally. Get the details and sign up here.

While early post-election trading has seen some decent price swings, at least in terms of asset classes flipping between gains and losses, the more interesting moves have been in Treasuries. Benchmark yields jumped first through 0.9% on a surge of reflation bets before slumping back through 0.8% as initial results suggest a closer contest than might have been predicted. The closer yields move to 1%, the more the chatter will grow about when the Federal Reserve will likely step in to push them down again. That — and the paltry yields available in many non-U.S. markets — should lead to a decent amount of buying interest at those levels, as we got a first glimpse of on Wednesday. Meanwhile, yields found a floor just around their 200-day moving average, which was breached a few sessions ago for the first time since 2018. That suggests an area where sellers are happy to make a stand. Treasuries will likely remain under pressure whoever ends up the winner as a stimulus bill is expected to come sooner rather than later. But if 10-year yields move back up toward 1%, it will take a brave bond bear to go toe-to-toe with the Fed. 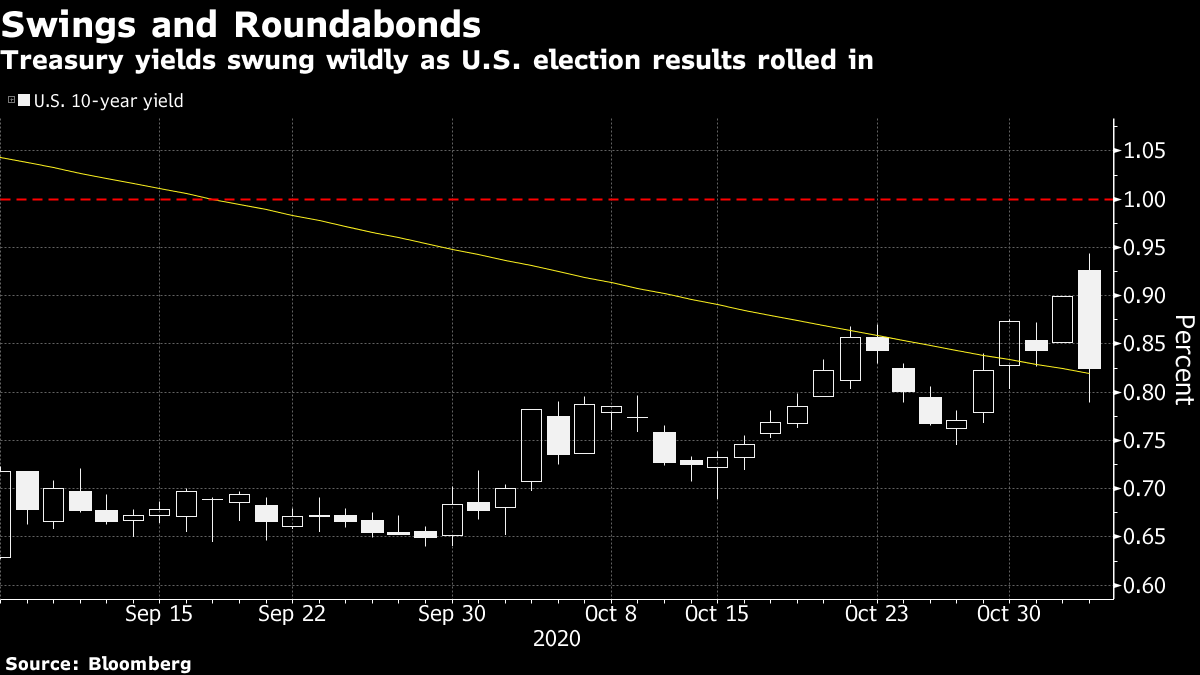