Nearly but not quite

Joe Biden is on the brink of claiming victory in the election, holding 264 of the 270 Electoral College votes needed, according to the Associated Press. He only needs to win one more outstanding state. President Donald Trump’s team have already asked for a recount in Wisconsin with his campaign attempting to stop counting in states where he is ahead, while demanding counting continues in states where he is behind. Trump needs to win every outstanding state to claim a second term. In the Senate and House races, Democrats have a reduced majority in the lower chamber and may have failed to gain control of the Senate.

Economists expect no major policy changes from the Federal Reserve when the latest monetary policy decision is announced at 2:00 p.m. today. Chair Jerome Powell would probably rather skip having today’s post decision press at 2:30 p.m. with the election result remaining in the balance. Earlier today the Bank of England announced a bigger-than-expected 150 billion pounds ($195 million) round of quantitative easing to help the economy as the U.K. enters further Covid restrictions and the post-Brexit relationship with the EU remains uncertain.

Initial jobless claims probably slipped further to 735,000 last week, according to the median estimate from economists polled by Bloomberg, with continuing claims falling to 7.2 million. The data is the last look at the U.S. labor market before tomorrow’s payrolls report for October, with 590,000 new positions forecast to have been added in the month. Yesterday’s private employment number from the ADP showed an increase of 365,000 in the month, well below the media projection of 643,000.

Yesterday’s rally in stocks and bonds as results from the U.S. election rolled in is continuing this morning as investors remain confident key elements of the bull market would remain intact. Overnight the MSCI Asia Pacific Index added 2.3% while Japan’s Topix index closed 1.4% higher. In Europe, the Stoxx 600 Index had gained 0.9% by 5:50 a.m. with technology stocks among the best performers. S&P 500 futures pointed to another strong open, the 10-year Treasury yield was at 0.741% and gold was higher.

The European Union cut its growth forecast for next year as a second round of pandemic restrictions in the region risk putting a halt to the recovery. The projection for the U.K. for 2021 was almost cut in half as the Commission based its outlook on the assumption there would be no deal on a post-Brexit trade accord. The virus continues its rapid spread in the U.S. where new cases close to 100,000 yesterday, as deaths and infections worldwide surged. Denmark says it’s found a new strain of Covid-19 that might hamper efforts to develop a vaccine after an outbreak in the country’s mink population triggered a mutation.

Since the voting ended, we’ve gotten a fantastic look at exactly how the market views politics and the economy. 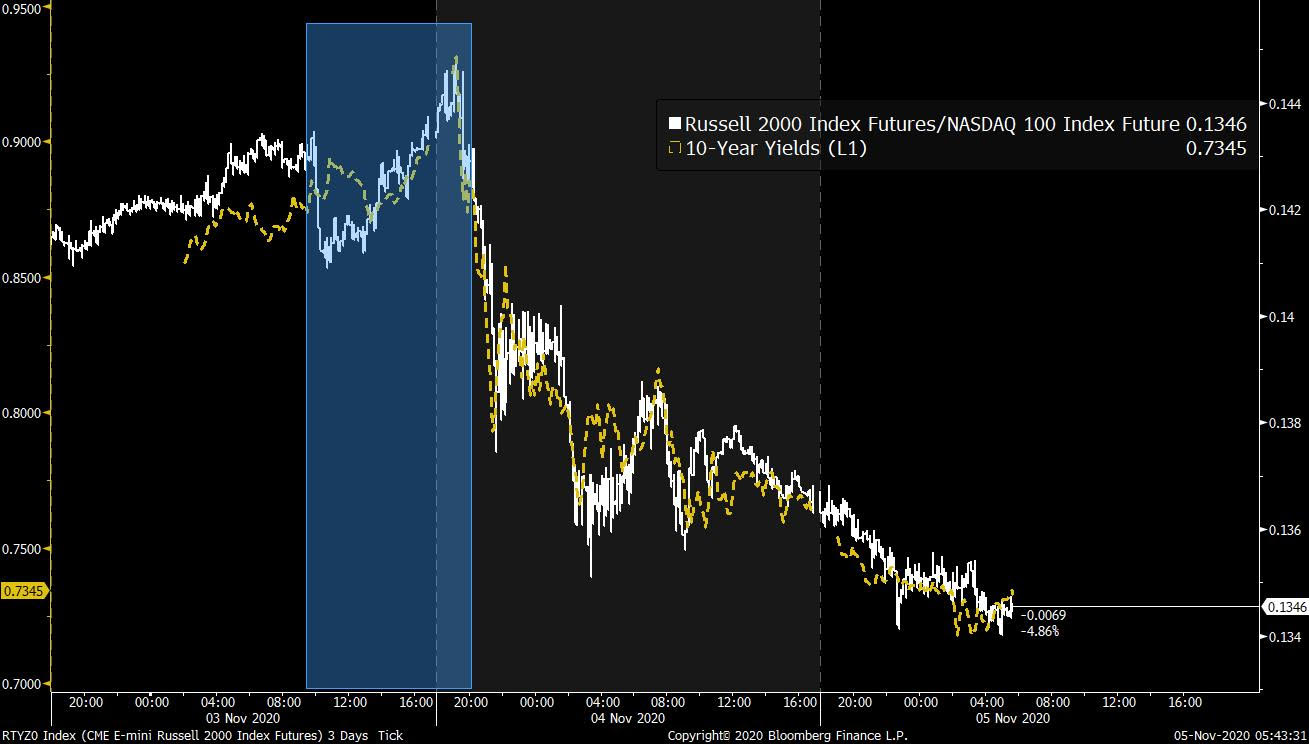 The blue shaded area was in the early periods of the vote counting, when people thought it might be looking like a huge Blue Wave, with Biden winning in a romp, alongside big Congressional majorities. People had visions of a mega stimulus bill coming, hence the rise in interest rates. Alongside that rise, we saw more economically sensitive small caps outperform tech companies. Of course once it became clear that Biden wasn’t going to win Florida and that the race was tight, everything reversed. Yields started to plunge. No big stimulus in the cards. And since then, megacap tech has gone absolutely nuts. Facebook was up over 8% yesterday, just to name one example.

And it makes sense. If economic growth is anemic, investors pay a premium for companies that can grow rapidly in a weak growth environment, which is exactly what we’ve been seeing for years… people piling into huge, secular winners amid slow growth overall.

Of course, this is roughly line with a lot of the pre-election forecasts, that a Blue Wave would catalyze some rotation towards small cap stocks or value stocks or something like that. Still it’s interesting to see the market bear out the speculation. Of course nobody knows for sure what the next several years will actually bring, but the snap reaction of the market gives a clear picture of how investors see the interplay between policy, economic growth, and relative winners.

The world’s most influential leaders will be there. Will you? Click here to join Bloomberg New Economy Forum for a virtual Global Town Hall on November 16-19 and be part of change in real time.