Almost a year into the coronavirus outbreak, some good news. One of the Covid-19 vaccines that was accelerated into trials earlier this year seems to work. The experimental shot, developed by Pfizer and German biotechnology firm BioNTech, appears more than 90% effective in stopping Sars-Cov-2 infections, the companies said Monday. A vaccine at that level of effectiveness, administered widely, is enough to break chains of infection. Pfizer shares rose as much as 15%, while BioNTech American depositary receipts surged as much as 24%. The companies have agreed to supply deals with the U.S. and with other countries, but it's likely that front-line medical and essential workers, and at-risk groups, will receive a shot first. The global economic outlook could materially change for the better following Monday’s promising results.

Asian stocks looked poised for gains Tuesday after the S&P 500 Index closed at a two-month high amid strong volume following Pfizer's news. Bonds and other haven assets tumbled. Futures indicated gains of at least 1% in Japan, Australia and Hong Kong. The Nasdaq 100 fell as investors rotated out of defensive technology names into shares depressed by the economic impact of lockdowns. Still, the broader U.S. stock gauge pared gains on concern that lawmakers will pass a smaller stimulus package. Elsewhere, yields on 10-year Treasuries soared to the highest since March. Oil surged, while gold, the Japanese yen and the Swiss franc slumped. The dollar rose.

The Next Wave for Cloud Computing?

Cloud computing technology has been central to advances in online productivity and mobility for more than a decade. Despite an acceleration in recent months, we believe segments of this emerging theme are just getting started. Explore what could power the next wave of growth in the cloud – and why investors may want to take notice.

The U.S. is imposing sanctions on four more people in its continuing response to China’s crackdown on dissent in Hong Kong, the Treasury Department announced Monday. Earlier, the U.S. suspended its extradition treaty with Hong Kong, ended reciprocal tax treatment on shipping with the former British colony, and sanctioned senior officials who oversee Hong Kong, including the city’s leader, Carrie Lam. The moves are part of the administration’s efforts to pressure China over the imposition of a national security law that has led to charges against pro-democracy activists. They follow up on an executive order to end preferential trading treatment for the city. Meanwhile, President Donald Trump fired U.S. Defense Secretary Mark Esper in a tweet on Monday for not supporting him sufficiently.

Joe Biden’s election victory means the U.S. will join a growing list of nations committing to net-zero emissions. That leaves Australian Prime Minister Scott Morrison even more isolated as the leader of one of the few developed nations yet to make the pledge, which big fossil-fuel importers such as Japan, China and South Korea have already agreed to. Morrison is showing no signs of turning, even as Australia remains one of the world’s biggest per-capita carbon polluters. Meanwhile a 23-year-old is suing Australia over global-warming debt risk, as activists around the world increasingly use courts to push for climate action.

China Merchants Bank and other state-backed lenders have emerged as the biggest winners from new regulations that derailed Ant Group's massive stock listing, as China aims to level the playing field between fintech giants and traditional banks. Chinese banks, trading near record low valuations, rallied after financial regulators last week proposed new rules to curb the rapid growth and leverage at the nation’s more than 200 micro-loan lenders. Merchants Bank soared 16% in Hong Kong this month, its biggest six-day advance in more than five years. Other Chinese lenders gained, including Agricultural Bank of China, while Alibaba Group, an affiliate and one-third shareholder of Ant, lost 1%.

Wouldn't it be ironic if the market reaction to Joe Biden's victory ends up doing more to boost U.S. exports than a four-year trade war with China? Trump's 2016 win sparked a rally in the U.S. dollar that never really went away. In fact, the president's unpredictable battle with China arguably boosted the dollar further by roiling markets and creating safe-haven appetite, further lowering demand for American goods. And even before Covid-19 came along to further skew the balance of trade, the U.S.'s deficit with China had been increasing. 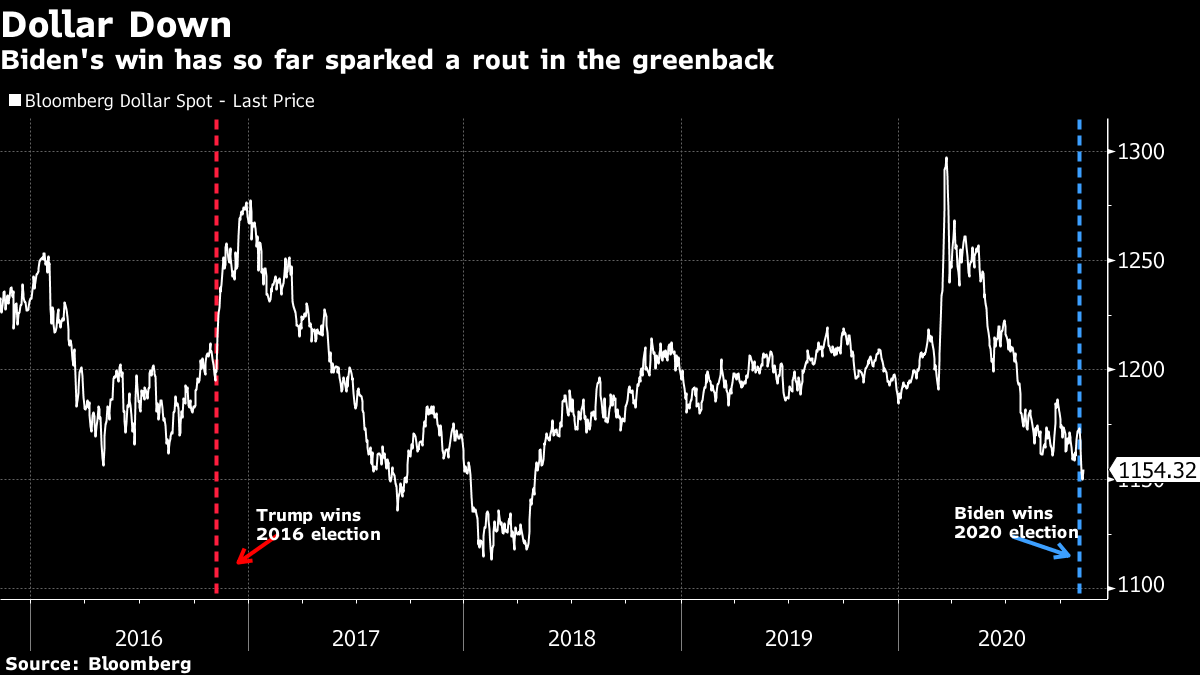 As Brad Setser at the Council for Foreign Relations observes, individual policies tend to dominate "trade narratives" but exchange rates also matter and Biden's win has sent the dollar plummeting and the yuan surging. It's early days of course, but so far the president-elect is already leveling the trade playing field with China without actually having to do anything to level the trade playing field with China.