Xi sends a strong message on Hong Kong. India is in recession. And Trump still has about 10 weeks left to roil markets.

China’s top legislative body has passed a resolution allowing the disqualification of any Hong Kong lawmakers who aren’t deemed sufficiently loyal to the mainland. The city's government then banished four opposition legislators, prompting the remaining 15 in the 70-seat Legislative Council to resign en masse hours later. The message for President-elect Joe Biden is that no amount of pressure will prompt President Xi Jinping to tolerate dissent. This year already, the Trump administration has applied sanctions and ended their preferential trading treatment for Hong Kong in a bid to dissuade Beijing from further eroding the city's autonomy. The move by China is the latest in a long series pressuring opposition lawmakers to align with Beijing.

Asian shares looked set for modest gains after defensive megacap U.S. tech stocks rebounded amid speculation economic recovery will be slow. Futures pointed higher in Japan, Australia and Hong Kong. The S&P 500 rose to the highest since Sept. 2, while the Nasdaq 100 jumped more than 2%. Apple and Amazon.com surged alongside some stay-at-home shares that were hit hard by this week’s selloff. Treasury futures were little changed, with the cash market closed for a U.S. holiday. The dollar advanced, while oil pared earlier gains and gold retreated.

The Next Wave for Cloud Computing?

Cloud computing technology has been central to advances in online productivity and mobility for more than a decade. Despite an acceleration in recent months, we believe segments of this emerging theme are just getting started. Explore what could power the next wave of growth in the cloud – and why investors may want to take notice.

India’s economy probably shrank for a second straight quarter, economists say, pushing the country into an unprecedented recession. GDP contracted 8.6% in the quarter ended September, the Reserve Bank of India showed in its first published "nowcast," which is an estimate based on high-frequency data. The economy had slumped about 24% in April to June. Still, India's vegetable prices — which have kept inflation high — are beginning to cool, helping price growth return toward the central bank’s target band and allowing interest rates to remain lower for longer.

After Biden’s win is certified, Donald Trump will enter the so-called lame-duck phase of his presidency with a capacity for disruption that is formidable. Already, he’s ousted his defense chief and remade Pentagon leadership. Disputes with China, the trade spat with Europe, and the upcoming deadline on U.S. government funding in December all offer the potential for market-moving action. Earlier this week, Secretary of State Michael Pompeo said the Trump administration is “not finished yet” with getting tough on China. Meanwhile, manufacturers there are worried that even under Joe Biden, the U.S. will remain hostile toward the nation.

Although Tencent joined much of China’s internet sector in a $290 billion selloff after Beijing signaled its strongest intentions yet to rein in Big Tech, the social media and gaming giant looks better shielded than its peers. Executives unfurling earnings Thursday will seek to reinforce perceptions Tencent isn’t in the same boat as fintech giant Ant Group, the Alibaba affiliate forced to call off what would’ve been the world’s largest IPO after Beijing tightened its control of online lending. Citigroup and JPMorgan were among brokerages that recommended investors buy Tencent during the sell-off. Speaking of Alibaba, the company posted sales of $75 billion during the world’s largest shopping binge.

What's that thing that people say? You wait for one antitrust crackdown and then suddenly two come along at once? Beijing this week sparked a $290 billion selloff in its homegrown tech stocks after issuing, as Bloomberg reported, 22 pages of vaguely worded edicts designed to root out monopolistic practices in the internet industry. Meanwhile, the European Union escalated an antitrust case against Amazon that could result in potential fines of as much as 10% of the company's annual sales. 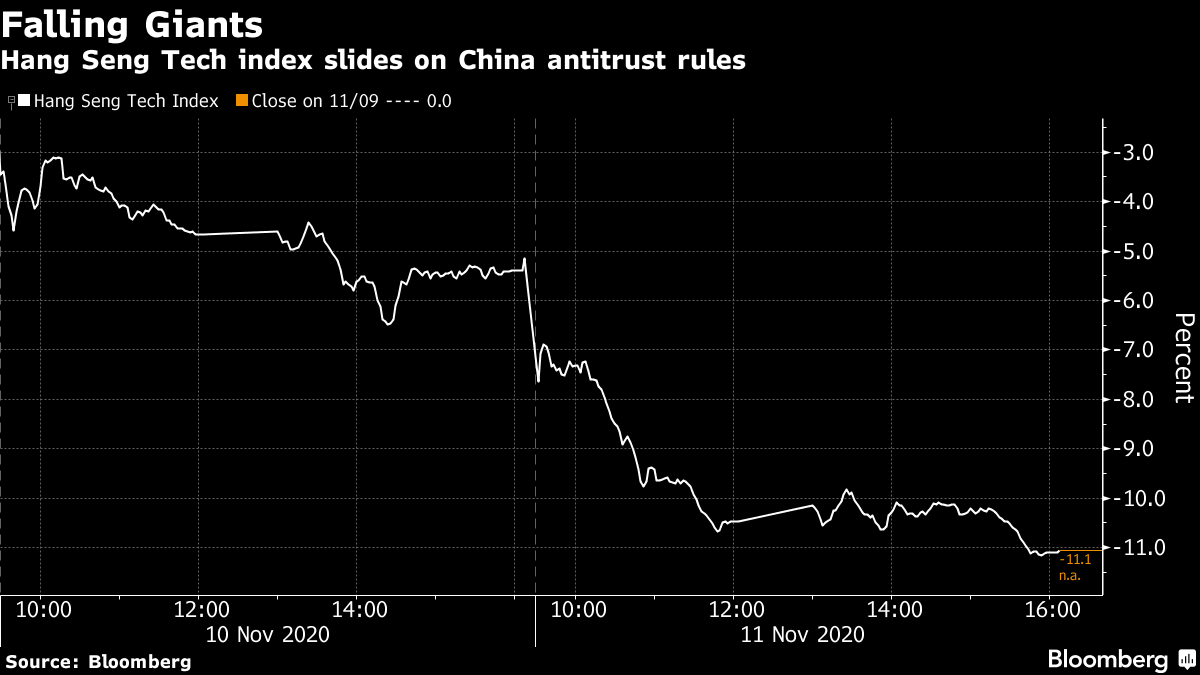 The moves arguably make the U.S. look like the odd one out when it comes to cracking down on the dominance of Big Tech. A House report released last month found that some of the biggest tech companies do hold "monopoly power" in certain businesses, but not much has been done since then. There has been talk that a Democratic administration could push through some sort of antitrust legislation, but many people believe that President-elect Joe Biden won't be able to do much given a split Congress. The question is whether all that action elsewhere makes the new administration more determined to go after Big Tech than ever, and whether it prompts bipartisan support to do so.

Protected: OP: Tech Rotation Not Over

OP: Tech Rotation Not Over