Dominic Cummings, Boris Johnson's chief adviser and the architect of the Vote Leave campaign in 2016, will leave his post by the end of the year, according to people familiar with the matter. The departure will deprive the premier of his most important adviser and strategist, who has wielded huge influence over all aspects of government policy, from its pandemic response to Brexit and economic reform. He is the second key adviser to Johnson to go in the space of a day, after tensions blew up over the way the prime minister’s inner circle operates. Late on Wednesday, Johnson's spin doctor and Cummings ally Lee Cain announced he was standing down.

Three top central bankers warned that market euphoria over a potential Covid vaccine may be premature. The Bank of England's Andrew Bailey called recent vaccine news “encouraging” and said he hoped it would reduce uncertainty but added “we’re not there yet.” The ECB's Christine Lagarde said while it’s now becoming possible to see past the pandemic, “I don’t want to be exuberant.” Jerome Powell of the Federal Reserve said challenging months could be ahead, with a further spread of the disease posing the largest risk to the U.S. economy's "solid path of recovery."

U.S. state and federal election officials, along with experts in the private sector, said in a joint statement that they had “utmost confidence in the security and integrity” of the Nov. 3 vote, as President Donald Trump continues to make unfounded claims of fraud, and key security officials involved in protecting elections leave the administration or expect to be fired. The election "was the most secure in American history,” according to the statement. "There is no evidence that any voting system deleted or lost votes, changed votes, or was in any way compromised."

The Trump administration pulled back from its threat to ban the viral video-sharing app TikTok in the U.S., as the dispute winds its way through the court system and a proposed sale hangs in limbo. For months, the app’s Chinese owner, ByteDance, has faced the prospect of a U.S. ban starting Thursday. But judges have blocked those prohibitions from going into effect. The Commerce Department said it would comply with those court rulings for the time being, even as the government appeals.

This week's sudden surge in global banking stocks has caused consternation in recently calmed funding markets. A JPMorgan report suggested the rally will filter into regulatory scoring for systemic banks which could prompt lenders to pull back from money market activities at the end of the year and lead to a funding squeeze. The report triggered a wave of selling in December eurodollar futures — implying higher expected bank borrowing costs — on Wednesday. Bank share prices are a factor in the complicated regulatory process which determines how much capital lenders need to hold on their balance sheets. Traders' nerves were soothed somewhat when influential Credit Suisse analyst Zoltan Pozsar pushed back against JPMorgan's arguments. To give one example, not even a 50% rally in the U.S. banking giant itself would be enough to trigger increased capital requirements for it, he said. With the MSCI AC World Banks Index up about 9% this week, money market traders are still unlikely to become cheerleaders for a Santa stock rally. 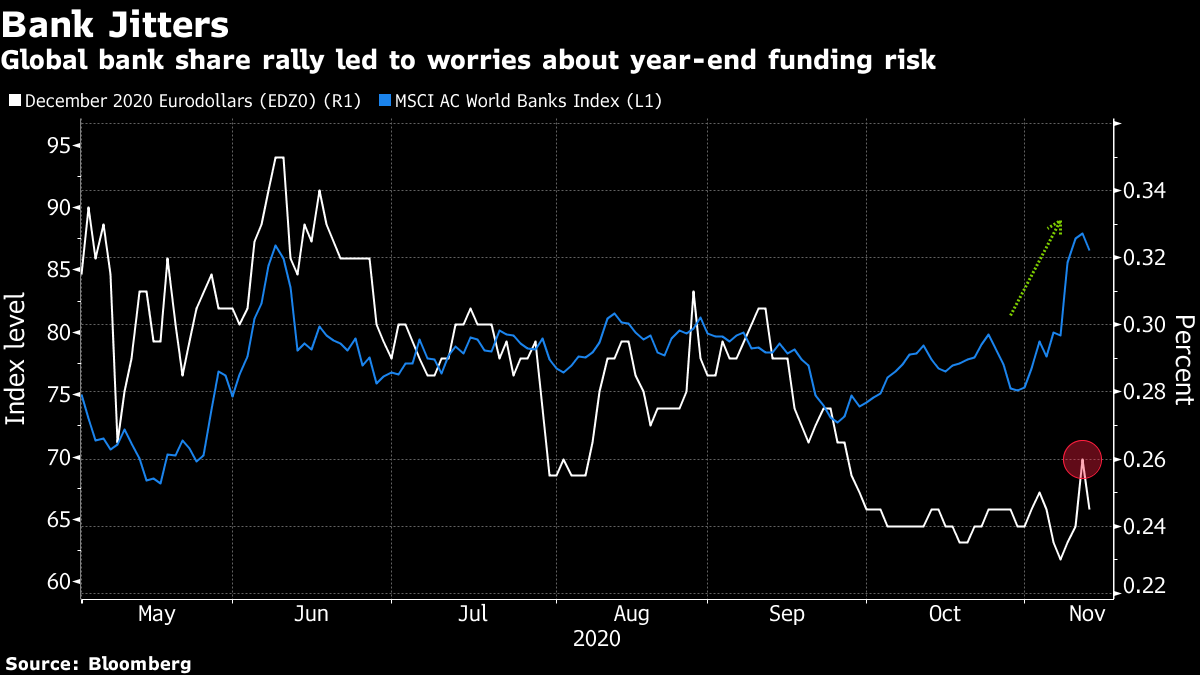