President Donald Trump began a tweet with the words "He won" yesterday, sparking expectations that Trump might be ready to concede the election. While he followed up the posting saying he concedes nothing, people close to the president say he is increasingly aware he cannot overturn the results of the vote. Trump's bluster over the election is unlikely to stop a rush of lame-duck policy moves including further measures against China, selling oil drilling rights in the Alaskan wilderness and taking care of that long-standing shower head problem.

Two coronavirus advisers to President-elect Joe Biden say they oppose a national lockdown, and instead favor targeted measures to stem the pandemic. The number of cases in the U.S. has passed 11 million, with 1 million of those reported last week. British Prime Minister Boris Johnson is isolating after coming in contact with a colleague who tested positive. German Chancellor Angela Merkel plans further restrictions on public and private gatherings. Moderna Inc. and AstraZeneca Plc are expected to report data from vaccine trials soon, while Johnson & Johnson, Novavax Inc., Sanofi and CureVac NV all continue to work on their candidates.

Joe Biden will outline his team's post-Covid recovery plan today, with the program set to push the notion that unemployed people need jobs, not new skills. The approach implies a large round of government spending, something which makes the runoff vote in Georgia critical for success, as that election will decide control of the Senate. Analysts at Morgan Stanley are optimistic about the outlook for the economy, saying a vaccine and increased fiscal support means that investors should "trust the recovery."

The buoyant mood among investors has been helped by the signing of the Asian regional trade deal, good economic news from China and signs Biden will not shut the U.S. economy. Overnight the MSCI Asia Pacific Index added 1.5% while Japan's Topix index closed 1.7% higher. In Europe, the Stoxx 600 Index had gained 0.6% by 5:55 a.m Eastern Time. S&P 500 futures pointed to a strong open, the 10-year Treasury yield was at 0.883%, oil rose and gold was higher.

The virus is raging in the U.S., and there's reason to think that it's creating new problems for an already weakened economy. JPMorgan's card spending tracker has been rolling over lately, and their employment model, based on alternative data, suggests a stall in the labor market in November. 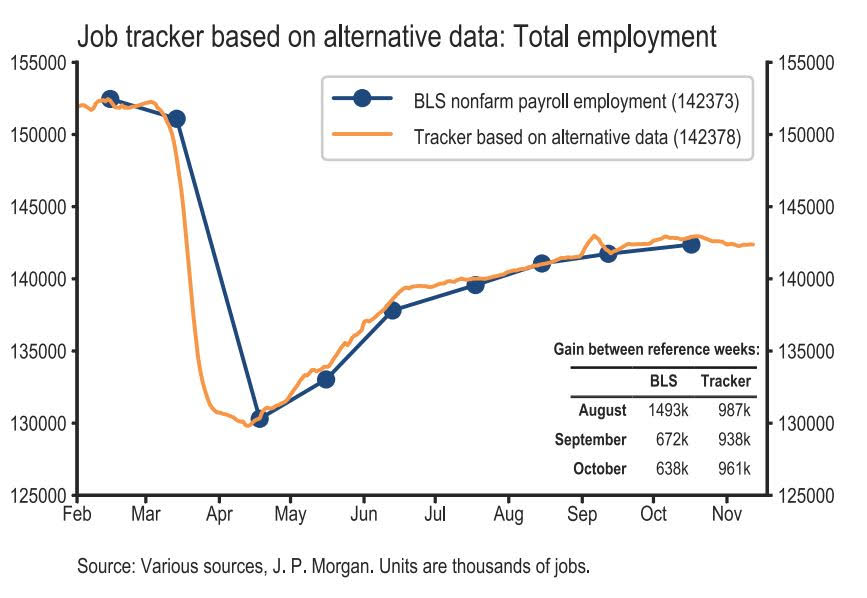 Now granted, since this spring there have been various times where it looked like alternative data had stalled out in some way, and in general those turned out to be blips. The economic recovery has proven to be faster and more durable than almost anyone anticipated back in the spring. However, we're clearly far below potential now, with millions unemployed, so any sign that the risk is once again to the downside should be taken very seriously, especially by policymakers.

We're in a weird spot, because with progress towards a vaccine apparently moving swiftly, there's arguably a bright light at the end of the tunnel. But the here and now is bad and getting worse. The entire premise of the initial relief back in the spring was that the Fed would calm the credit markets, and CARES would replace lost income, and it would all serve as a bridge to get to the other side when the virus is gone. Well the virus isn't gone, but in several months it may be. We've seen that the relief model works. The case for building an extension bridge with another aide package to get us to the vaccine, while minimizing the damage in the here and now, is as strong as ever.

The world's most influential leaders will be there. Will you? Click here to join Bloomberg New Economy Forum for a virtual Global Town Hall on November 16-19 and be part of change in real time.